Over on Talomir Tales there's a Rally Round the Kings campaign that's been going on for quite some time. Recent events over there have provided me with the back story to try out a bonus Warrior Heroes - Legends Encounter called Assassin.

Assassin is a Raid: Defend variant where some unknown party has sent an assassin during the night to kill a major character, in this case the mercenary general Nuno Pereira in the employ of the ruler of Mirish.

The Encounter takes place in the Mirish camp after the victory over the army of the Tropilium Northern Marches.

It is the dead of night, two guards stand watch at the entrance to the tent of General Pereira.
Fresh off his victory days before he is sleeping in his tent. But all is not well... 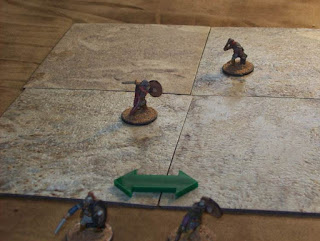 The game starts with the assassin inside the tent and within charge reach of the target. Activation dice are rolled and the General goes first. He immediately calls for the guards. 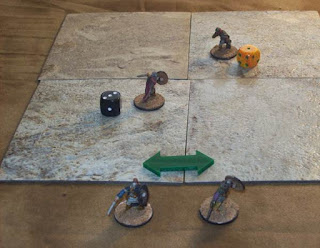 Calling for the guard is represented by rolling 2d6 versus their Rep. Both pass 1d6, this means that the assassin has previously kiled them both! 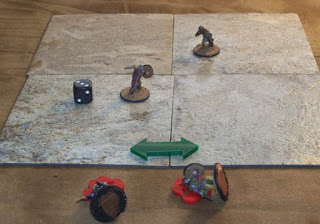 Grabbing a sword (the figure to the left shows a shield but he does not count as having one) he charges the assassin. Now it's time to roll and determine the Rep of the assassin. Luck is with Pereira, as the assassin is Rep 4, one lower than the general.
The In Sight is taken and the general charges into melee.
A round of combat is fought with the two figures rolling the same number of successes. The two are evenly matched! 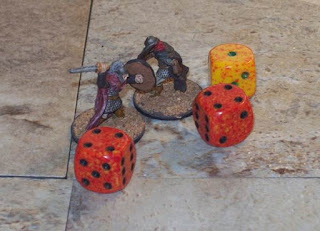 The assassin now carries out his In Sight action and it's to continue the melee.  Both sides roll 6d6 and luck is with the general as he scores 2 successes more than the attacker.

Rolling for Impact, the difference in successes, Pereira scores a 4. This causes the assassin to take the  Recover from Knocked Down test. He scores pass 0d6. 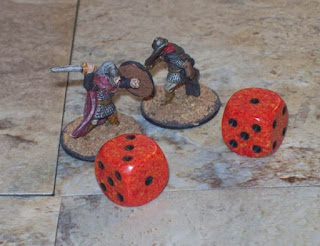 The assassin is killed. Another guard was later found dead. 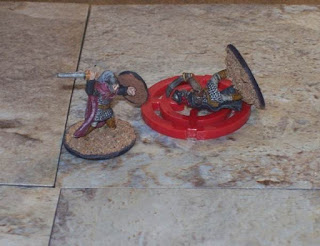 *****************************************
The Encounter was easy to play and was quick. I rolled very low and that produced only three guards. One interesting mechanic is you have to roll 2d6 for the total  number of guards. 1/2d6 are placed at the entrance to the private quarters and the rest can come to help after the first turn. The interesting part is that every guard gets rolled for and if you pass 0d6 the guard has been bribed to assist the attacker. This means you can never be quite sure what you will be facing. There also is the possibility of assassins of other types and races but for this story line I decided this the assassin was sent by someone in the Mirsih Royal family.