With Warrior Heroes -Legends on schedule for an early January release I decided to create a character and go Dungeon Diving.

I rolled up Haldor, a Rep 5 Star, human Warrior from Mirholme (think Viking). Haldor is a young warrior with a tolerant attitude (Twilight Alignment- between Red Sun and Black Moon). He has a People Skill of 5 and a Savvy of 4. This makes him good at interacting with others and a bit above average when needing to think and solve problems.

His Attribute from his Class is Swordsman. When he scores damage in  melee he can roll twice and take the best result. As a Star he is allowed two more Attributes, one rolled at random and the other he can choose.

Rolling at random was how he ended up with the Drunkard Attribute. Before each adventure Haldor would have to roll to see if he was drunk. Roll a "6" and he's drunk. There's three type of drunk and once you roll  the first time he defaults to that all the time.

I chose Resilient for the other Attribute. Once per Encounter Haldor can count an Out of the Fight result as Stunned instead. There are over 60 Attributes so characters can be pretty unique.

Haldor was AC 4 and had a sword and shield. He has 2 Food Items (enough for him for two months) and 2 Gold Talos to buy things as needed.

Haldor recruits two Mirholme Warriors, Rolf - Rep 5 AC 4 Sword and Shield and Frenk - Rep 4 AC 2 with two hand axe. Rolf, being a Rep 5, would be a short timer I figured and cut out on his own after the first or second Encounter. 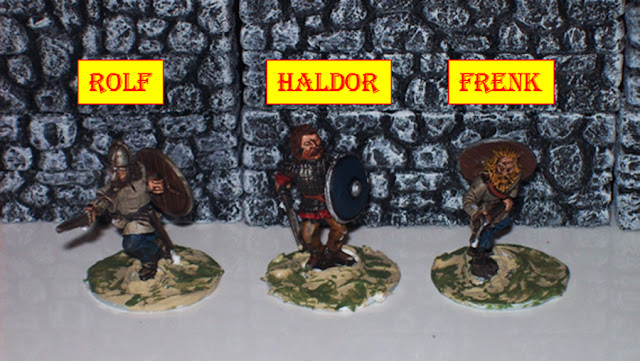 For the first Encounter Haldor would go dungeon diving. But first I needed the particulars. First up is who is the guy in charge of the dungeon or Big Bad, just like used in Warrior Heroes - Armies and Adventures.  As the adventure is in Mirholme only certain monsters are to be found. A 2d6 roll determined the Big Bad to be a Goblin.

Next I needed to find out how active the dungeon would be. This is done by rolling up the Dungeon Encounter Level based on the Big Bad. The result was a 3. So this meant...

Haldor was going into a Goblin Lair with an average chance of encountering anything.
After rolling to see if Haldor was drunk, (he wasn't) it was time to enter the Dungeon.