A historical campaign using Rally Round the King.

Rally Round the King is the fantasy mass battle rules set from Two Hour Wargames. Set up to work with any figures that are already based, units are stands of 1 to 4 figures. Although designed for fantasy battles, Rally Round the King can trace its roots back to the original Warrior Kings released in 1998. Warrior Kings was a historical set of mass battle rules and inspired the spin off Warrior Heroes in 2002 and is now RRtK.


The sweet thing about RRtK is that the armies are based on historical counterparts and if you remove the magical elements of the rules you have a solid historical game.
I decided to pull put my 15mm Italian Wars figures and put together a solo campaign that I could play at my leisure. Using the Capalan League Army List from the book, which is based on the Italian Condotta army, I pulled a map off the internet and recruited the six city states for the campaign. In the original Warrior Kings all of the diplomacy was handled by the game mechanics and the same holds true for RRtK. Basically, players are the generals with all declarations of war and enforced peace treaties being handled by rolling dice modified by the results of each battle that is fought. Win battles and your Major Morale goes up, lose and it goes down. This simple mechanic relieves the player of major book keeping so playing multiple nations is a breeze.
Deployment, army composition, generating terrain, and battle tactics for each army is handled by the rules. Here's an example of what happened to start off the campaign.
·         Spring 1494 - Each nation starts with a basic army and a number of Recruiting Rolls. The rolls will tell you what addiotnal army units you receive at the start of the year.
·         Generals were rolled for and named.
·         The each nation rolled to go to war.
·         The results were that Naples would go to war and as the only country it bordered were the Papal States that was with who they would go to war.
·         As Naples is the aggressor the battle would be fought in Papal territory. Exactly where isn’t important and could go back and forth based on who lost the battle.
·         Terrain was roiled up for the battle.
·         Battle tactics rolled up, based on the army type, in this case "C", and each side was deployed according to the result.
·         The battle starts and the battle tactics dictate how the armies move at the start.
One of my favorite things about RRtK is that you are commanding armies. All you can affect, as the general, is deployment, overall battle tactics, when to commit reserves and if and when you enter the combat itself. This means that the actual number of decisions you make for each side is small but each is very important!
Here's the basic Italian Condotta Army List. I will be writing the battle reports in two styles. Normal text will describe how the battle plays out in "real life" while the italicized text sheds a little light on the game mechanics.

War!  It's tradition that when the winter snows melt in spring the petty princes of Italy go to war. Throughout the land word comes of the first act of aggression. Naples, to the south, has invaded the Papal States. The Pope, taking the moral high ground, sends emissaries for aid while denouncing the uncalled for aggression of Naples. As expected, no aid is sent, no denouncements are made as each City State plots their next move.


After much maneuvering and refusing of battle on the part of the Neapolitan Army, by the end of spring the two armies faced off across the shores of a large lake. The Papal Army deployed on high ground on one side of the lake with the majority of its force, mostly the knights in the center. Their idea is to absorb the initial Neapolitan attack then counter attack.
The Neapolitan commander, Duke Nicolas, was forced to make do with the terrain as spring was coming to a close. Not to have fought a battle after declaring war would have sent the wrong message home and it was more a matter of bad luck than apprehension that had caused the delay. Duke Nicholas held the Papal Commander, Duke Paolo, in such disdain that he had decided on a frontal assault in hopes of penetrating the center, killing his counterpart, and bringing the war to a quick end.
The forces were deployed and the battle followed quickly after. 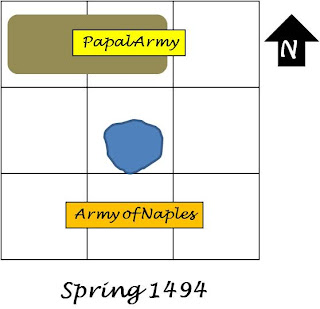 Part Two
http://2hourblog.blogspot.com/2011/10/for-part-one-see-http2hourblog.html
Posted by Ed the THW Guy at 13:27
Email ThisBlogThis!Share to TwitterShare to FacebookShare to Pinterest