Armed with the clue gleaned from the Watch last night. Being the second night the PEF's were more likely to yield results. In addition the clue would allow a greater chance of  altering the type of contact discovered. 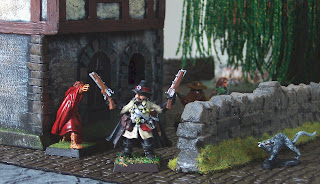 Possible Enemy Forces (PEF's) were out in force as the first two activation rolls generated more of them.
Still it took our heroes a couple of turns to run the first one down which turned out to be... 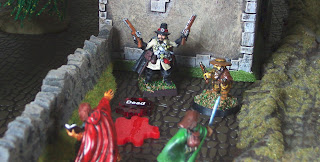 ...A corpse. I could have used the clue to alter it to the Watch or a reveler but chose not to. The corpse offered up the chance of another clue without the difficulties the other two types of encounter could entail.

Indeed Brother sergeant Hengist was able to put his keen investigative skills to use and found yet another clue!

Just then another PEF moved into contact from across the lane. The PEF turned out to be... 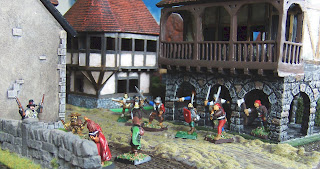 ...Bandits! This had actually come up Tyros and could have been changed to Watch or Bandits. Given that a larger party might actually scare the Fiend into hiding I decided to tough it out and accept attack by the bandits. 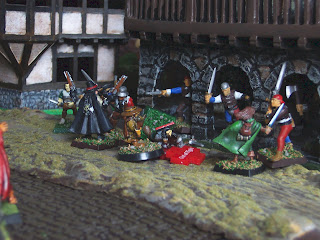 Which could have gone horribly wrong as it turned out that these bandits were led by  a Rep 6 Hardiness 3 villain, who had two Rep 5 Hardiness 2 sidekicks, one Rep 4, and 4 Rep 3 accomplices.  Although they attempted to charge we were able to charge first! Bors took out his man while Hengist and Silva remained locked in combat. Alphonse was left behind as Casters are often of more use behind the fight. 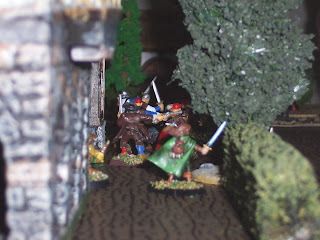 Quite surprisingly the leader of the gang retreated in reaction to the loss of his sidekick. The rest of the gang either fled or retreated with him. Hengist, Bors, and Silva gave chase and put them all to flight!

Presently they disappeared from view and the most horrendous screaming came from around the corner where they had vanished.

Wererats suddenly appeared and launched a barrage of sling stones at our heroes. Fortunately the rats aim was wide. There confronting the party stood eight rats. Four Rep 3 slingers (one Hardiness 2), two  Rep 3 Hardiness 2  pack rats, one Rep 4 Hardiness 3 armoured warrior, and their leader a Rep 5, Hardiness 3 Assassin. Here then was the Fiend of Bricole brought to bay! 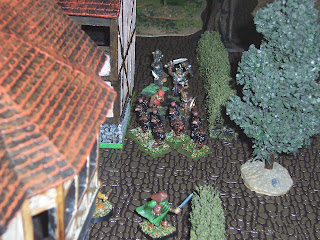 Or rather the vile ratman had turned to face the baying hounds.  The assassin urged his minions to charge, which they quite firmly refused to do.

Seizing the initiative, Silva loosed a shaft, dropping one of the skirmishers. 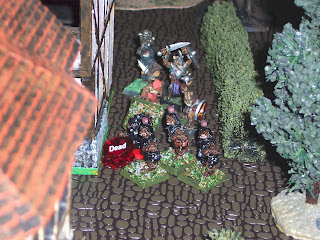 All but two of the rats fell back. One fled. The armoured rat and a slinger held their ground. 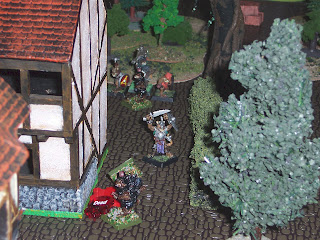 Bors followed this up with a pistol shot that neatly dropped the nearest slinger.

With Alphonse now dangerously left behind with vicious wererats on the loose, Hengist sent Silva to protect the mage. Hengist charged the armoured rat who now blocked the alley like Horatius at the bridge, 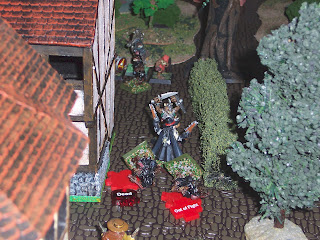 Defeating this skillful vermin would not prove an easy task. As Hengist and the armoured rat remained locked in their struggle until the end of the game. The combat moved back and forth along the alleyway with neither fighter able to land a telling blow. 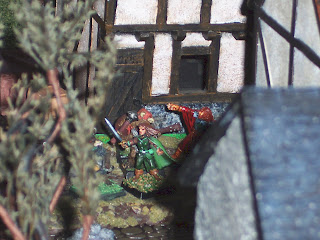 Silva arrived just in time to aid Alphonse as the rat leader and his minions attacked. Silva loosed a shaft and the last slinger slumped to the ground. 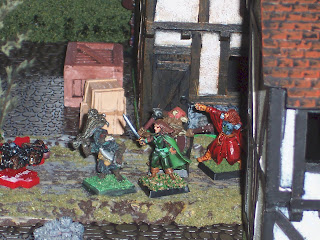 The Fiend and Silva traded blows, the elf all too conscious of the foul poison dripping from the assassin's blade.

Alphonse proved an able foe, dueling with two pack rats, and even driving them back for a time. 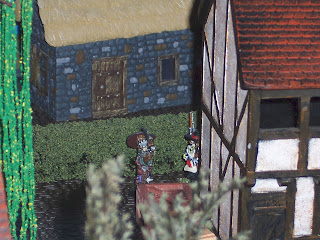 Hengist had almost force his rat back out of the alley, yet still could not gain the upper hand. 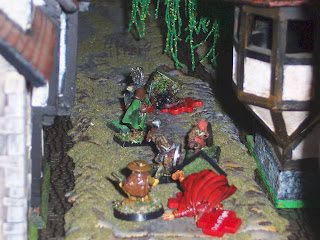 At last numbers told and Alphonse fell, clubbed by the wicked wererats. Bors arrived too late to save the mage. 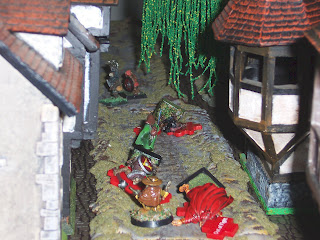 But not too late to exact vengeance on his assailants. A quick pistol shot and one of the pack rats fell.

At this the remaining pack rat fled. Not fancying his chances against both Silva and Bors the assassin faded into the night uttering a blood curdling cry....

...which served as a signal to the armoured rat to break off his combat with Hengist and made a break for it.

This was rather a trying encounter. The bandit attack should have been harder to fight off, only a couple of lucky dice rolls saw them flee.

The wererats on the other hand should not have been so difficult to overcome. They were rats of steel I tell you.

The encounter system worked well I think and it was quite suspenseful gathering clues and finally encountering the Big Bad. I had hoped it would be wererats but the result stemmed from random generation. Lucky in that I suppose.

Next up will be a pursuit encounter to see if Hengist and co. can finally end the threat posed by the Fiend of Bricole de Gribeauval.