The Fiend of Bricole - Take Two 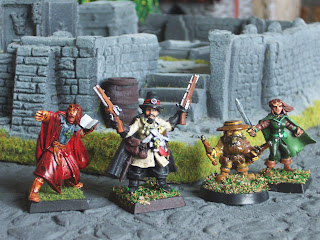 This was going to be the second night of the hunt for the Fiend of Bricole de Gribeauval. However in the intervening time I had expanded on the scenario significantly. In the end a fresh start was in order.

The setting is as before, although the layout of the neighborhood was randomly rolled to give a slightly different playing are, below: 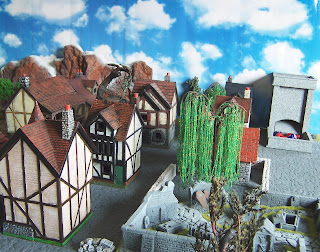 Each night takes place in a different neighborhood. Each set up requires nine scenic elements which are placed randomly within one of each of the nice squares. Rather than have a table listing particular items like; church, inn, hovel, I've decided to leave it as players' choice just which scenic items to use. This will allow players to more freely use what they already have. A scenic element could be a wood, or ruin, or whatever strikes the players' fancies. 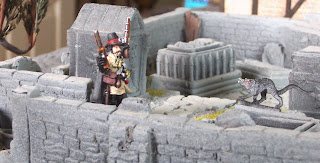 Once again play started in the south east corner of the table and, moving first, a PEF moved into the cemetery so located. 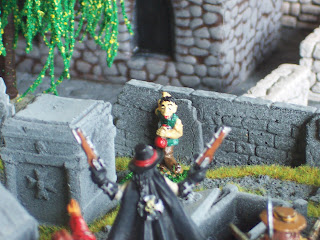 ... a reveler.  This fine fellow was sufficiently overawed by the appearance of one of the Brethren to immediately offer up all that he knew of the fiend which, sadly,  was naught. However his very presence was problematic. You see were Hengist to simply ignore his presence, and should he later end up dead, it would reflect badly on Hengist's character and cost him an activation roll. Hengist could detach one or more of his party to escort the unfortunate to safety, but with only four in his party this was an unacceptable loss of strength as either party might be fallen on by the terrors of the night.

In the end it was thought best to bring the fellow along and to protect him as best as possible. 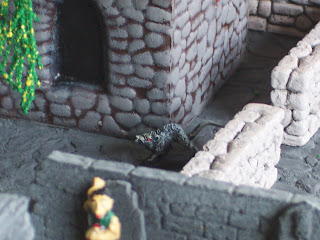 Turn two doubles produced a new Possible Enemy Force (PEF) that appeared in the church yard right behind the reveler.

Undeterred, Hengist moved to confront the new PEF which turned out to be... 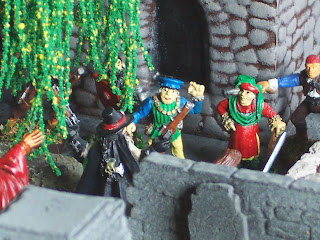 ... a party of Tyros, four nobles with more attitude than sense and six of their bodyguards.

The nobles were not impressed by Hengist's threadbare appearance and yielded neither assistance nor clues. The nobles would continue to hunt the fiend on their own.

Well this was particularly bad news. The game is setup so that one must be very lucky to catch the fiend on the first night out as befits the parameters of the genre. However having large parties in the neighborhood makes catching the fiend even less likely as large parties will likely cause any stealthy entity to  lie low.

Onward marched Hengist and co., trying to wish away the boisterous sound of the noble party behind them. 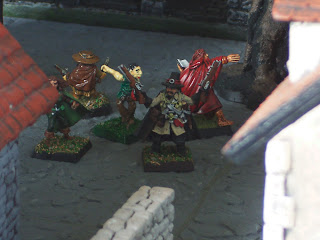 The third PEF encountered turned out to be naught at all other than some rats scurrying about their ratty business.

The final PEF resolved into... 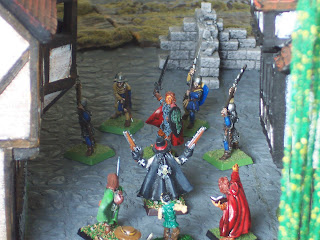 ...a patrol of the Watch! There would be no stopping the fiend tonight as clearly it had chosen another neighborhood on which to prey.

Still this encounter was not a total loss. Hengist was able to use his Investigate skill to ween some useful information from the leader of the patrol.

Stay tuned for the next night and thanks for dropping by!

Posted by M. C. Monkey-Dew at 15:27
Email ThisBlogThis!Share to TwitterShare to FacebookShare to Pinterest
Labels: Warrior Heroes Armies and Adventures