The Fiend of Bricole de Gribeauval

This game was the first play test of an urban mini campaign for Warrior Heroes: Armies and Adventures. The plot will be familiar to fans of fantasy fiction. A family has been found slaughtered in their very beds. The work appears to be that of a monster or monsters. The towns folk of the city are on edge. The Watch has doubled patrols for the following evening. Enter our Heroes!
Still making his way towards Havenbrook to investigate the massacre of a Brethren party there, Brother Sergeant Hengist stays the night in Bricole de Gribeauval. Local authorities are quick to call on the Brother's expertise in fighting the Dark.

Each game represents one night spent on patrol. Each night lasts as long as it takes for the party to check out all Possible Enemy Forces (PEF's) that start or enter play. The mini campaign lasts until the fiends or the party are destroyed.
The game starts with the party on the south east corner of the table. The table is divided into 9 squares of any convenient size. Here I used about 8 " squares giving a playing surface of about 2 foot square.
Each square contains a building. In this game at least the buildings are just there to create streets and allies through which the figures must navigate.
While the game takes place in the dead of night I didn't figure you all would appreciate really dark photos so consider the above evocative of the atmosphere where the other photos are rather bright.

There were 3 PEF's at start, placed randomly on the table. I used rats but any counter would do as well. These PEF's could be augmented by new comers when doubles are rolled for activation. Any PEF's generated in this fashion will appear by moving out of  a building chosen at random.
PEF's being PEF's they tend to move a bit. This game uses a different method than that in the main WHAA rule book. They tend to either be attracted by noise or repelled by it and act accordingly.
Naturally as with any new way of doing things, a PEF had to run out at me from behind at the first opportunity  Fortunately it turned out to be a false alarm. Again the method for determining if a PEF is something to worry about or just a case of the jitters is different in this scenario.

The next PEF also turned out to be nothing. I had spawned maybe 3 or 4 new PEF's as I blundered around in the dark.
By the time the next rat ran out of a building to surprise me, I had learned to have the party looking in different directions to prevent too much of a surprise.
This PEF turned out to be a band of robbers. One was Rep 4 and Hardiness 1, while the others were Rep 3. This game also uses a different manner of determining who and what a none jitters PEF turns out to be. This is partially based on the player characters' stats to provide a reasonable challenge.

As they made threatening gestures Sliva sent a couple of arrows their way. One missed but one skewered the leader good. 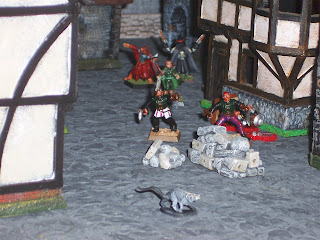 That was more then enough to show the others that this party was no easy mark and they beat feet. 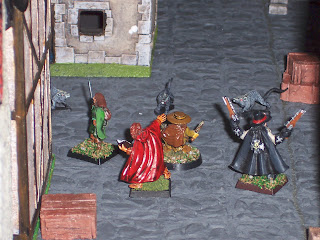 Meanwhile the noise of the scuffle drew ALL of the other PEF's to the party.

As it happened they were all false alarms.

As dawn broke the heroes head back to the inn, their night's work in vain.

Somewhere in the city another dwelling had been raided, the inhabitants slain.

Will our heroes stop the killings before an enraged populace decided the strangers must be the cause of their  woes?
Posted by M. C. Monkey-Dew at 17:01
Email ThisBlogThis!Share to TwitterShare to FacebookShare to Pinterest
Labels: Warrior Heroes Armies and Adventures