Starting a new campaign with the 5150 Star Army - Citizen Soldier new rules and a few add-ons and tweaks:


The known universe consists of Nine Rings or Bands of Life. Each Ring contains numerous Planets, from Class 1 to Class 3, as well as inhabited smaller Planetary Colonies and innumerable smaller clusters called Rocks. Gaea Prime considers her proper place to be in the center of the First Ring, the center of the universe. But that is the future. In the beginning there was only Gaea Prime, floating in space in a dream of isolation, waiting to be awaken.
Then the Hishen came.


Highly advanced spaceships surfed across Gaea Prime skies stroking terror across the planet. The alien ships did not respond to any messages from Gaea Prime and soon many people started to disappear. After the initial panic of an alien invasion subsided as it became more clear that, it came the realization that they weren't an alien race at war with the nations of Gaea Prime, but an alien company seeking profits by exploitation - a small Hishen slaver fleet. But the people of Gaea Prime knew there would be more, and each new alien species would join in on the depredation of Gaea Prime, competing among themselves for the spoils, like a pack of scavengers on a corpse until their planet lay in ruins.


Once they realized that rather an invasion they faced a steady onslaught of brutal raiders and opportunists the inhabitants of Gaea Prime realized this was a two-way street. Each new alien attacker they defeated represented a chance to gain invaluable information and precious alien technology that would allow them to reach the stars and fight back on equal terms.

The Gaea Prime central government that emerged from the collapse of individual nation states created special units to seek out and in alien invaders – not to defend, but to grab as much alien technology and information they could. With their military resources stressed with planetary defense and critical crash R&amp;D programs, the Gaea Prime government contracted private companied to help. But soon these corporations begin to competing with the government, forming their own secret units to gain the the cutting-edge alien technology that could help them gain market dominance and power for themselves. Soon it became an ultimate survival race against the aliens, with the Gaea Prime government competing against its own corporations.

Gaea Prime government reacted quickly, severing official cooperation with corporations and creating the ASI, Alien Studies Institute, to analyze and classify every single new alien species and more importantly, build up the Star Army. The best soldiers from Gaea Prime were reformed into elite squads specifically trained to fight the threat of invaders from space.
“We take the war to the enemy”.

The first mission is a Raid. The Star Army has to capture as many aliens and artifacts as possible for the Alien Studies Institute (ASI) by engaging them in combat. Bonus mission for retrieving new different alien species. Extra bonus if they are alive. Also bonus for cleaning the area by chasing off all PEFs, enemies and 3rd Parties on the table

I divided the table in nine equal sections, chose a border to deploy, generated terrain and Possible Enemy Forces (PEFs), in that order. I picked up two squads for this mission and deployed 1st Squad on section 9 and 2nd Squad on section 7. PEFs were randomly generated on sections 1, 2 and 3. 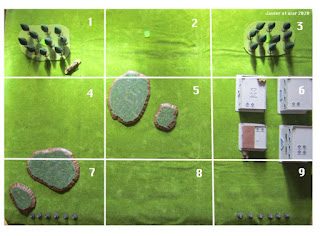 Turn 1. I rolled for activation and Hishen didn't move. I moved my 1st Squad forward and then had to resolve PEF in section 2. It was nothing but now I would be rolling 3d6 instead of 2d6 to resolve following PEFs.
I moved 2nd squad to the rigdeline of the hill on section 7 they had in front of them. 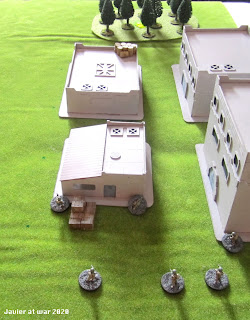 Turn 2. Hishen activated but only the PEF on section one moved. I resolved it and a section showed up. 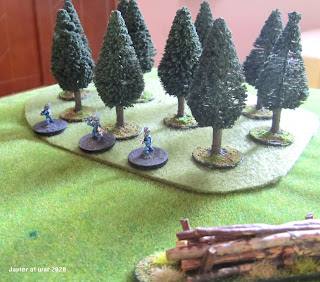 2nd Squad won the Reaction Test and fired at will, killing all three Hishen in one go. 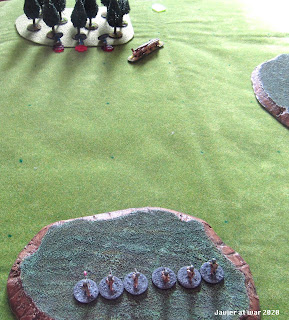 Turn 3. Sgt. Burke from 2nd Squad ordered Cpl. Lance to take a section and check those shot down Hishen in the woods.
A section (center of the map) from 3rd Squad came in to support the boys. 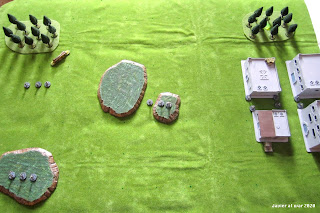 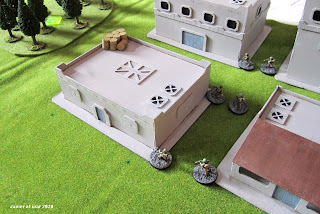 Turn 4. The remaining PEF on section 3 finally moved. It was another section; probably the rest of the squad from the one in the woods. 1st Squad won the initiative and fired at them. Two Hishen resulted Obviously Dead (OD), but the third one returned fire and killed (OD) corporal Jon! 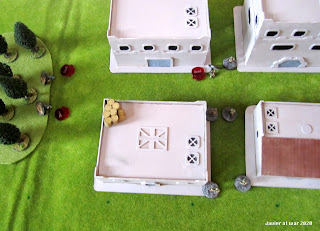 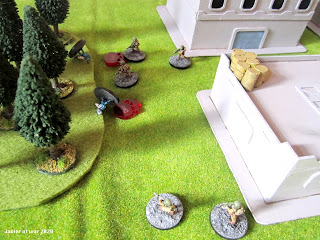 Turn 6. The section from 2nd Squad finally reached the wood and checked for dead. One of the Hishen wasn't dead and threw a grenade that killed (OD) himself plus one grunt, and incapacitated another one (OOF). Corporal Lance miracously escaped from the blast and dived for cover, resulting pinned (Hunker Down -HD-). That was the end of the mission. 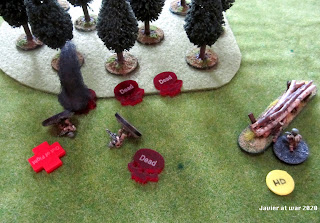 Finally, I went to the Research and Resources Table and chose one field of investigation to help me to improve my troops to fight off the aliens from Gaea Prime. I chose Alien Alloys with the hope of getting better armor for my troops later on. Then I rolled in the R&amp;R table and got "research in progress", meaning after second mission I'd successfully research that field.

As the Raid was a success, next mission will be Attack.
Until then.