Billy Pink and his crew have come into contact with a Hishen Slaver. The Hishen have demanded that the LA Woman surrender and prepare for an "inspection". Billy has other plans and the fight is on!

Billy and the Hishen receive 1d6 per each point of Rep. Billy will always roll at least 5d6, the Hishen 4d6.
In addition each receives twice that number in Bonus Dice. These track burning up fuel. Roll them like the Rep Dice, trying to score a success - score of 1, 2, or 3. Roll a 6 and you lose the Bonus d6 for the remainder of the fight.

You can gain additional d6 and successes based on Attributes, Race, and Circumstances. Having a greater Thrust gives you +1d6 on the Dogfight Table. Get down to "0" Thrust and you can be boarded. This is a major concern as the LA Woman's Thrust has been reduced to 1 from the damage it took earlier. 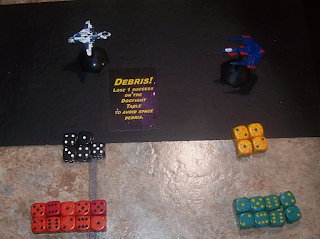 At the start of the turn a Chance Card is drawn by a player. This represents an unforeseen occurrence that could affect the fight. Billy draws first and scores Debris - Lose 1 success due to having to avoid space debris. 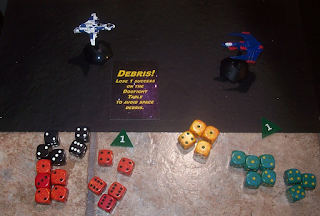 Dice are rolled and the Hishen wins - scoring 2 more successes than Billy. This gives him a +2d6 Bonus on the Taking Control Table. 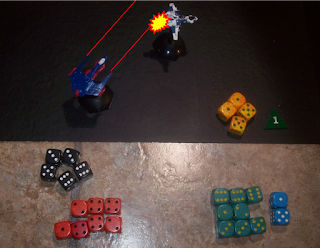 The Hishen wins again and by 3d6! Targeting the engines of the LA Woman, he fires and scores 2 hits. This brings its Thrust down to 0 with the excess damage being loss. 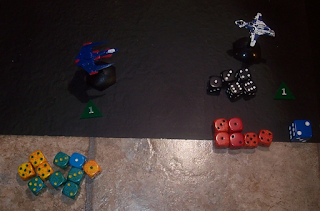 The next three turns consist of Billy going Purely Defensive on the Dogfight Table. If he loses, the Hishen can board. Billy continues to fly for three additional turns, both he and Hishen losing Bonus Dice. Billy's plan is to have the Hishen burn up its Bonus Dice then switch to the attack as he will have more Rep d6. But it didn't work out that way.

Unfortunately the Hishen wins on the Dogfight Table and can now board the LA Woman.

As the Hishen crew prepare to board, Billy organizes its defense.