Thursday Day Time and its back to the Advance the Investigation Table in New Hope City PI.  A few dice rolls turn up another Smuggler. When you hit the same Profession that you have questioned previously in the case it means you can re-question that Person of Interest.

That would be Tatiana, the Smuggler  from Part 8. Rolling on a few tables had Billy able to find her at the Pub & Rec area, in a theater. I decided that a Fight Club would be more along her tastes so figured to "double-dip". I set up a MMA fight for the upcoming Red Streets Blue Mats. 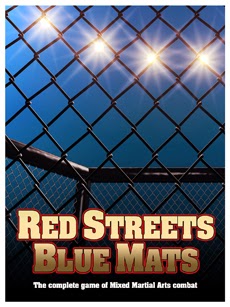 RSBM uses the same mechanics as Red Sand Blue Sky and is a set of modern day Mixed Martial Arts rules. But just like Alien Fight Night, which is based on Friday Night Fights, Red Streets Blue Mats can be used with the aliens in 5150 New Beginnings. I selected two pre-generated Non-Player Fighters, a Striker and a Grappler. With twenty plus styles of combat there's a wide selection to choose from. I designated the Vangore as the Striker and the Fezglok as the Grappler.  More on that during the match. I set up the match with my 28mm figures in attendance. 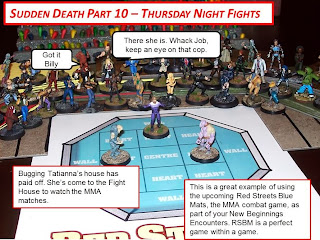 I counted Billy having bugged Tatiana's house as a +1d6 modifier towards getting a chance to talk to her on the Excuse Me Table (used to see if you get close enough to talk). 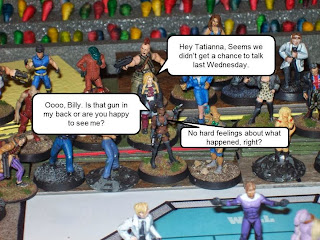 I placed him in the row behind and above her and had him pull his BAP to gain a +2d6 advantage during Questioning. Billy recruited Whack Job from a previous Encounter to use as backup and brought Ashlynn Cooper along as well. 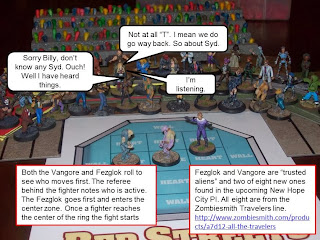 I alternated moving the fighters while rolling on the tables to question Tatiana. 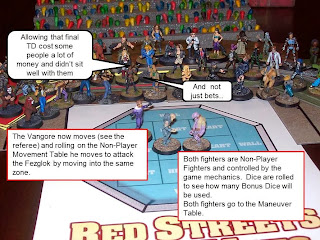 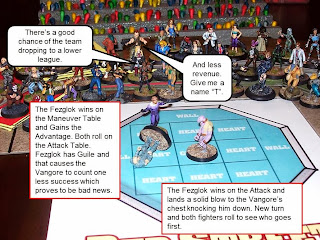 The actual questioning was completed and Billy counted as solving a Clue. 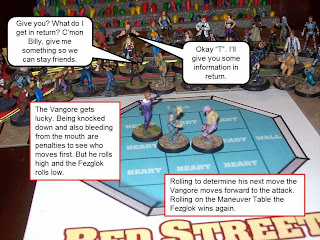 He next went to the Advance the Investigation Table and rolled another Person of Interest. This was provided by Tatiana I decided. As I rolled the same Profession as Mr. Gakspar, the team owner, I decided Billy would go back and re-question him 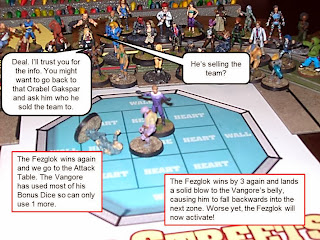 As this was going on so was the fight. The questioning was finished first so I continued the fight to the end. 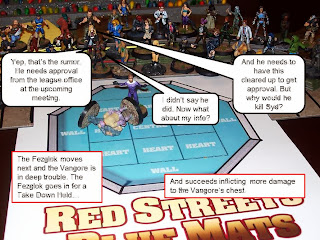 At the end of the Encounter I had fleshed out Tatiana and added her to my Usual Suspects of New Hope City  for future use, saving me time in future games. 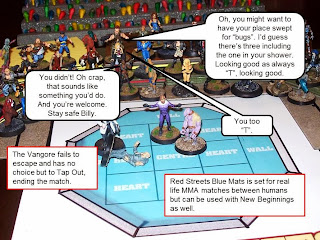 The fight worked out well with the Fezglok using his Bonus Dice advantage and the Guile Signature coming into play twice, much to the displeasure of the Vangore. I now also had two additional Exotics -  Athletes to add to the Usual Suspects.

Tomorrow would be Friday and Billy had solved six Clues, two more and he could solve the Crime. Billy and Ashlynn Cooper left the Fight Club and headed off the table. More on this one later this week as things did  not go smoothly.