On the way back from the MMA match at the Fight Club (Part 11) Billy and Ashlynn take City Transit back to the Financial District where she has a High End Condo.

It's the Evening and the train is almost empty. Just a lone woman and a group of aliens, a Buardeem, a Lerksah and a Nonne.  The train stops at Middleton and the others get on board.

As Billy and Ashlynn continue their conversation the three newcomers (Gangers) spread out. Billy can hear the first Ganger trying to shake down the aliens.

Billy acts fast, taking out the Ganger nearest to him with a combination of punches.

Hearing the commotion the two Gangers turn to face Billy who jumps the leader and takes him out too. But the last Ganger turns around and ...

Before he can move the Ganger is struck down from behind.

At the next stop the transit cops, called by Ashlynn, enter the train to make an arrest. As the aliens tell their stories Billy, Ashlynn and the woman exit the train.
***********************************************
Okay  so here's what happened. After the Fight Club Billy has to return to Home. So I have them take City Transit. It's easier to move about quietly on City Transit instead of using a vehicle. Here's an example of what can happen when you drive your own car.  Where is Ashlynn Cooper? 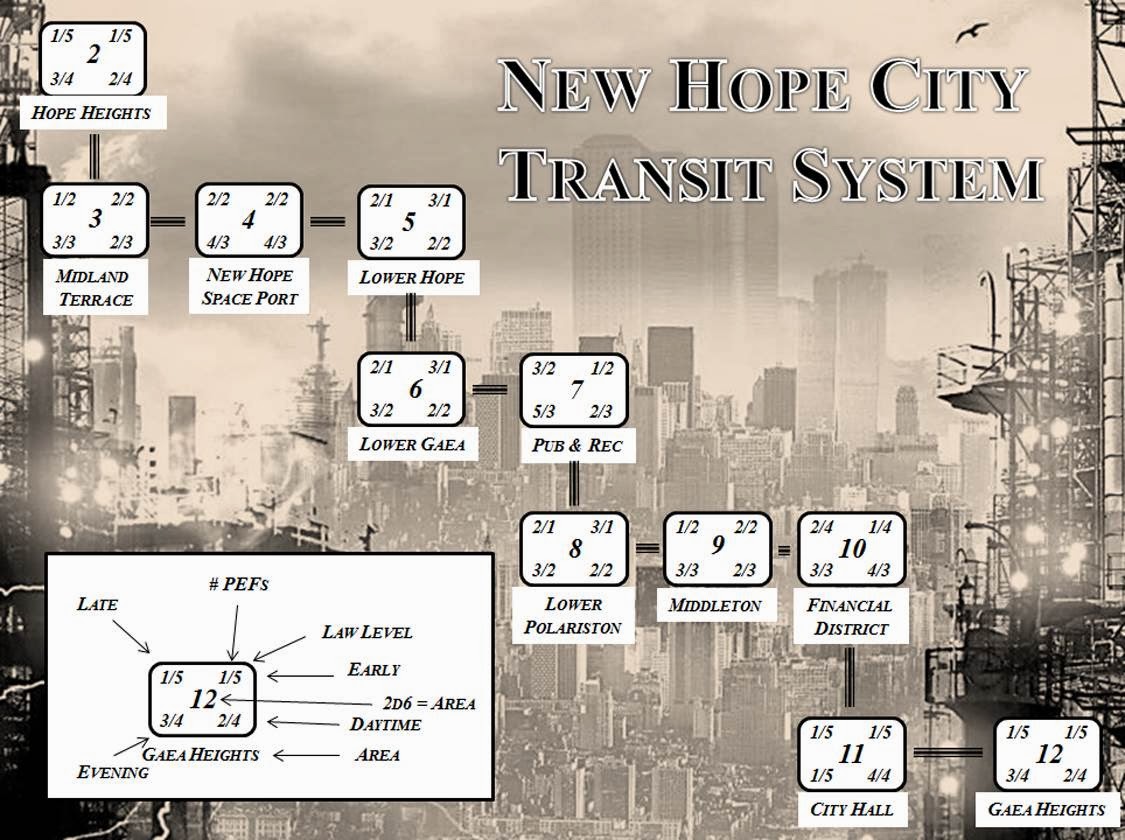 Every time you enter an Area of NHC you have a chance for a Travel Encounter. The odds are not great (1) but it can happen. So when they enter Lower Polariston I rolled, then Middleton, I rolled and then the Financial District. Bingo! Travel Encounter and it's witnessing a robbery.

Things on the train are a little different from a normal Encounter due to the cramped quarters. Using the Area (Financial District) and Day Part (Evening) meant 3 PEFs which converts into 3 NPC groups.

Rolling them up I scored a character I had previously met, rolled some more and it was the girl at Mr. Gakspar's office when Billy got the job.

The other group was three aliens, three of the upcoming Trusted Aliens that will be added to NHC in the upcoming months.

The last group was three Gangers, I rolled for the target of the robbery and it was the aliens. I split two gangers off to cover the non-targets and one to do the shake down. Their plan was to get on at Middleton, rob the passengers, then disappear into the Financial District.

Once the Ganger started the Robbery and the other ganger confronted Billy it was In Sight time between Billy, Ashlynn and the Ganger. The other gangers were not facing the right way to be involved. Billy went first, the Charge into Melee was taken and Billy OOF the Ganger in melee.

The Gangers activated next and turned around. They were now facing  Billy and Ashlynn and so were the Aliens and the woman. The Lerksah went first but failed his 1d6 roll to act, the woman went next and did act. She charged the last Ganger and won by one in melee. She scored a knock down and the Ganger passed 1d6 on his Recover From Knock Down Test so went OOF. This was lucky as the Ganger was next then Billy.

I figured they could watch the OOF Gangers until they reached the next station when the transit cops could take it from there.