When you don't pay your bets... New Encounter for New Beginnings.

In this Encounter the player and the bet taker have met each other and not on the best of terms.  The character wanting to collect the bet has cornered the welching character.  You can use this for any confrontational Encounter between characters, not just welching on a bet. Some examples would be jealous ex-boyfriend, disagreement at a bar, road rage, the list goes on.

Ashlynn Cooper  made a very large bet on Xarzen and is trying to delay paying it off until she can get some money. For more on Ashlynn see the following.

Ashlynn has hired Billy Pink to provide protection for a week or so and they are confronted in an alley by a known Stims Dealer who had taken her bet. This was determined by the game mechanics in the NHC boxing game still in play test. As I needed to play test the Encounter I figured I'd catch up on Ashlynn.

The set up is the two groups are 3" apart, neither have weapons drawn. It starts with a Talk the Talk Challenge, specific to the Encounter. It quickly gets out of hand with Ashlynn and the dealer exchanging harsh words (scored same number of successes). This caused an immediate re-take with the welcher (Ashlynn) counting a -1d6 penalty. This time the dealer scored more successes. He wants his money, she really can't pay - she has a few vices that eat up her savings - so he draws a gun. That's where we begin. 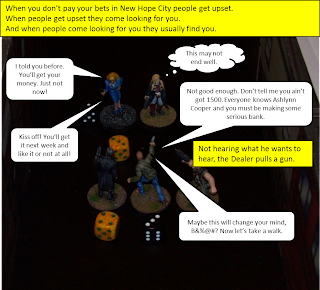 When the Talk the Talk is resolved as a Walk the Walk the two characters involved roll off to see who acts. The dealer won. He has the choice of drawing a weapon or going into unarmed melee. He draws a gun.  This completes the Walk the Walk phase and now all characters take the In Sight, as per New Beginnings, with no side counting as active. 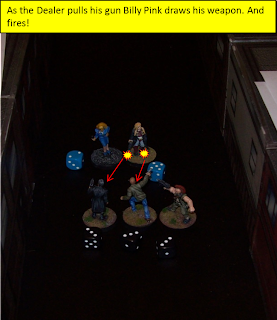 All of the gangers scored three successes, Ashlynn only one and Billy five. That was good luck. The bad luck is he could shoot first but only one of the gangers had drawn a weapon. He decided to shoot anyway and his luck got worse. Both of the gangers ended up obviously dead but according to the law one ganger was unarmed. And this is in New Hope City. 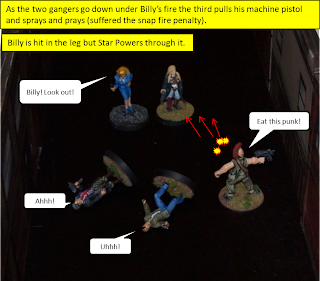 The third ganger snap fired on his turn and hit Billy in the leg. Star Power changed that to  a Carry On. Ashlynn activated and being unarmed just stood there. Didn't duck back, but just stood there. The ganger passed all his Reaction Tests and when activation was rolled scored a "6" so couldn't go. Billy fired and hit him twice. The first ganger to roll recovery died, that was bad luck. This ganger rolled recovery and died, that was good luck. Why? Because now with all three dead there were no witnesses. Even though a good attorney could argue self-defense, well, you never know with the New Hope City legal system.
The cops arrived right after Billy and Ashlynn left so that was fortunate. 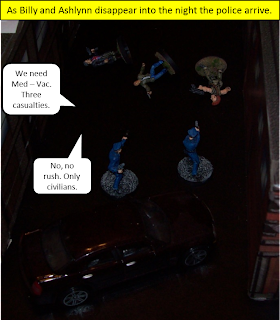 I had forgotten how playing New Beginnings has a whole different set of challenges from most of the other games. It's a big city, there's laws, police, no guarantee of a fair trial and a good chance of going to prison if you break the law.
Overall it was fun, played very quick, and is now another diversion for me. Wonder what will happen next?