Disaster in the Peninsula - Muskets & Shakos

This is a very brief AAR of the new Muskets and Shakos Napoleonics rules coming out soon from THW. It wasn't meant to be brief but it was.

It's Spain 1809, a British versus French fight.
The Encounter was a Scout mission. I led one brigade of French (1 light and 2 line battalions) with the objective to scout all the sections (9) of the table and report back what I had found.

First mistake - I didn't bring any artillery, which I could have as directed by the Encounter.

The terrain was set up, a road down the center, a few hills ahead, and a small cluster of buildings. Muskets and Shakos is infantry battalion and cavalry regiment scale.

The rules are set for 20 man infantry units but can be played with any size units. I was using 10 man units and 6 man cavalry units. Anyway, it doesn't matter and is a matter of taste and tracking hits when needed.

I entered the table with my three battalions in column and headed towards the buildings.
The  PEF markers (Possible Enemy Forces) were placed. Two were to my right, behind the hills and out of sight. One was to my left in clear terrain so would me immediately resolved.
One Regiment of Rep 5 British Cavalry.

Okay, this should have triggered an alarm but I hadn't played Napoleonics in a long time and was still learning the rules. That's my story at least.

The PEF is replaced with the figures and I go to the Non-Player Tables. Rolling a few dice I see that the Brits are taking a Defend Stance but as they are Cavalry they will charge if given the chance.They charge! 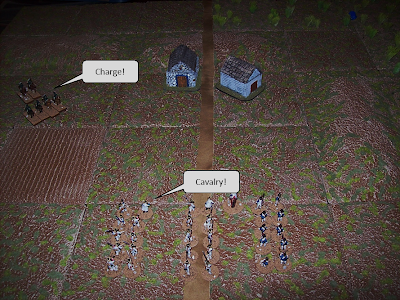 It was bad luck that they were resolved in charge reach but it wasn't a big deal. Right up to when I rolled for the Charge. They passed 4d6 while my line passed 1d6 - Very bad rolling indeed. 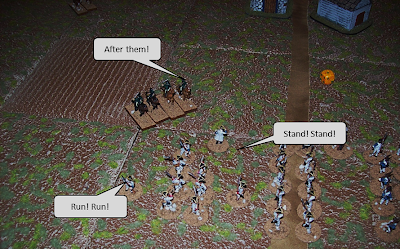 I succeeded in taking two of the British squadrons out of the battle by cleverly leading them off the table.

Okay  so actually they routed my line unit off and pursued them off the table, same result.

There's a section of the rules that goes into detail on how to deploy Non-Player figures in an historical manner. The result for the cavalry was two squadrons in line to the front and the last in reserve.
This squadron rolled for it's movement and that was to circle our flank.

I responded by moving my units into line. In fact the light unit (legere) got off a pretty good volley, scoring three hits.

This was another mistake.The most effective fire from an infantry battalion in Naps is the first fire. I had effectively wasted it and would have been better served to have kept it for when I was charged.. Even worse, I didn't go into square when I should have, the classic defense versus cavalry. Squares take time to form and there are many examples of infantry not being able to form a proper square in time. Squares take time to form and infantry went into square when they saw cavalry. 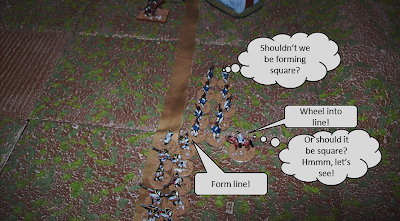 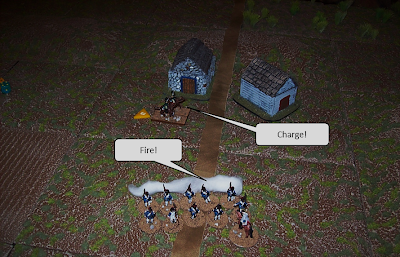 What happened next was terrible and in retrospect, not surprising. The heavy cavalry charged and caught the unit out of square and it could not fire effectively, having wasted its fire the previous turn. If the cavalry had not charged musketry would be effective on the next turn. Text book on how NOT to face cavalry. The infantry retired, was halted b y the Brigadier then promptly run down by the pursuing cavalry. Fittingly the Brigadier was a casualty. 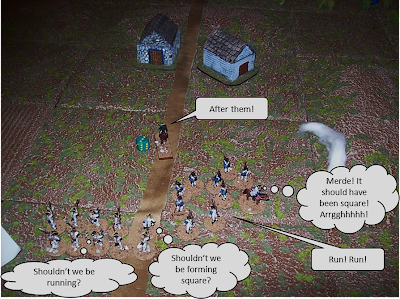 Well, it became apparent that the Encounter was a failure and I moved the last battalion off the table. True, there were some unfortunate dice rolling but the failure was mine for the following reasons:
1 - I wasn't familiar enough with the rules.
2 - I wasn't playing with correct Napoleonic tactics, which I am very familiar with.

If I had used proper tactics things would have went differently as the rules reward using them. As I didn't the rules punished me for it. Overall an enjoyable experience and I'm ready to give them another go. More to follow!
Posted by Ed the THW Guy at 10:53
Email ThisBlogThis!Share to TwitterShare to FacebookShare to Pinterest
Labels: AARs, Muskets and Shakos, Napoleonics, Two Hour Wargames