The Fight - Xarzen versus the Razor

So how did Xarzen find himself in the ring with a Razor? Well, not by design! First, let’s go over your role in the game.

You start out in New Hope City, located in the 5150 Universe; where they like to say everyone deserves a second chance. In FNF you can play solely as a fighter, as a fighter who also has out of the ring Encounters, or even as a manager with a stable off fighters. In this AAR I focused solely on being a fighter.

You can bring your existing characters from New Beginnings into the game. The Attributes, Professions, Enhancements and more have been ported over into the fight game. I started by rolling Xarzen from one of the three pre-generated Fighter Lists. I had him start life as a Laborer in NHC which gave him the Brawler Attribute. I then rolled for another and got Quick Reflexes. Adding all his Stats and the Attributes gave him a Boxing Skill Level of 63.

I now rolled for the venue he would be fighting and it was in the Space Port district of NHC. It would take place in a private fight club inside a bar or similar business. Rolling doubles meant it was an alien opponent. It was the only fight available this month so Xarzen took it sight unseen. Rolling on the Alien Opponent Table he scored a Razor.

Once you have determined what you will fight you need to determine their skill level. Rolling on the Word on the Street Table came up Bad News. There are three types of fights you can get. Easy Money; where the fighter has a lower Skill Level than yours. Fair Fight; where the fighters are pretty even. The there’s Bad News. This means the fighter has a higher Skill Level. There’s an easy formula to figure it out. After a few dice rolls you get an opponent, tweak his Skill Level to fit then go from there.

In this case the Razor was significantly better so Xarzen had to add something to his current abilities to make it closer. One was Charismatic, allowing him 2 points at the start of each round for scoring the fight, the other was Stims. He had access to Spike, which gives him the Vicious Attribute for the length of the fight. Which is where we left off in our last post.

The easiest thing to compare is the Skill Level. With a 10 point advantage, the odds are set with the Razor as the Even Money favorite and Xarzen comes in at 10 to 1.  Good odds but is it a good bet? Let’s see. 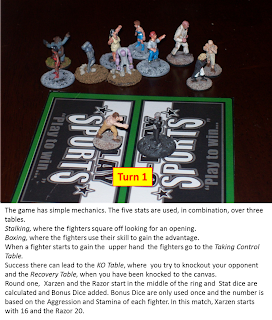 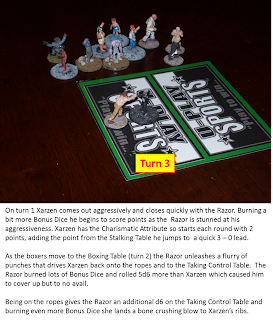 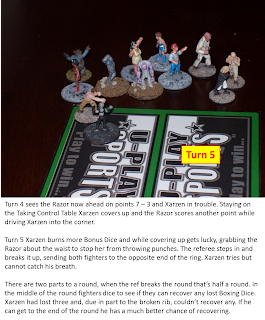 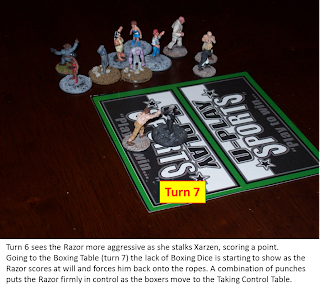 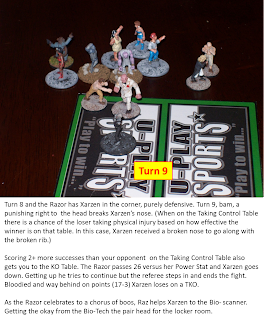