The New In Sight: Part Two - Breaking all the rules?

The play test starts with the adventurers activating first. They move towards the deserted village.
The Cabras now activate and exit the woods.
This triggers the In Sight.
The Cabras now move 2" more.

So far so good. This is how both In Sights work. Now it gets different.
In the old way the adventurers would roll 2d6 for the In Sight and apply the results. But instead each figure rolls 3-5d6 based on Rep and modifiers.
"Whoa! THATS's a LOT of Dice!"
Yes and no. Here's what I did and it worked real well. I had a pile of dice to my left. I had 3-5d6 in my right hand. Starting at one end I rolled the d6, counted successes and placed a d6 from my pile next to the figure with the number of successes facing up. Check it out. Notice that some figures don't get the In Sight test as they do not have LOS. What happens to them? They are allowed to act on their active move. 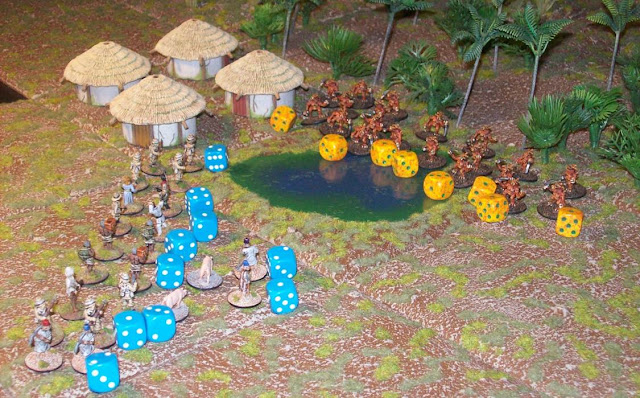 Now it was time to resolve their actions. Starting from the highest and working to the lowest number of successes rolled each figure chose an action.  This meant that sometimes more than one figure would act but that wasn't a problem. There was shooting by Rick and the other adventurers, charges by the Cabras, running away by the bearers, diggers, and pigs. Overall a confused melee with opportunities arising as figures moved.  Here's what it looked like after all the actions were completed and before the melee was fought. 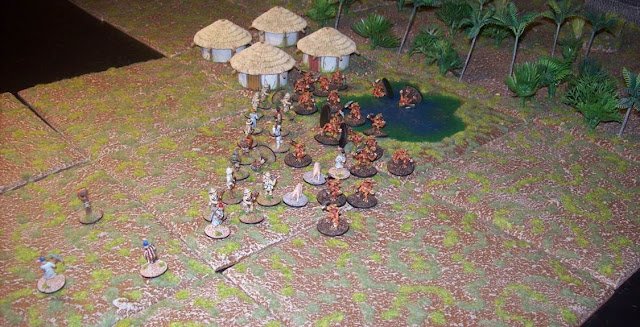 Once the melees were finished it was back to the normal turn sequence. The Cabras and adventurers took the applicable Reaction Tests, Man Down, Received Fire, etc. Once this was finished, as normal, those Cabras that were left were allowed to carry out their active movement. This resulted in some Charge into Melee tests and more shooting, melee and running away. Here's what it looked like after this was over. Notice that once the intial In Sight was taken the game sequence reverts back to normal. Here's the scene at the end of turn one. 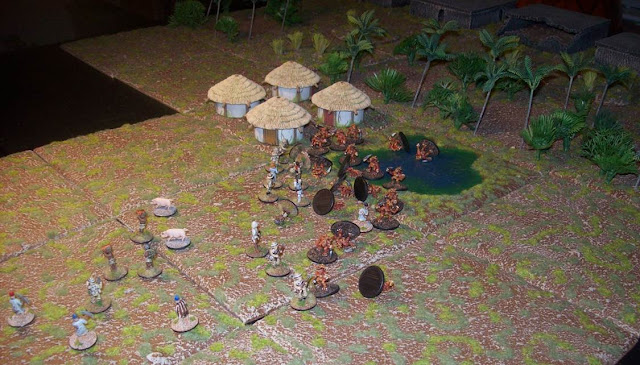 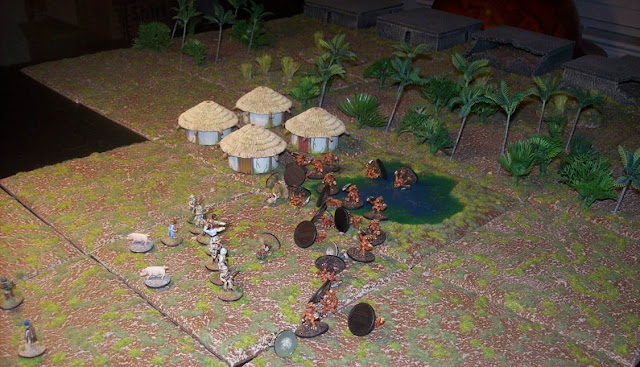 Turn three begins and the Cabras activate first. As everyone is in LOS no In Sight is taken. Here they come! Charge into Melee Tests are taken, dice are placed next to each figure to help determine who can fire or not.  I've found that it is best to roll for all the figures first when taking the Charge into Melee Tests then resolve them one after the other. 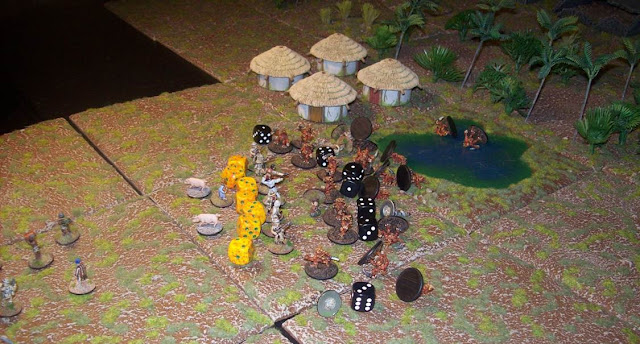 After firing takes place we see the melees shape up. Note that some Cabras never close into melee while some were shot down as they charged. 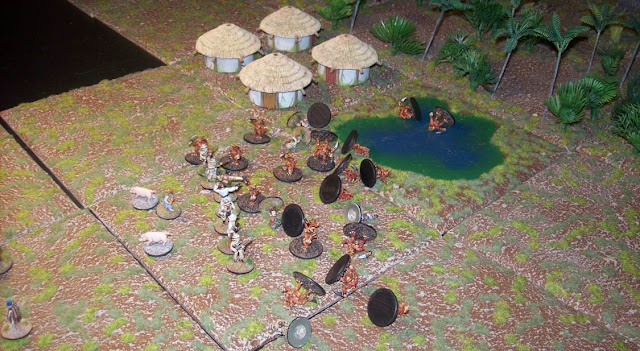 Coming next...The Conclusion
Posted by Ed the THW Guy at 12:44
Email ThisBlogThis!Share to TwitterShare to FacebookShare to Pinterest