The New In Sight: Part One - Breaking all the rules?

Anyone that has 5150: New Beginnings or Long Rifle knows about the new In Sight Test. The new In Sight is an alternative to the current one found in most  THW rules. With that In Sight the tests are taken by the group, usually but not always by the inactive side.
The new In Sight requires both sides, the active and inactive to roll individually by figure based upon Rep. In the new In Sight the active group moves into view triggering the test, all figures in the group can then move 2", and the test is taken.
This is where it differentiates from the original as each figure on both sides starts with 1d6 per point of Rep, modifies it by two or three possible modifiers, and the modified number of d6 are rolled. Each figure tallies the number of successes they roll (scores of 1, 2 or 3) and each figure is allowed to make it's In Sight action in order, from high to low, with the figure with the most successes going first. Those without any successes cannot act.
This works all well and good when each side has 3 to 5 figures. But how about when there's more? That's what I wanted to find out.

The adventurers were in a column while the Cabras were hidden from sight. 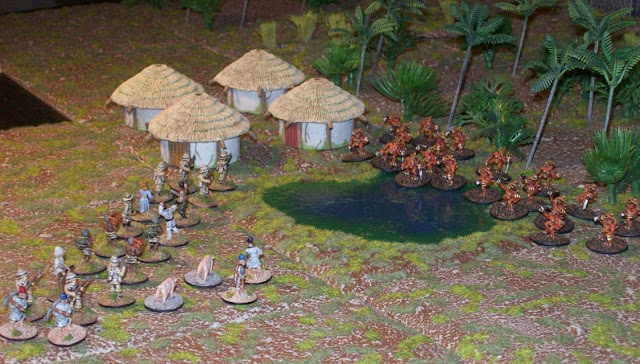 Posted by Ed the THW Guy at 18:48
Email ThisBlogThis!Share to TwitterShare to FacebookShare to Pinterest