The Special Missions are optional and an exception to the Next Mission Table during your campaign. In this Mission the enemy is assaulting a city in full force for a massive slave capture. Several squads are dispatched to different sectors in the city to try to stop capturing Gaea Prime Citizens. You are responsible of one of these sectors. This time retrieving alien technology is not the priority but to save Gaea Prime citizens!

After dividing the map in nine equal sectors as usual, I rolled to deploy PEFs and got one on sector 1 and 2 on sector two. Also, for this special mission there are three Hishen transports (G'raar) centered on the border of sectors 1, 2 and 3. They must exit through sectors 7, 8 and 9 (opposite border) and your Star Army troopers must stop them.
I deployed 1st squad with one less man on sector 7 and 3rd squad on the road on sector 8. finally I rolled for activation to start the game. 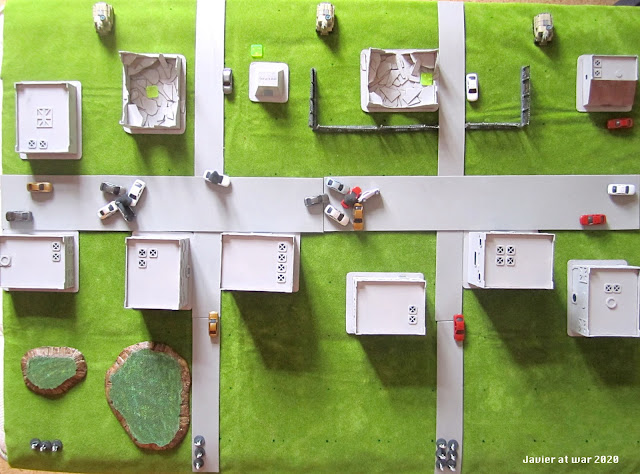 Turn 1. Gaea Prime 6 - Hishen 2.
That was a bad start as Star Army couldn't activate. One PEF was resolved and it turned into nothing. The other two didn't move, but they G'rarr transport did and reached the highway. 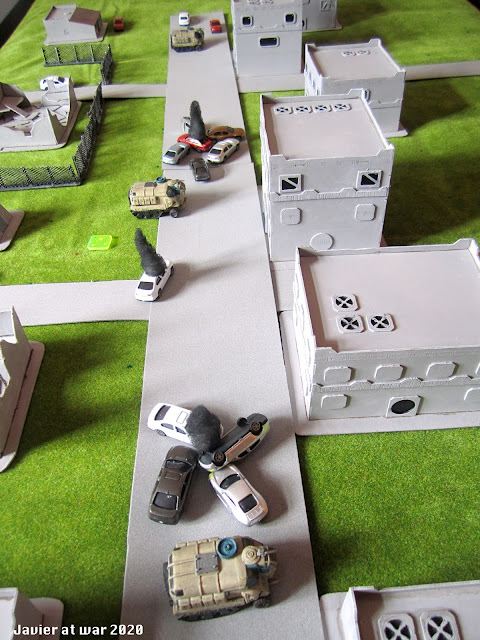 Turn 2. Gaea Prime 1 - Hishen 6.
Hishen received a reinforced squad.
Things started to getting worse with Hishen reinforcements appearing on sector 2, but at least Hishen didn't activate and I could move my troops. 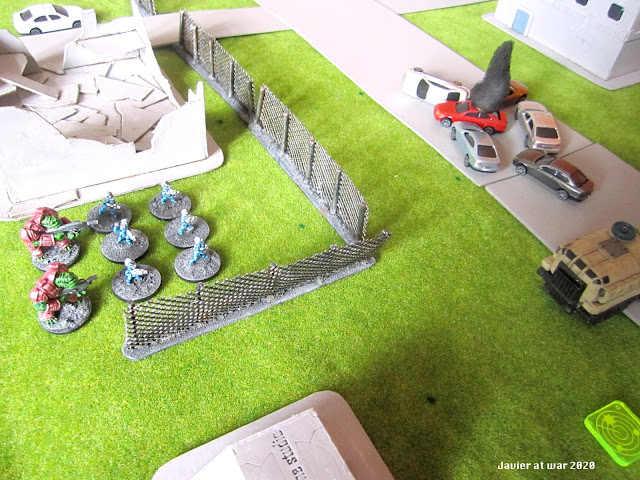 My soldiers fast moved and took positions on the buildings next to the highway. 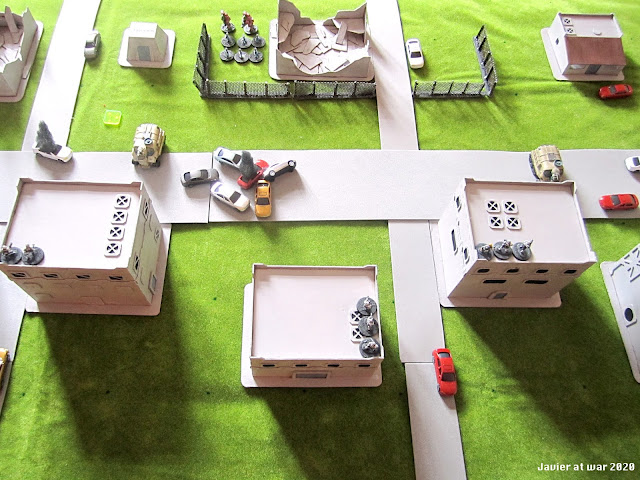 Turn 3. Gaea Prime 6 - Hishen 3.
Again my troops stayed idle but they could react when the Hishen transports rushed through their positions.
The one on the left was shot in crossfire by 3rd squad. One section fired against the vehicle and damaged it, making it to stop. The other section fired against its crew and killed the turret gunner. The rest of the crew bailed out, leaving the prisioners to their fate. One less transport to worry about! 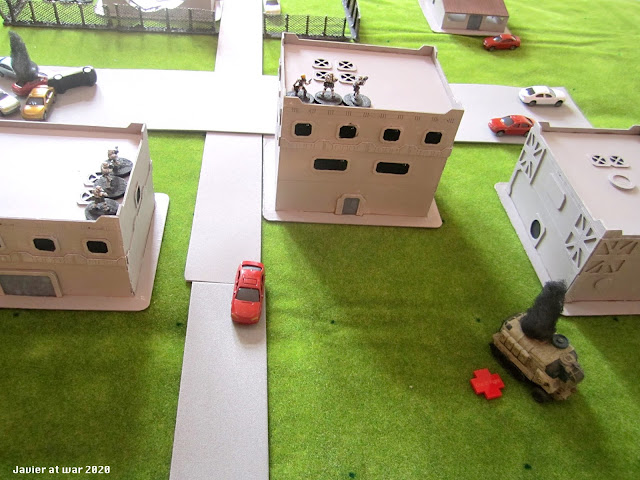 It didn't go so well with the other two G'rarrs. The transport in the middle reacted first and fired at my Star who saved his life thanks to his Star powers but had to duck back due to the suppressing firepower of the machine gun on the turret.
The last transport, the one on the left was hit by 1st squad section and the driver reacted turning away to try to escape from danger. 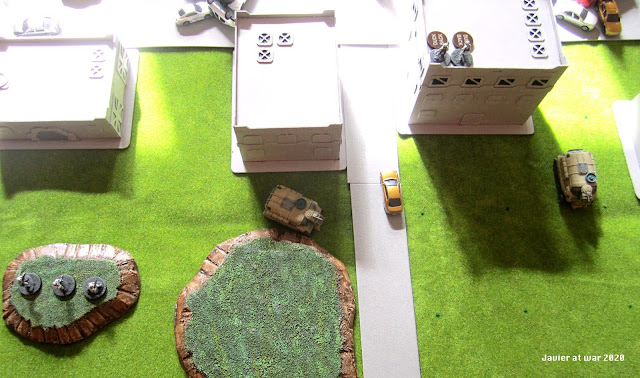 The Hishen reinforcements advanced and took cover in the vehicles pile on the crossroad. 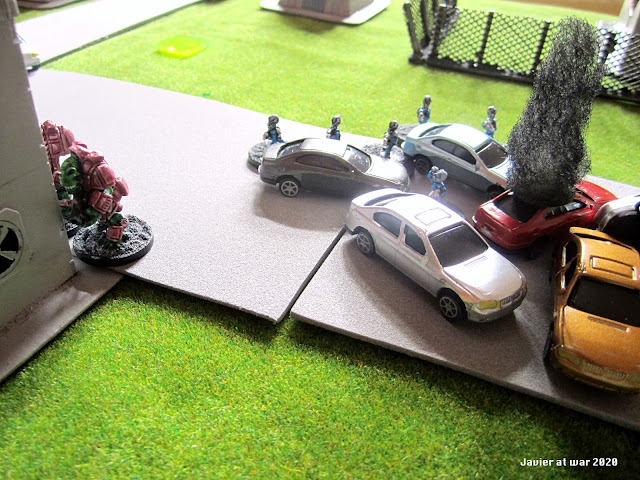 Turn 4. GP 4 - Hishen 4.
Doubles and a squad of Xeog appeared on sector two!
They resolved one PEF that turned into nothing and then the Hishen reacted and fired to stun. 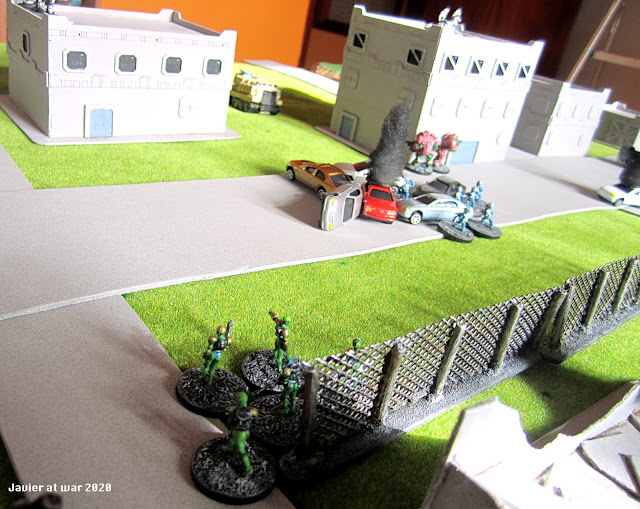 Three Xeog were put to sleep. The leader took one of his women and duck back behind the building. The other standing Xeog returned fire with her laser rifle and killed one Hishen. 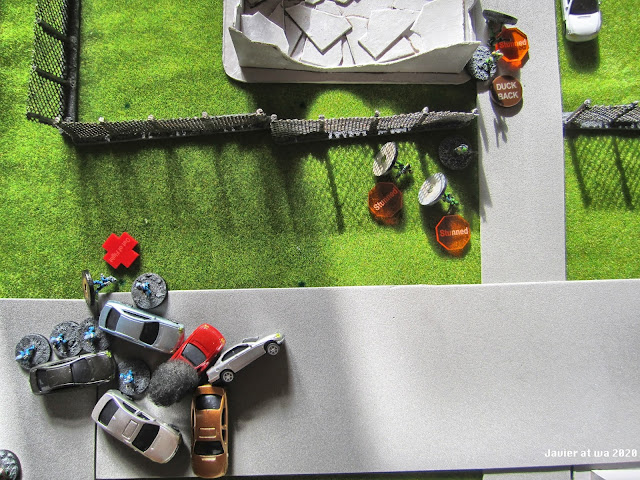 I rolled again for activation of turn 4. GP 5 - Hishen 2.
I received 2nd squad as reinforcement on sector 9 and activated first.
The two G'sharrs reacted and opened fire against the 2nd squad who hit the dirt. 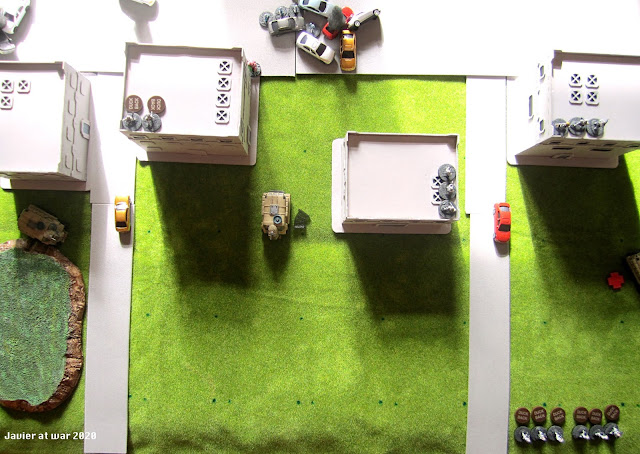 Third squad engaged Hishen on the road and eliminated most of them but suffered one casualty. After that the Hishen squad broke and fled the battlefield. 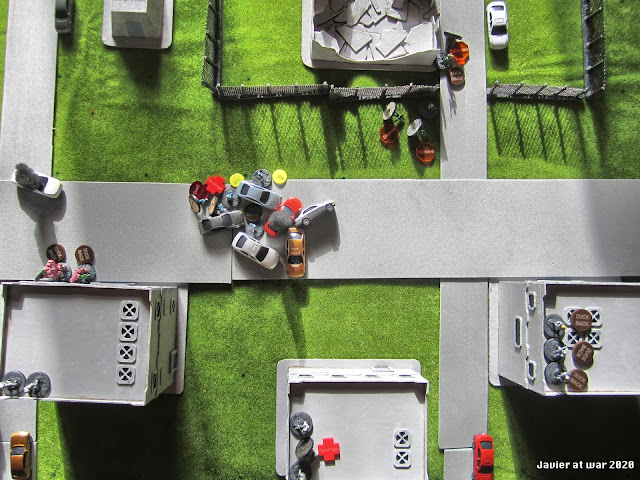 My star fired at the transport in the middle but couldn't damage it and then the vehicle reacted moving away and exited the table! If the last transport also exited the mission would be a failure. 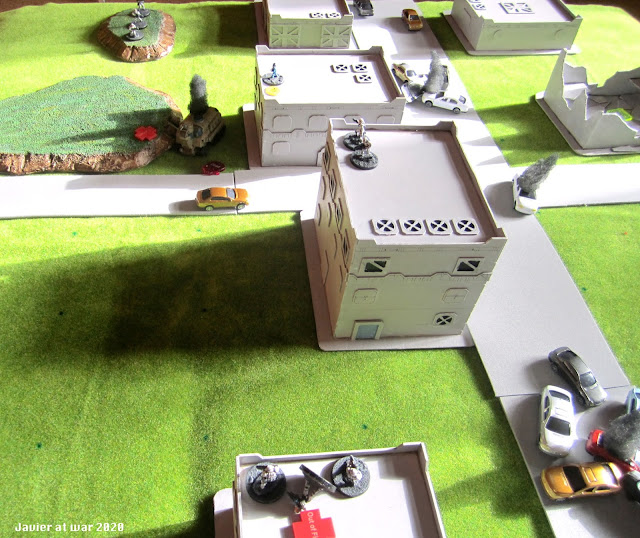 But then the trooper standing next to my Star fired at the last transport killing its driver but the commander took its place and controlled the vehicle. Luckily, the crew couldn't take the beating and bailed out so the prisioners could escape unscathed. Now the mission was a success and I could leave but I wanted to capture those Xeog alive so I kept playing. 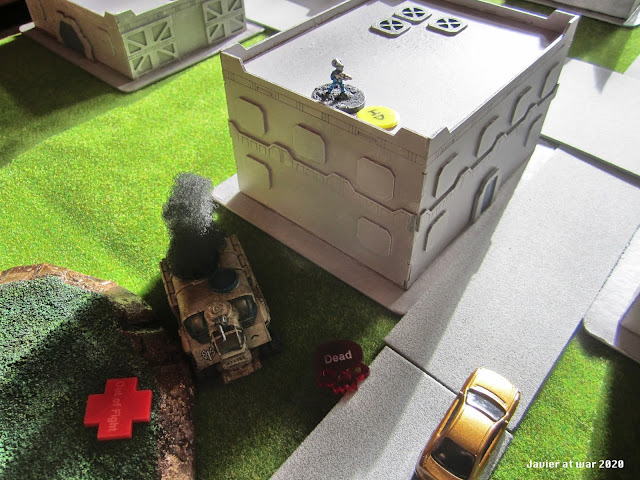 Turn 5. GP 2 - Hishen 4 - Xeog 2.
The last Hishen PEF activated and moved forward. 1st squad section on the hill resolved it, it was a spaceship crew, but couldn't fire in reaction as the Hishen kept moving and got out of sight in the cover of the building.
Xeog on Raid mission and outnumbered turned into Defense mission and they stayed put in their place, firing at anything in their line of sight and taking one man from 2nd squad down with a very long range shot. Now my three squads have five men each. 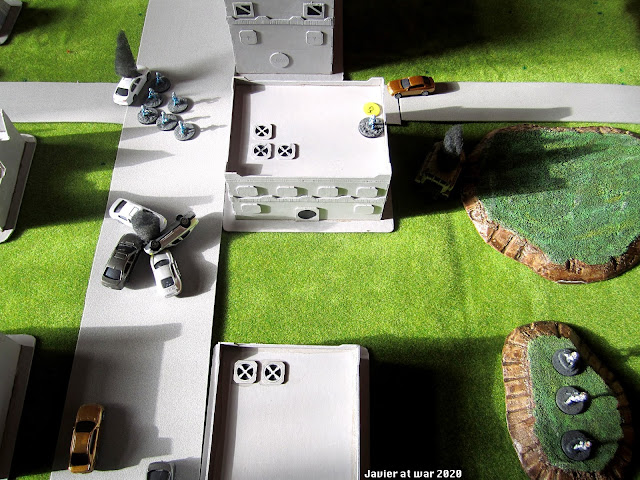 Turn 6. GP 1 - Hishen 3 - Xeog 5.
Hishen took the building in front of them. I re-deployed my troops. Xeog did nothing. A lull in the action. 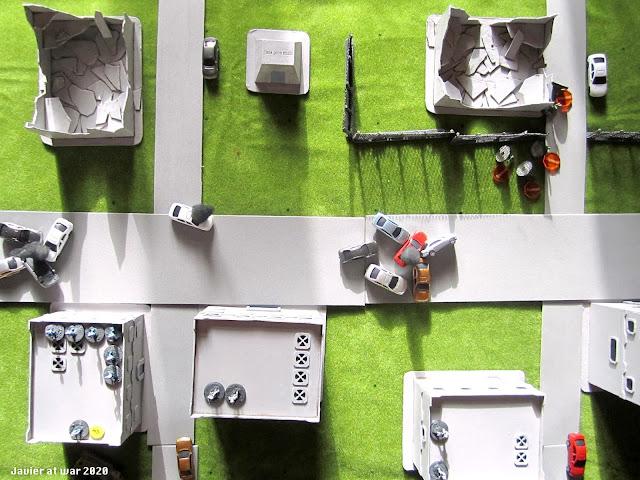 Turn 7. GP 1 - Hishen 3 - Xeog 6.
My 3rd squad in the middle shot down one standing Xeog but the leader managed to escape again and took cover in the ruined building. Out of the picture the 2nd squad is running towards that last Xeog to capture it and revenge their fallen comrade. 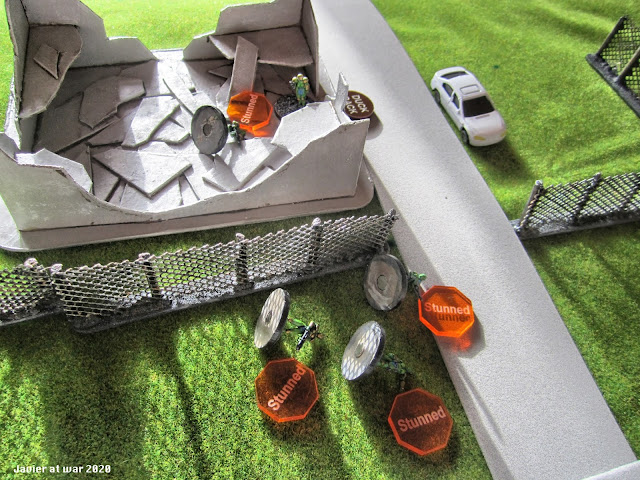 Sargent Blacksmith and one grunt poked out from the building and engaged the last Hishen squad, killing three of them and suppressing the rest... 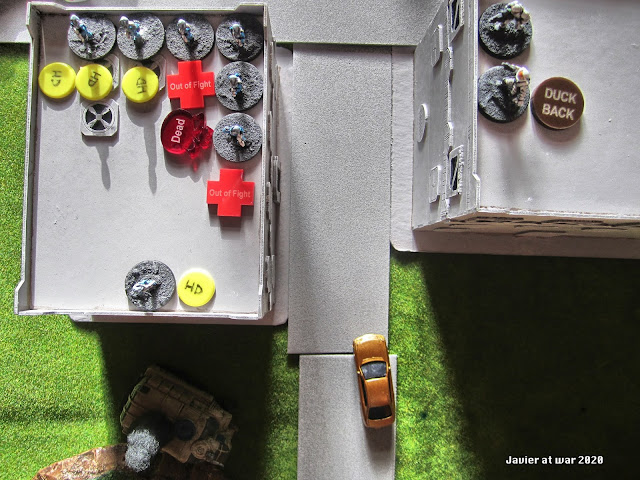 Then the 1st squad section on the hill in sector 1 charged the building and took all the Hishen prisioners! 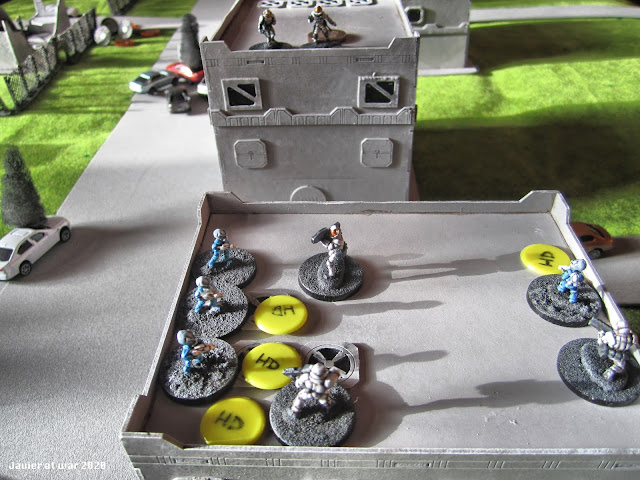 Second squad was getting close to the last Xeog. 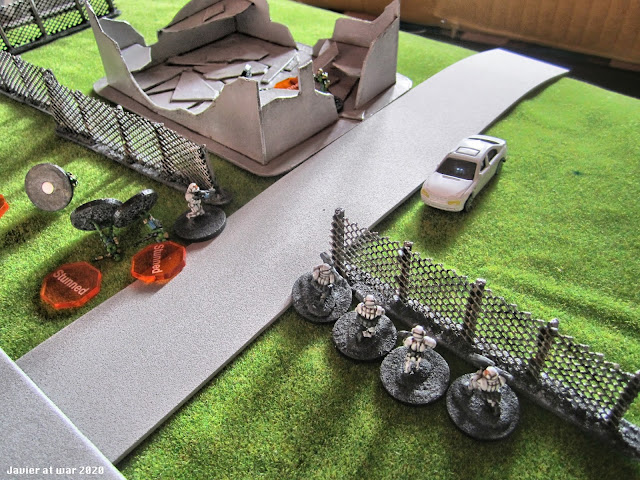 Turn 8. GP 4 - Hishen 5 - Xeog 2.
Second squad assaulted Xeog position with hand grenades and put her out of the fight. Game over. 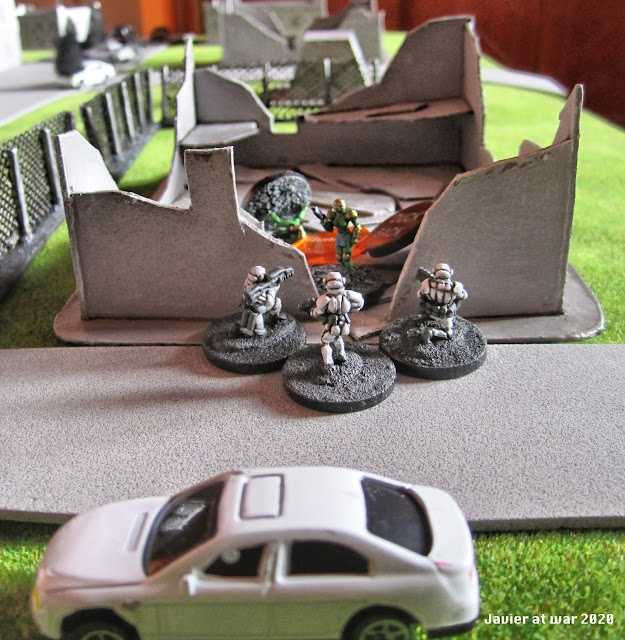 After the mission.
I rolled for my two casualties and both recovered. Then I rolled for Replacements for my first squad and it returned to paper strength. Finally I rolled in the Research & Resources Table, counting +2d6 bonus for retrieving a new alien specie alive and I successfully investigated Inferno explosives.
This was a successful Defense Mission so the next one would be a Raid.
This new mission was very tense with those transports trying to escape. They are harder to stop than you may think and I guess I was lucky avoiding the last one to exit the table. Great fun.
Posted by blacksmith at 02:38
Email ThisBlogThis!Share to TwitterShare to FacebookShare to Pinterest