Having the Hishen Morale Campaign dropped in the last mission I had the opportunity to locate and strike a hidden base on Gaea Prime. This is one of the Special Missions in Gaea Prime - First Defense, Enemy Within.

This time I deployed 1st and 3rd squads on both flanks as sector 7 in the middle did not have direct access to the Hishen Command Center. As the fight was going to be in closed spaces I chose not to equip the specialists with Inferno Grenade Launchers but with SAWs. 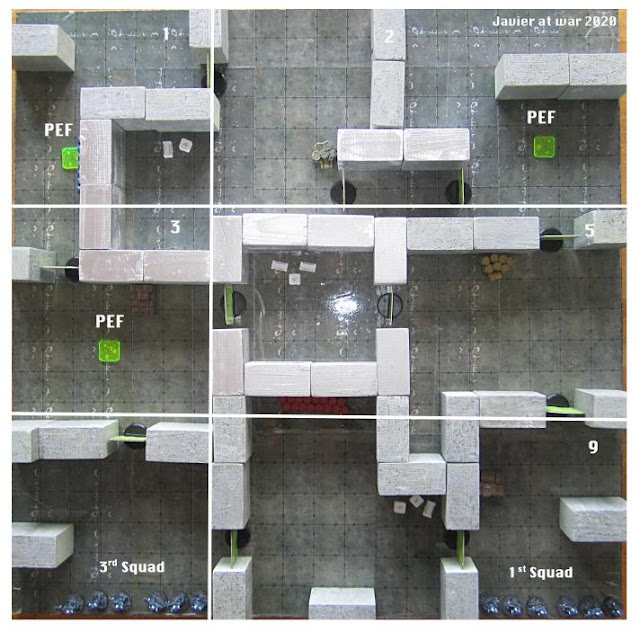 Hishen didn't activate. I fast moved forward my squads on both flanks.

3rd squad on the left resolved first PEF which turned into nothing. 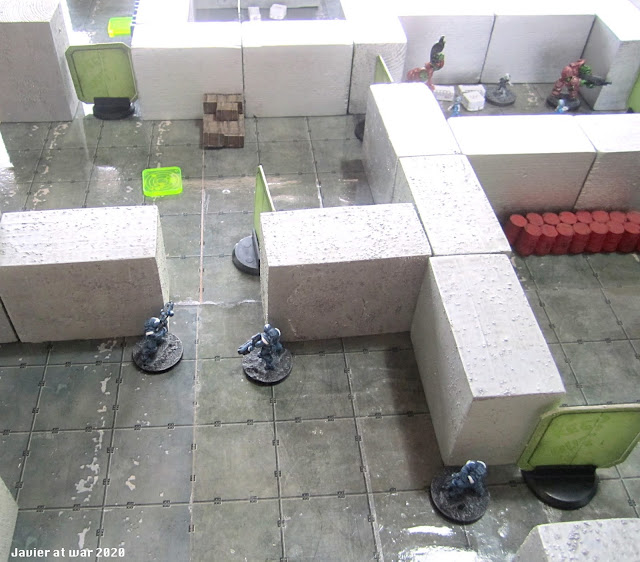 1st squad took positions on both doors. The left one leading to the Command Center and the top right one to a PEF. 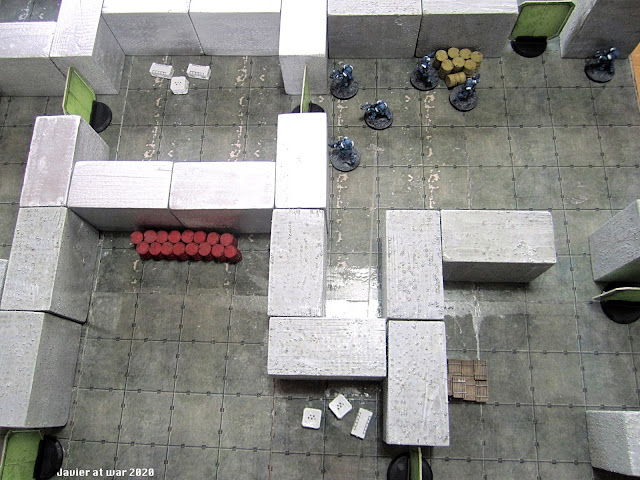 I opened both doors from the Command Center. First the 3rd squad on the left flank. 3rd squad engaged half of the Hishen squad and in the firefight they killed one Grath and a couple of Hishen. The Razor Psy blasted one section and made it to duck back. 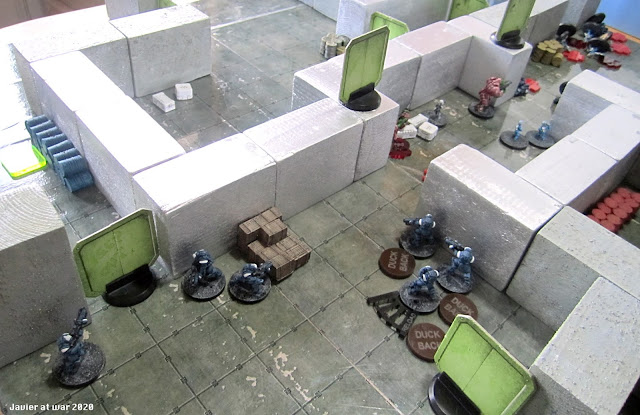 On the right flank the 1st squad had bad luck with Hishen scoring many sixes and later one PEF showing up. They exterminated the PEF who turned to be a crew, but the other half of the Hishen reinforced squad in the Command Center decimated them, only surviving Sgt. Blacksmith and one grunt who ducked back and after that left the battlefield. 1st squad disappeared and now 3rd squad was on its own. 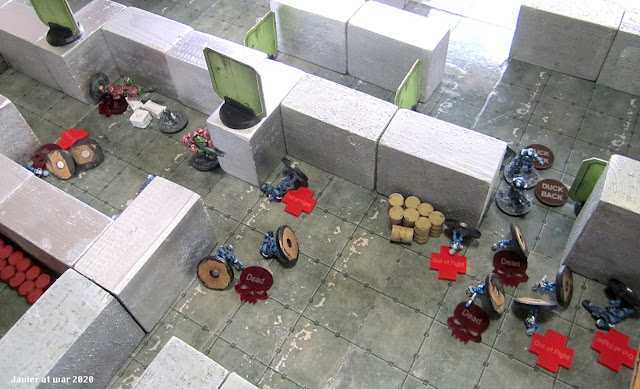 Hishen moved first. The last PEF entered the room and turned into a full squad. Half of it fell down but only Sgt. Gorman and one grunt survived in the end. The corporal crouching behind the boxes stood heroically against a crossfire from the Command Center and the last PEF and he even killed the charging Razor, but he didn't make it. 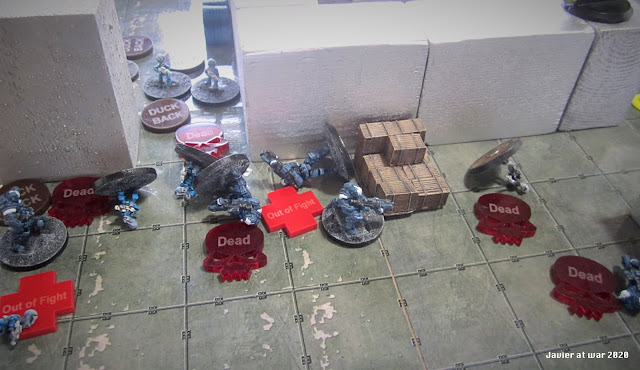 Hishen survivors from the Command Center surrendered to the StarArmy trooper in the base. 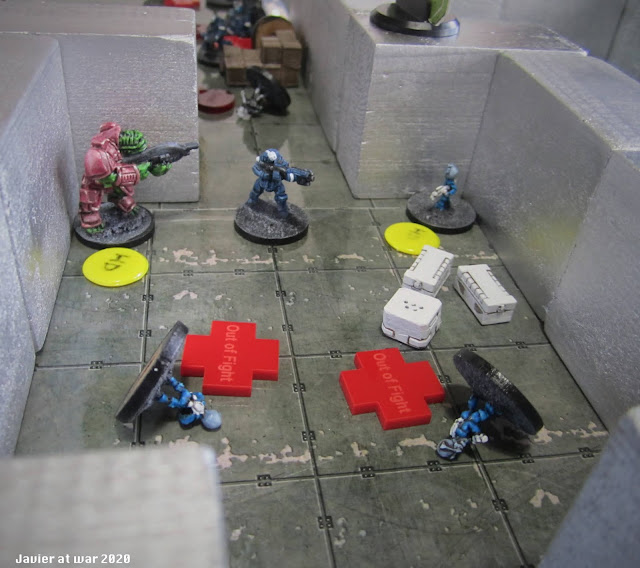 Sgt. Gorman broke into the room and put down two Hishen. The last one fled the battlefield. Mission over. 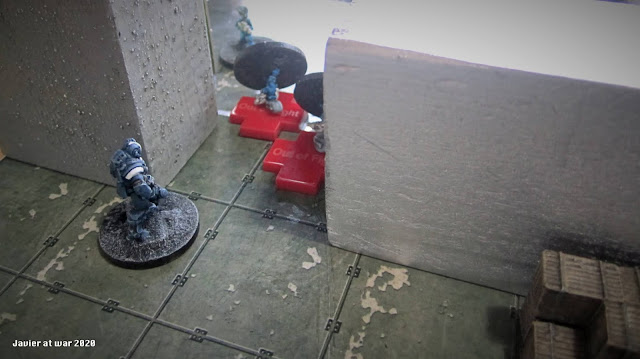 Well, it was a bloody assault and I almost failed it. One wounded soldier from 1st squad didn't recover but the squad received two new grunts as replacements, one Rep 4 and one Rep 3. The squad was now at five members strength.

Three men from 3rd squad were KIA and one wounded, but he never recover. Fortunately the squad received replacement up to paper strength. 3 Rep 4 and 2 Rep 3. Sgt. Gorman raised his Rep to 6.

Hishen Campaign Morale dropped again and now is at level 1; one more drop and the campaign is over with the Hishen kicked out of the planet.

I had two rolls on the Research and Resources Table for winning this Special Mission so I chose and successfully researched Plasma Gun and Battle Tactical Armor (BTA)!