The Hishen Morale Campaign have dropped to 3 and now I was on the counter offensive. This battle is a normal Attack Mission and battle number 9 since the start of the campaign, and I'm under the second stage of the Hishen invasion.

As usual the battlefield is divided into nine equal sections and terrain and PEFs (Possible Enemy Forces) are generated with dice rolls. For this mission I deployed 1st and 2nd squads. 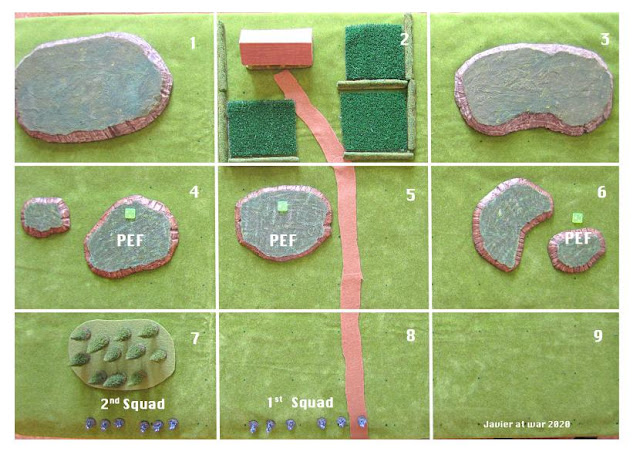 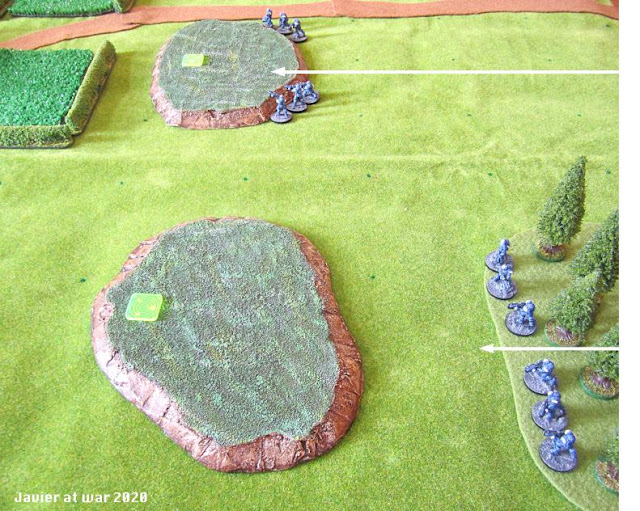 Hishen received some reinforcements on sector 1 in the form of a spaceship crew. PEF on sector 6 fell back and the other two didn't move.

Then I moved the 1st squad who spotted and resolved two PEFs but both were a false alarm. That meant that the last PEF was going to be enemy troops for sure. 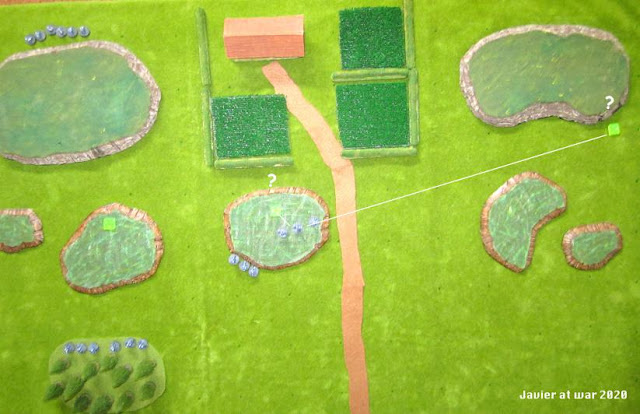 Without hesitation I advanced my 2nd squad and resolved the last PEF. It was a Hishen squad led by a Razor! My squad won the Reaction Test but failed some shots. The Razor "bullet moved", charged and killed one of my troopers in hand-to-hand combat; some Hishen saved their lives by duckig back on time.

The Hishen passed the Will to Fight Test thanks to their Razor leader but the Star Army didn't and most of them resulted suppressed and Hunkered Down. 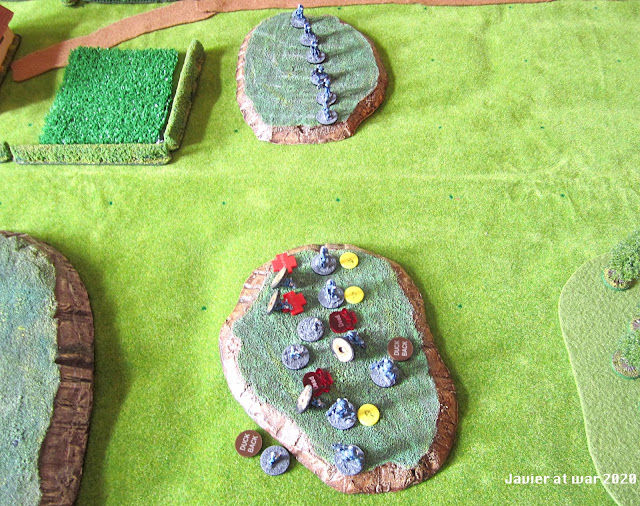 Hishen activated first; bad news. The Razor mind controlled one Gaea Prime soldier who shot to his comrades and then was shot down by them when they returned fire. All surviving members of the squad except Cpl. Hill surrendered to the Aliens! Seeing that, Hill run for the hills (Fled the Battlefield). 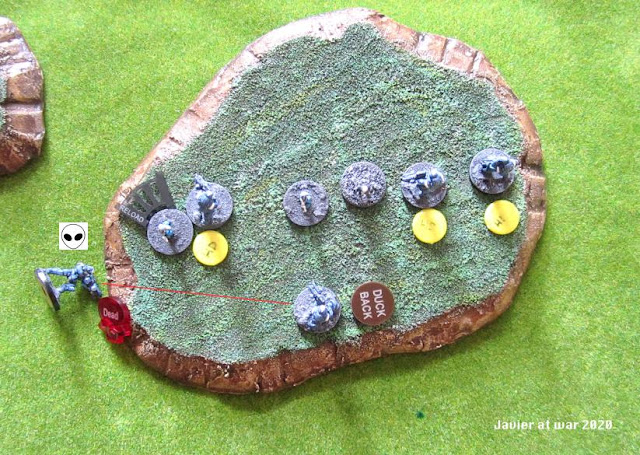 On Gaea Prime's activation the 1st squad took revenge by shooting down the Razor monster. The Hishen squad without their leader fled the battlefield and abandoned their prisoners. 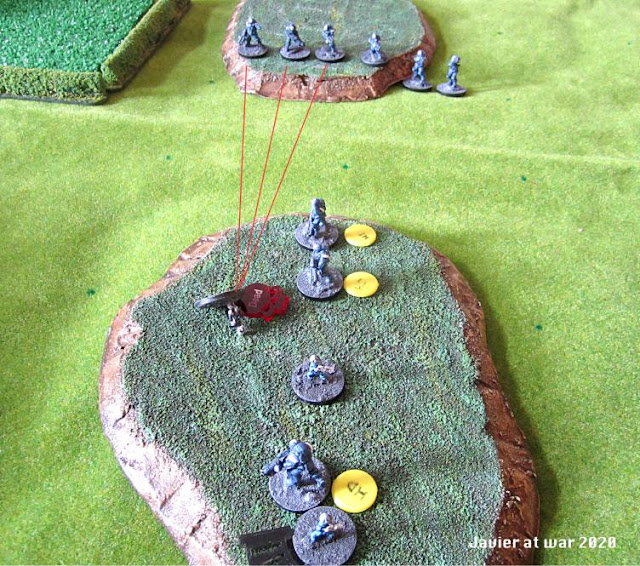 One section of 1st squad went to rally 2nd squad on the left flank while Sgt. Blacksmith (my Star) with the other section rushed forward to assault the last Hishen. 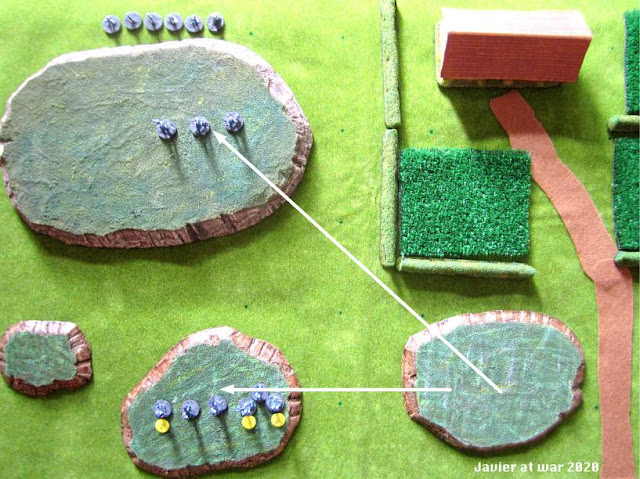 They won the Reaction Test but Hishen crew valiantly returned fire putting one of my men to sleep and making another one to take cover. Then Sgt. Blacksmith threw an Inferno grenade. Game over. 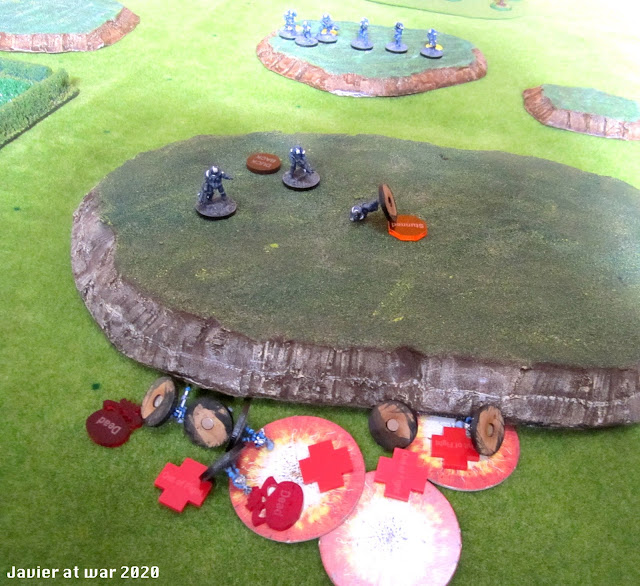 Razors are nasty. Rookies say there is nothing worse than a full squad of Grath, but veterans know there is something worse, a Grath squad led by a Razor!

There weren't any replacements and Cpl. Hill was never to be seen again, but one of the troopers from 2nd squad could recover from his wounds and go back to fight.

ASI finished researching Star Navigation. Soon Gaea Prime will be able to build a star ship and kick out the Hishen from the system.

The Hishen Campaign Morale fell down again to two. Their end was near!

Until then.
Posted by blacksmith at 04:02
Email ThisBlogThis!Share to TwitterShare to FacebookShare to Pinterest
Labels: 5150 Gaea Prime - First Defense