Part 11
Billy and Fast Eddie get the phone call and accompany the Dealer to an out of the way park where the deal should be made. The Smuggler shows up with hired muscle - lots of muscle. Billy's side is outnumbered six to four. 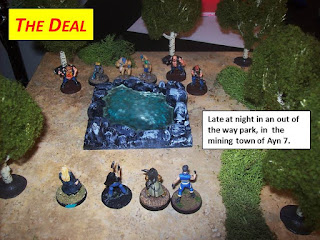 Each leader starts with 1d6 for each point of Rep and a Talk the Talk is taken. After the number of successes is determined, I look at the Deal Table for the results. The result - the Deal goes off normally.
But that's a boring story, so I decide that the Deal went wrong and the Smugglers are actually double crossing the Dealer. This means the figures will go to a Draw! 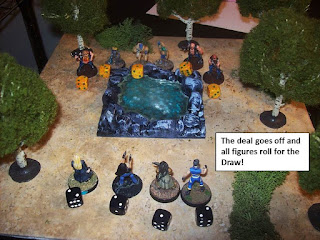 Unlike an In Sight where only the leaders of each group take the test, each figure rolls 1d6 per point of Rep to see the order that they will shoot. Highest successes go first with ties firing simultaneously. 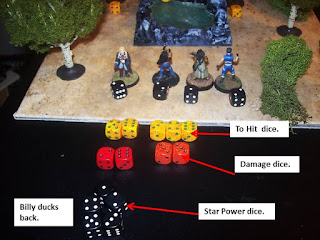 Two of the Mercs fire first and Billy gets hit three times by two Mercs. One Obviously Dead result and 2 Duck Back results. This causes Billy to roll Star Power and he has damage reduced to Duck Back. Billy is turned away from the Mercs, hunkering down in cover. He also gains a -1d6 Decreasing Rep d6 for using Star Power. 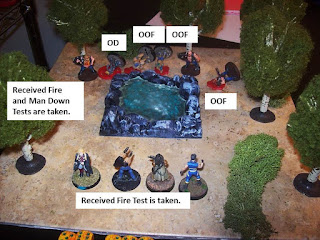 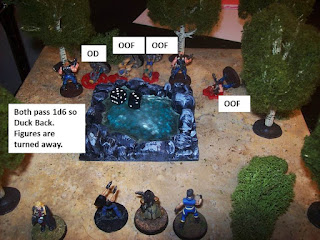 The Mercs left unhurt are forced to Duck Back. 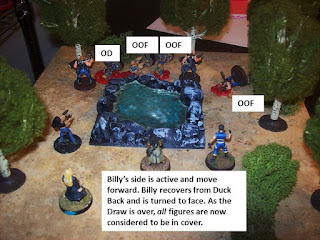 Billy recovers and his side moves forward. 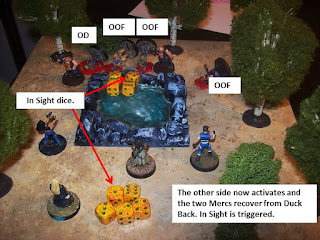 The Mercs activate and recover from Duck Back. Popping into sight the In Sight Test is taken and Billy's side opens up. It ain't pretty. 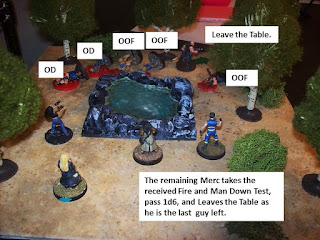 As the Merc lost the In Sight, he can't act. Instead he has to take the Received Fire and Man Down Test. Being alone and passing 1d6, the Merc Leaves the Table.
*******************************
Once the Draw started it didn't go as I thought it would. Billy rolls 6d6 and doesn't go first, then gets hit by 3 shots. That's the difference of the Draw and an In Sight. Figures in a Draw always count as in the open. With an In Sight one side is always in cover, the stationary side.

Anyway, I figure it's time for Billy to head back into space.
Posted by Ed the THW Guy at 15:55
Email ThisBlogThis!Share to TwitterShare to FacebookShare to Pinterest
Labels: 5150 Fringe Space, AARs, Billy Pink, Two Hour RPGs, Two Hour Wargames