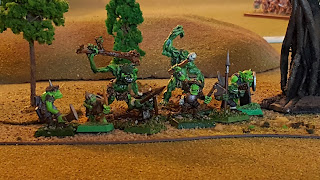 The season was off to a slow start. Only a few raiding parties made for the Green River, just as only a few parties of settlers set out for the frontier.
The goblins that had crossed the river were being held at bay by pursuing detachments of troops. It was a shame that they could not be run down, but at least they weren't roaming the countryside at will.

When a goblin camp moved closer to the fort, the garrison commander attempted a raid of his own. An elite battle composed of knights and woodsmen set out across the bridge and into goblin country.

The trail of the village was easy enough to find. As expected it fell back before the raiders. Trying to catch goblins unaware in their homeland was near impossible.

While there was no sight of the village the same can not be said of the goblins. Signs pointed to a warband ahead and the commander deployed accordingly...

The expeditionary force consists of a detachment of 8 Rep 5 knights and 8 Rep 5 woodsmen, the latter although unarmoured are equipped with bows and hand weapons.

Given that any troops engaged today would need to refit, I elected to only use half of each detachment.

Despite the look of the table, this engagement took place entirely in woods. This limited LOS to 12" at best. Consider the entire table to be tree covered with the exception of the two oval bits of ground without trees on the Kingdom's base line. These are clearings.

The oval area in the center of the table, covered with trees is a patch of particularly heavy wood.

The enemy PEF's were deployed and the humans advanced, woodsmen strung out in a skirmish line with the knights behind ready to charge through the intervals.

With a great rukus of snapping trees and blood curdling yells, a bunch of green skins burst out of the dense wood. Two trolls, three goblins, and three orcs all told.

The archers let fly and those not brought down by the volley were charged.

Only the trolls and a particularly brave or fool hearty orc met the charge.

All three were soon trampled under hoof. 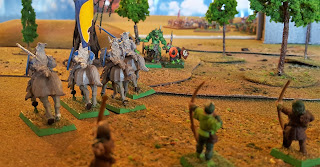 A second group appeared from the thickets. 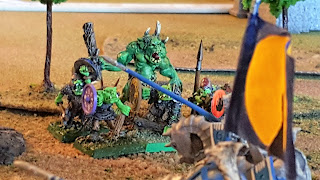 They were beyond the reach of the woodsmen so the knights put spur to their mounts and charged.

Again the foe were ridden down.

And that sufficiently took the fight out of the green skins and ended the proceedings.

An easy victory perhaps but then the troll were decidedly having an off day. Each was a match for a knight and each rolled appalling scores in combat. 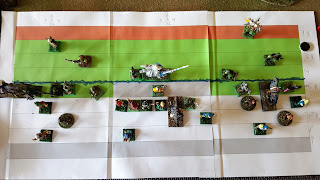 Back on the campaign map, the goblins are being pursued in the west, are absent from the center, and are massing in the east.

This skirmish will give me a slight bump in morale should prove largely inconsequential in the long run.
Posted by M. C. Monkey-Dew at 11:04
Email ThisBlogThis!Share to TwitterShare to FacebookShare to Pinterest
Labels: Swordplay 2015