Cavalry on the Border

In the Kingdom's phase of the same turn that saw the Knights fend off an attack, one of my cavalry units made contact with the goblin raiders they had been tracking last turn.

Eight Rep 4, mounted men-at-arms, armed with lances, entered a clearing only to find two Possible Enemy Forces not one foot away. 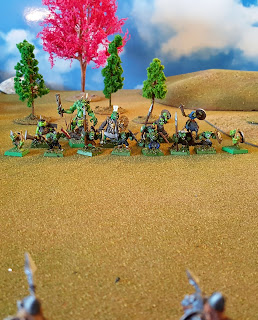 The two forces resolved into some 15 greenskins including a massive orc leader and a troll. 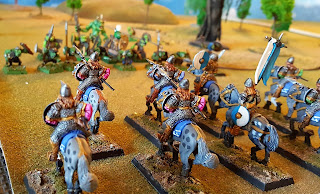 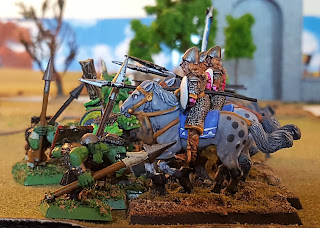 There was a dreadful din as the two forces met.


Although outnumbered my lads won all of their combats save one, that against the troll.

The disparity in losses was apparently too much for the Gobbos and they fled. 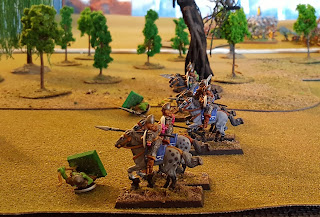 Only to be mercilessly ridden down.

One of the lads held back to pick up the banner of our fallen comrade. 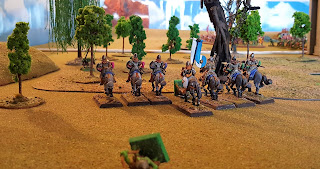 A quick regrouping and it was off to seek out the final Possible Enemy Force, that had been making a racket in a thick cluster of woods. 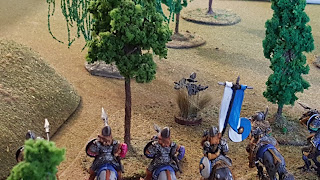 And so the end of another successful fight.

Mind you the Gobbos can't roll well to (literally) save their lives today.

Two games in the space of a few hours with breaks to take photos and edit them. Swordplay 2015 is certainly fast playing. Makes it ideal to resolve actions in a campaign game.

On the downside in the following goblin strategic turn, my lads lost track of one band who went on to burn out a settlement. My two victories just make up the morale loss for the attack.
Posted by M. C. Monkey-Dew at 08:07
Email ThisBlogThis!Share to TwitterShare to FacebookShare to Pinterest
Labels: Swordplay 2015