In RSBM all matches are to the death. There’s a points system (gasp) that allows you to create and rate your gladiators.
There’s a Fame system to allow your gladiator to get better as he wins matches.
But the rub is, you can’t get better if you fight inferior opponents so when you fight an opponent of a lower rate you don’t gain Fame. Fortune, cashola, yes. Fame no, and that’s how your fighter gets better.
So what’s a gladiator to do when the Locale you’re fighting in gives you lower rated opponents? You make lemonade! Basically you fight more than one gladiator until their combine rate exceeds yours or you cast off your armor, choose a different weapon, etc. to drop your rating. For example, drop your armor from plate to skin and you drop 3 rating points. But we’ll go into that later. Right now let’s go with a step-by-step demo of one gladiator fighting two with a combine higher rate.
Here's a map of a portion of Talomir for reference. Note that RSBM ties directly into WHAA and RRtK. RSBM can even be substituted for combat in WHAA if wanting more detail. 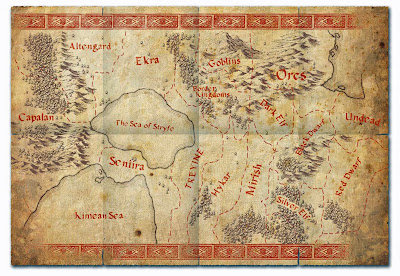 Posted by Ed the THW Guy at 09:44
Email ThisBlogThis!Share to TwitterShare to FacebookShare to Pinterest
Labels: Rally Round the King, Red Sand Blue Sky, RedSandBlackMoon, Warrior Heroes Armies and Adventures