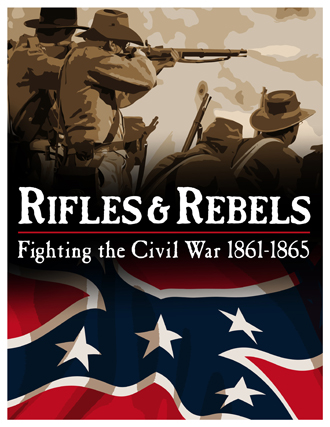 It's July 1863 and the Army of the Potomac is holding on. Yesterday the Johnnies hit hard and the line held. Today you are the leftmost flank of the army and must not give an inch of ground.
Though dulled by the morning mist, the shrill sound of a Rebel Yell is unmistakable. The Johnnies are on the move again.

Will you hold?
Rifles & Rebels is a unit based game where units are composed of 5 to 10 figures. In Rifles & Rebels you can choose from two sides and two arms with a total of four forces. You can be:

• Union Infantry
• Confederate Infantry
• Union Cavalry
• Confederate Cavalry
Whichever you choose you must lead one or more units of men through the war, the American Civil War, fighting when needed because it's all about victory and glory, and in some cases, just survival!
The cannon are booming, the troops mustering, and the fight is coming to you. Welcome to …


RIFLES & REBELS
Rifles & Rebels uses a floating scale which allows you to count each unit as a platoon, company, or battalion. This allows you to fight large battles as well as smaller actions.
Rifles & Rebels and Muskets & Mohawks share similar mechanics with changes made to reflect the different periods.

Posted by Ed the THW Guy at 19:51
Email ThisBlogThis!Share to TwitterShare to FacebookShare to Pinterest
Labels: Muskets and Mohawks, Rifles and Rebels