5150: New Beginnings is the new, soon to be released, sci-fi immersion game from Two Hour Wargames. As the game deals with each player having a small number of figures or characters comprising their group, and getting into more detail, this allows THW to return to its roots. Individual Reaction Tests for individual figures.

In the original In Sight Reaction Test found in Six Gun Sound and Chain Reaction, AKA Guns and Girls, each figure, whether active or inactive, would take the In Sight Test. As players wanted a way to play bigger games with more figures the system would break down. To remedy this we made two changes.
1 - All of the Reaction Tests would be taken by the group with one set of d6 being rolled and applied to each individual in the group taking the test.
2 - Only the inactive player would take the In Sight Test.
While this did and still does work well for games where a large number of figures and many groups are used, it took away the grittier personal feel of the original Chain Reaction game. As 5150: Star Army handles military games and large groups the companion book, 5150: New Beginnings, by its focus on more detailed smaller groups required a more personal touch.
So, we've returned to but tweaked the old ways.

1 - All Reaction Tests, except the Cohesion Test borrowed from 5150: Star Army, are taken individually.
2 - The In Sight Test is taken by all figures that qualify for the test, i.e. have a Line of Sight to an enemy.

For this to work we had to trim the number of dice rolls that would be needed. This was done by a new Ranged Combat Damage Table where damage is reduced to one 2d6 roll based on weapon Impact. While it may look different it stays true to the math used in the current THW damage tables. This is important. It's still the same result just a different way to get there!
And the other way is the new procedure for In Sight and sequence of firing.
To make this easier to understand we've decided to release this detailed but simple example of how it works. So let's get started! 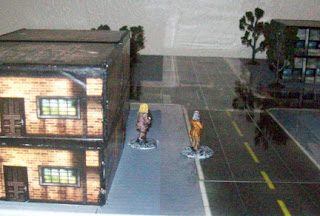 The two Gangers are on the street. 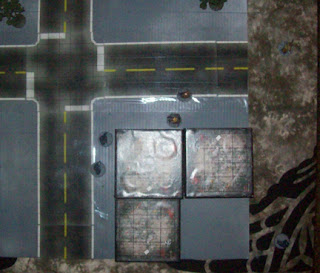 The same situation as seen from above. The two SWAT members are on the other side of the building. Neither side can see each other. 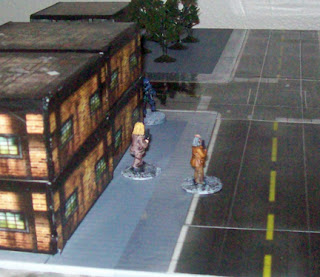 SWAT activates and one team member steps into view. This immediately triggers an In Sight Test for both sides. In this picture we see the SWAT member come into sight. 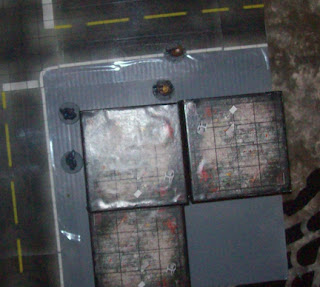 Here's the situation from above. Note that the second SWAT member is still out of sight. 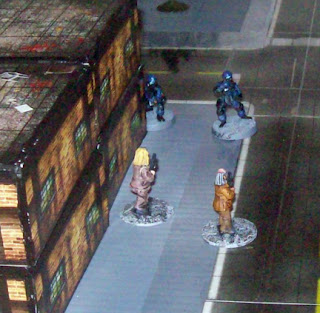 Before the In Sight Test is taken the group triggering the test is allowed to move all of their figures up to 2" if desired. The first SWAT member moves further into the open and the second now moves up to the wall, will count cover, and can see and be seen, 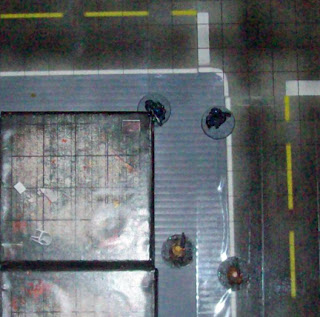 Here's the situation from above with all figures now having LOS to targets. They all will now take the In Sight Test.
Now that all the figures in the triggering group that wanted to have moved up to 2" the In Sight Test is taken by all figures that have LOS to an enemy. Note that if desired the SWAT team member could have moved back out of sight! However in this case all four figures will take the test.
The first step in the new In Sight is all shooters declare their targets. Easy rule is that shooters will target the closest figure and a figure cannot be targeted by more than one shooter until all figures have been targeted.
Stars may choose their targets.
Each figure then starts with 1d6 per point of Rep that it has. This means:
·         SWAT Team members will start with 5d6.
·         Gangers will start with 4d6.
Modifiers to the In Sight Test are simple and easy to remember.
·         If the tester is active it subtracts 1d6.
·         If the target is in cover or concealment the tester subtracts 1d6. Note that in some situations, as in our example, some targets may be in cover and some may not. When this occurs one d6 of a different color is designated to count against the target not in cover.
In 5150: New Beginnings there are a few more modifiers due to Physical, Chemical and Blended Enhancements as well as Aliens but normally only these two apply.
Back to our example:
·         The SWAT members have targeted the Gangers closest to them and both roll 4d6.
·         The Gangers target the figure closest to them so the Ganger shooting at the SWAT member in the open rolls 4d6 while the one targeting the figure in cover rolls 3d6.
·         All count the number of successes scored, a result of 1, 2 or 3, and lay one d6 with the appropriate number of successes face up. 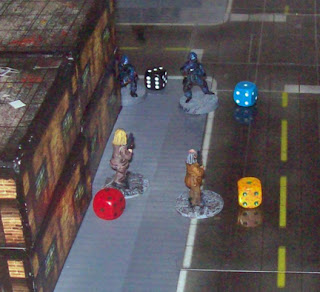 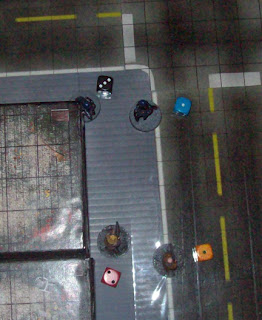 Here's the situation from above. Note that the d6 reflect the order of fire from highest to lowest with ties firing at the same time! No successes means no dice which mean no firing this round. 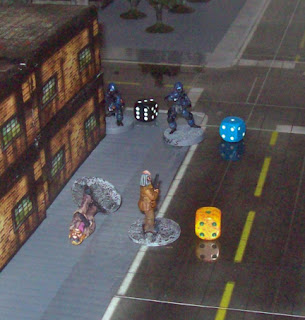 Black SWAT fires first and scores a hit on Red Ganger. Red Ganger is knocked down, his d6 picked up as he now cannot fire. Note that damage is NOT rolled for nor is a Received Fire Test taken! 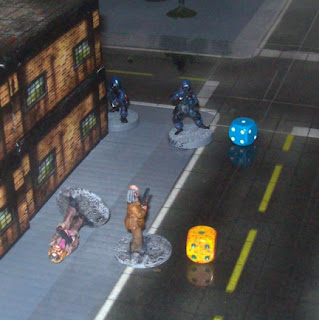 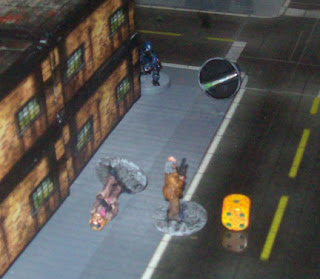 Blue SWAT is knocked down. His d6 is removed. If he hadn’t fired he would not be able to fire. Note that damage is NOT rolled for nor is a Received Fire Test taken! 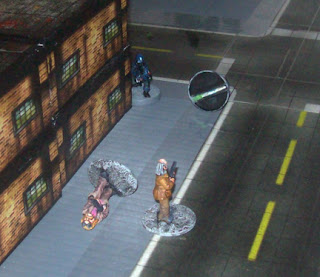 Yellow Ganger has his d6 removed. 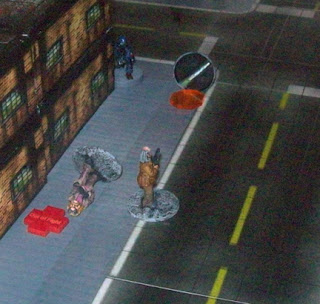 As all firing from the first round of In Sight has been resolved damage is now rolled. Red Ganger is out of the fight and blue SWAT is stunned.
After all fire has been resolved and damage allocated each figure takes their reaction tests. In this case both figures have to take the Man Down and Received Fire Tests. Each figure rolls one set of dice and they are applied to every test that must be taken. When more than one test is taken the worse result is counted. So for example if one test had a carry On result and the other a Duck back result the figure would Duck Back.
Note that Fire and Return Fire on the old Received Fire Test has been replaced with Carry On. Each figure scored a result of Carry On. If desired the active SWAT member could duck back as he still has active movement left. But as he does not choose to do so this means that all qualifying figures roll another round of In Sight. Note that subsequent In Sight Tests will keep the modifiers from the first test. 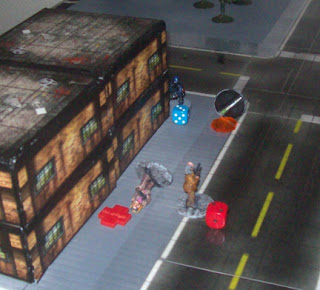 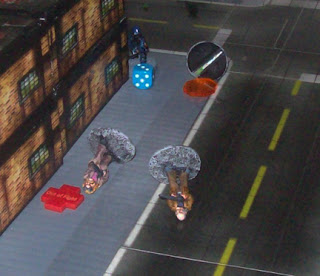 Blue SWAT fires first and score a hit. Red Ganger is knocked down and his d6 removed. He cannot fire. 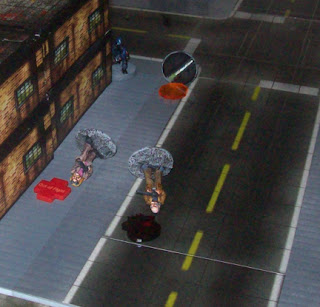 Blue SWAT has his d6 removed and damage is rolled. Red Ganger is obviously dead.
Bottom line, net-net, using this procedure results in less dice rolling and plays much faster once you get the hang of it.
Posted by Ed the THW Guy at 13:28
Email ThisBlogThis!Share to TwitterShare to FacebookShare to Pinterest
Labels: 5150 New Beginnings, Two Hour RPGs, Two Hour Wargames