This post is also available on M C Monkey-Dew's Games blog
This is a solo game played using the current incarnation of 5150: New Beginnings, soon to be released by Two Hour Wargames. I've set this game in the Space Rangers universe and in this game I will be taking the role of the Judges of the Titan Rangers. The system will handle the baddies and anyone else who might happen by.

Southside Johnny is the leader of a street gang; The Asbury Nukes. The Nukes have declared their neighborhood a no go zone for Judges.You have to give them credit for moxie that's for sure. Mind you their neighborhood is one of the most run down and crime ridden in the city.

Needless to say, such a claim cannot go undisputed and four Judges are moving in for an early morning raid on the gang's hangout and HQ, The Plasteel Pony.
The Rangers strike force deployed in two groups. Judges Baen and Esqueza would enter the table from the right, throw a couple of flash bangs through the front window and then enter the building from the front. Judges Stone and Phillipi would enter from the left, break in through the rear side door, throwing flash bangs as they did so. That was the plan anyway.

Gang member "Lucky" Starr was on duty as lookout atop the building. Fortunately he was not very alert and the Judges initial approach was undetected.

Unfortunately Lucky made the Judges before they reached their jump off points and screamed the alarm. 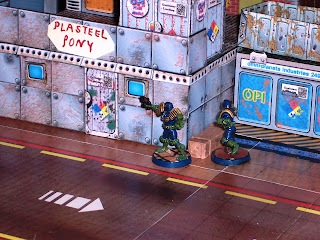 Judge Baen bellowed a demand for surrender as the Judges drew their weapons. 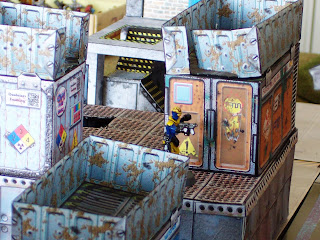 In response, Lucky promptly leaped off his perch and made a run for it.

Lucky lived up to his name as his flight was in a direction my approach had left uncovered. 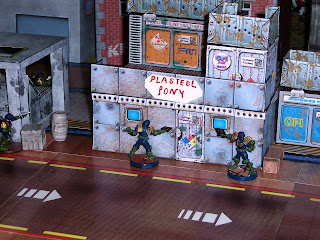 Meanwhile the Judges moved into position to implement my cunning plan...

Only to find that the Nukes had been tipped off and we had fallen into their even more cunning trap! 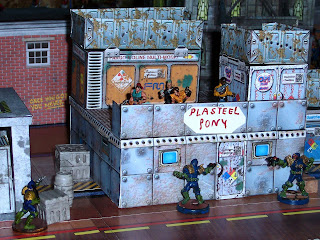 Johnny, Jerry, Alice, and Brainz all popped up from behind the parapet on the roof guns blazing...well except for Brainz as he doesn't pack heat. 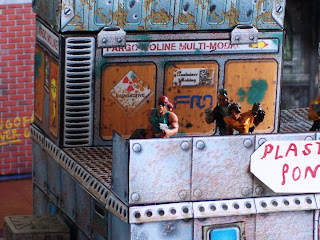 The In Sight test showed that Johnny would fire first, then Judges Baen and Stone, followed by Jerry and Alice, with Judge Esqueza firing last. Judge Phillipi was not involved in this action as he was out of sight covering the rear side door. 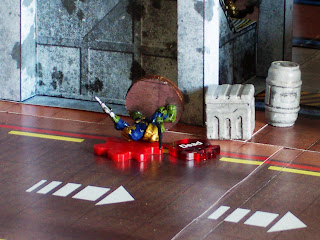 Southside Johhny shot Judge Stone in the head, killing him instantly while Judge Baen did the same to Jerry Mander. 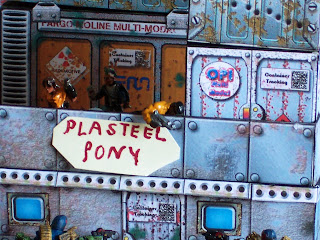 Esqueza and Alice both fired but scored no hits.

In the following reaction tests, Alice ducked back behind the parapet while Brainz fled the scene following Lucky's path.


This left Judges Baen and Esqueza facing off against Southside for another round of In Sight tests. 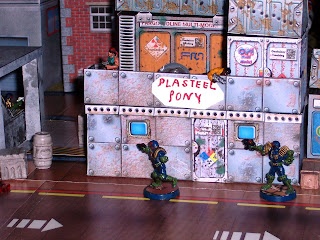 Judge Baen hit Southside in the gun arm. The resulting pain was too much for that hard character and he dropped out of the fight clutching his arm. Judge Baen sent Esqueza to check on Stone. 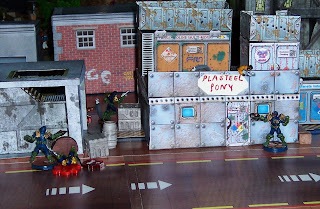 Baen also radioed Phillipi to coordinate with him in preparation for entering the Plasteel Pony. 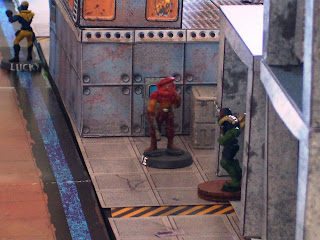 At that moment Red burst out of the side door gun drawn, right in front of Judge Phillipi. In the exchange of fire that ensued, Red was killed by a shot to the chest. 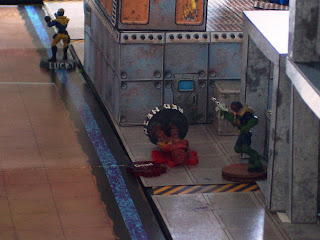 The Judges burst into the building. 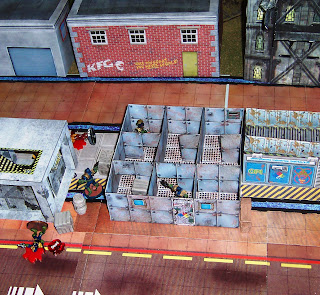 Up on the roof, Alice considered her options... 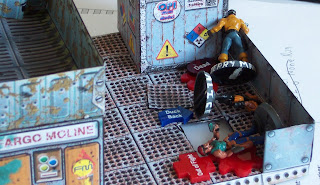 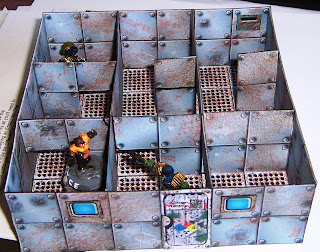 She quickly made her way back down into the building... 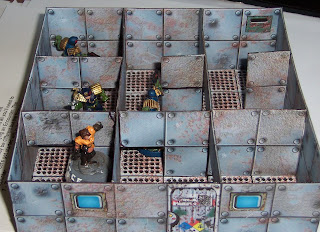 ...while the Judges conducted a room by room search of the premises. 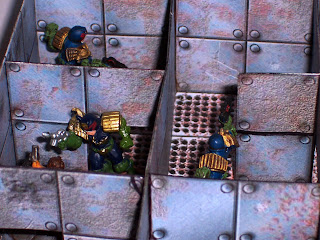 Suddenly Alice and Judge Phillipi were face to face and muzzle to muzzle. Alice was quicker and aimed true. Her bullet hit Phillipi square in the chest. 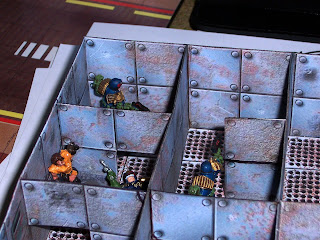 Phillipi's life was saved by his armor but never the less he was out of action for the rest of the game.
Making her way towards the side door, Alice next ran into Judge Esqueza. 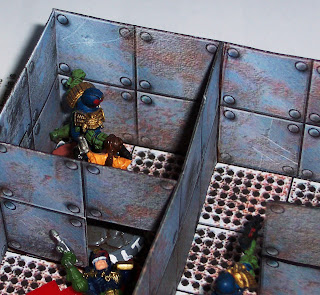 This time it was the Judge who got the upper hand. Alice was hit in the leg and blacked out briefly. When she recovered she found herself cuffed with the Judges working to staunch the blood flowing from her wound.
Lucky and Brainz are still at large. However with the deaths of Mander and Heine, and with Southside and Alice safely in custody the gang has been shattered.
The city mourns the loss of Judge Stone. He will be avenged.
*************************
Another fun one. Had a brown trousers moment when things went pear shaped and we were ambushed.  Judge Baen's coolness and leadership proved decisive.  Ed tells me the  rules are just about set in stone and the game played very smoothly. As this game shows the game need not be limited to the Gaea Prime background. With a little imagination it can be used in any sci fi/near future setting.
Posted by M. C. Monkey-Dew at 15:19
Email ThisBlogThis!Share to TwitterShare to FacebookShare to Pinterest
Labels: 5150 New Beginnings