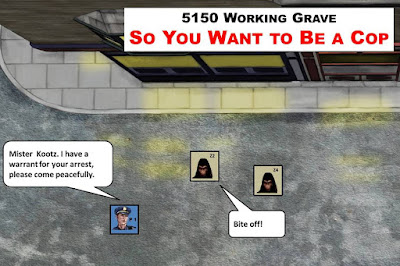 Officer Jones has his 1st Encounter. He has to arrest someone. Here’s how we do it:
·       I roll 1d6 to see where the arrest will occur. City Hall Area or the Financial District. It’s City Hall.
·        Seeing how this is the Grave Shift, the people and things Jones will run into are way different than the middle of the day. I roll and find out it’s a Zhuh-Zhuh Shaker. Zhuh-Zhuhs AKA Monkey Boys are big fellows with a bad temper. Shakers are high up the ladder socially so wonder what this will be about. I roll again and find out he’s a Corporate Exec.
·       I roll to see how many of them there are and get 2.
·       I see that the Leader is a Rep 4 People 4 Savvy 2 and his friend is a Rep 4 People 3 Savvy 3. Not sure if any of them are carrying weapons, won’t find that out until things go wrong – if they do.

I decided to play this out with the counters and Battle Board included in the game but I could have used minis if I had them.

Anyway, back to the arrest and that starts with the Intimidation Table.

Time to get physical!

Rolling on the Action Table, Jones passes 2d6 and so does the Zhuh-Zhuh Leader but they have the Advantage so they go first and charge Jones before he can draw his weapon.
End of first round Jones uses Star Power and still suffers a -1 to Rep. So does 1 Monkey Boy. 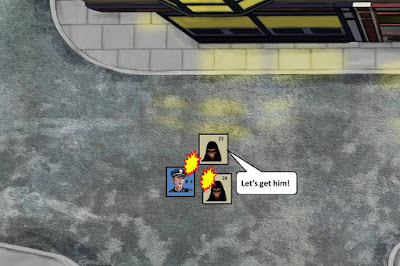 Second round of melee and Jones passes 2d6, Monkey Boys only 1d6! Down they go, out of the fight! Jones cuffs both of them and puts them in the back of the patrol car. Off to jail. 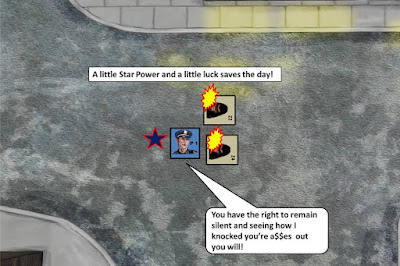 So what did Jones earn for this first Encounter? Let’s start with Street Cred. Jones is a rookie so he’s not Bent or Straight Arrow yet and since he was successful (read the Monkey Boys the Riot Act after they were unconscious) he ended up gaining a +1 to his Street Cred.

He gained 2 Increasing Rep d6 for taking out the two Zhuh-Zhuhs  (captured), but 3 Decreasing Rep d6 for using Star Power for a net of 1 Decreasing Rep d6. Not a good start to his career but at least he has one Voluntary Encounter coming up. Think he needs to do some Chillin' at Dekkar's Place - get a drink maybe some friendship and even do a little gambling

One thing I did learn is that with the Logical Attribute Jones will Interact and Intimidate People at a -1d6 disadvantage.  Might have to try a little Sweet Talking in the future.