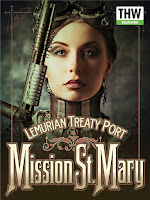 So Arizona Bob and the group are on the Brittany Star heading for Mission St. Mary. Normally the games would start when they disembark, but I figure, what the heck, I’ll run an Encounter on the ship. The rules for Encounters that could be used are in Mission St. Mary. The sweet thing is even though most are made for exploring in the countryside, you can adapt them for use on the ship with a little imagination. All I would need to do is substitute appropriate Non-Player Characters for the location. They are:
·        Confrontation – Used when two groups square off and fight. This can take place on the ship, in an alley, or on the tabletop while exploring the countryside.
·        Conquer – Used to stake claim to territory and drive all opponents off. I could use it in a bar or tavern setting where an obnoxious group wants to take it over for the night.
·        Contact – Although used for discovering a primitive race or lost place, on the Brittany Star I could use it to try and find a specific NPC.
·        Explore – Used to explore unexplored areas of Lemuria. This could also be used when exploring different parts of a town or in this case a ship.
·        Gathering – Used to trek around the country gathering food to survive.
·        Hunt – Used to hunt a specific animal or creature. On board the Brittany Star? Arizona Bob could be hunting for a drink!
·        Job Offer – Someone offers you a job.
·        Raid – Used to raid an opposing location or defending yours.
·        Rescue – In this Encounter you try and rescue someone. Maybe Sarah Jane’s been kidnapped and being held onboard the ship or in a seamy part of Mission St. Mary.
·        Scavenger Hunt – This is the follow up to a Hunt in the countryside where you have attracted unwanted visitors.
·        Travel – The Travel Encounter is used when you are moving from area to area. This could be inside a town like Mission St. Mary, onboard a ship, or even moving about the countryside. 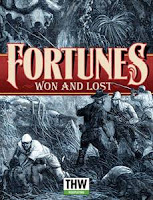 In Fortunes Won and Lost, we have the additional military based Missions for use in the countryside, which could be used in town and again, onboard a ship. They are:
·        Patrol – You are to explore the table and spend time scouting on the opposite edge, resolving all PEFs – Possible Enemy Force markers. You can adapt this for patrolling a town or ship, making the rounds, as part of the local police or security.
·        Raid – Used to raid the enemy.
·        Defend – Used to protect a location or someone from enemy raiders.

All together about a dozen adventures to choose from. I could roll randomly or choose which one to play. I choose …