Meanwhile, outside the Dancing Frog...

Sara Jane and Arizona Bob leave the Dancing Frog and are confronted by the three Italian soldiers. Time for a Fistfight. Everyone rolls 2d6 to determine the order of action. One Italian scores a 9 and will go first - everyone else scores an 8! 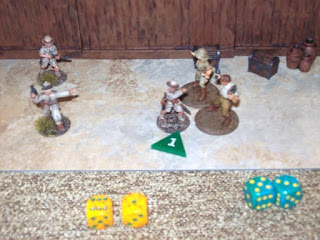 The Italian goes first and moves into contact with AZ. Each guy rolls 2d6 versus Rep - AZ passes 2d6 and the soldier 1d6. AZ had a chance to KO his opponent, but only succeeds in landing a few punches that drops the soldier's Rep down by 1 point. The fight goes on... 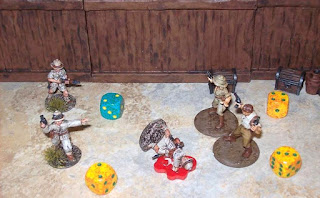 Bam, bam , bam! AZ passes 2d6 more than the soldier and down he goes. As the first fight is over, the rest of the guys roll off to see who goes next. Sara wins and will go next. She figures AZ has it covered so chooses to pass! 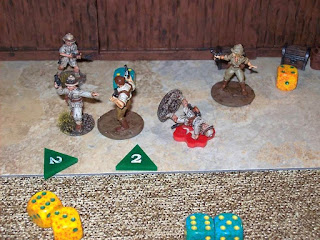 The next active guy is AZ and he moves into contact with a soldier. Each rolls 2d6 and both pass the same number of d6. This means they both take 1 drop in Rep. The it happens  again! 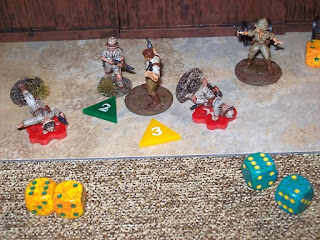 AZ takes out the soldier, but the 2 Rep points lost remain with him until ALL fights are over. The last Italian charges and the fight begins. Back in forth it goes with the Italian scoring damage on AZ, who rallies ... 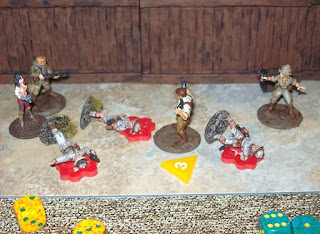 takes down the soldier. AZ is now at Rep 2 for fist fighting, but lucky for him there's no one left to fight. His Rep returns to 5.