In Part Two we explained what Edd's Pub is about - a jump off point to another world. Want to go by yourself? You can do that as you could recruit NPCs over there. These could be those that crossed over before and can go back and forth, They could be those that lost their Coin and can't get back. Or they can be NPCs from the Other Side, with no desire to leave.

But let's assume you want to start a Star and recruit your first Band to cross over.That's easy. You can automatically recruit 4 Grunts.

They must be from your own Race and are assumed to have the same Alignment as you do. After the first Band of recruits you will be able to recruit NPCs from other Races and possibly, other Alignements. That's where Edd's Pub comes in  handy as there are four different Races at the Pub.

There are easy rules to generate the stats for your recruits...Rep, Class and Armor Class. Their Rep will always be lower than your Rep and their Class will determine their Armor Class.

Here's Fizzbo's Band of Recruits that he brought to Edd's Pub.

Each gets a Coin and down the hall they go to the Other Side. First stop is the Woods. Here's the Band entering the Woods. 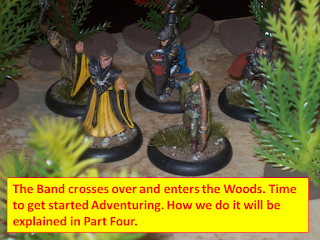