Part One
Things quieted down after the first fight and the Marines split into two groups. Each Squad moved through opposite sides of the facility, going through rooms and corridors. As they did, this reduced the chance of running into a PEF and if one was generated by the Activation Dice, it could only appear in a section that the Marines had not entered. 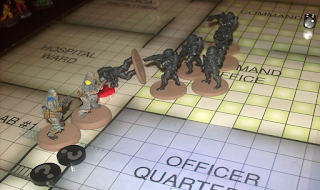 Bad Activation Dice resulted in  2 PEFs in section 1. This combined with the original one and 1st Squad became pinned down by a Rep 5 Section (3 figures) of Rebels. Losing the In Sight, the Marines suffered an Obviously Dead casualty and were pinned down in the Command Office. Luckily they had Exo-Armor or the casualties would have been greater.

Meanwhile, 2nd Squad had reached section 3 and ran into a 3 man Section of Rebels which started a fire fight. 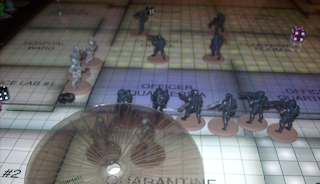 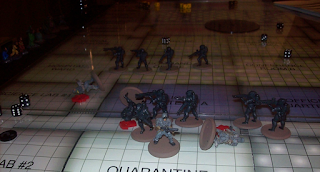 The Rebels fell back into the Quarantine Area, followed by the Marines. A grenade took out the last two Rebels, one dying and one being captured. 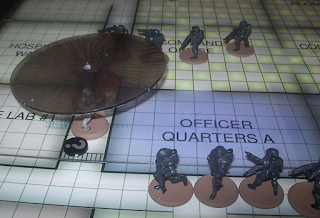 Meanwhile, 1st Squad won  the In Sight and launched a grenade, taking out  one of the Rebels and forcing the other two to fall back. 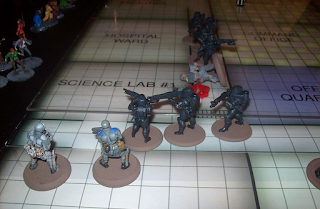 The last of the Rebels fell back to Science Lab #2 after coming under fire from 2nd Squad. 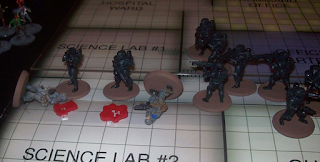 1st Squad followed up and after a brisk firefight in the lab, the two Rebels went Out of the Fight. 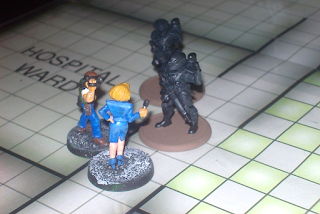 Coincidentally, Investigative Reporter Ashlynn Cooper was "in the area" and got an exclusive interview with the Marine's CinC.