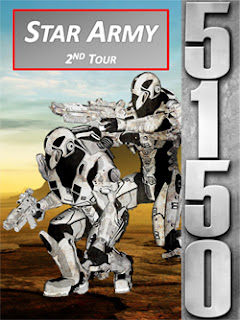 It's been 5 years since 5150 Star Army was released. In that time we've upgraded the mechanics and released 50+ books. Star Army was the oldest book and time for a re-do, using the current Final Version mechanics. This leaves only FNG, published 4 years ago, as not getting an upgrade.

Here's our latest play test using the Star Marine variant - a stand alone crossover book with Star Army 2nd Tour. Both share the same mechanics, but have different Missions as much of what Star Marines do involves Boarding Actions and Rescue Operations. 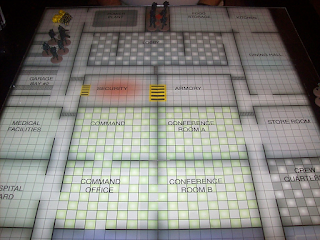 I decided to use a map from Infestation (2007), an original 5150 scenario book, currently out of print. Two Squads of Star Marines would check out a deserted Gaea Prime research facility located in/near Xeog Space.

It started with the Squads entering the facility from two directions. As the facility was abandoned years ago, I set the Enemy Investment Level at 1, started with the normal 3 PEFs, but every time a new corridor or room is entered a PEF is rolled for.When the corridor or room was cleared out, they were finished resolving PEFs. In addition, every time the Activation Dice came up doubles a PEF would be placed normally, but only in a section that the Marines had not been in. if the placement d6 was for one of those sections, no PEF was generated. This made the Marines want to move through the facility quickly. 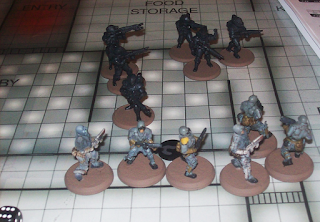 As 1st Squad exits the Lobby a Rebel Squad appears. In Sight is taken, the Rebels fire first and the Squad Leader goes Obviously Dead! Star Power reduces this to a Duck Back and the Squad falls back into the Lobby. 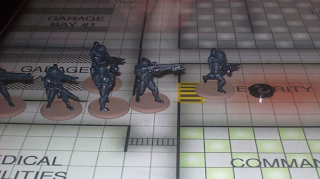 Meanwhile 2nd Squad heads towards the fight, resolving another PEF as nothing, as it moves through Security. 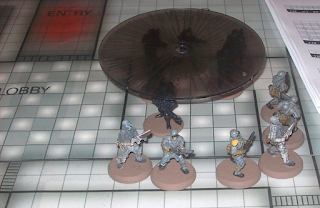 The Rebels activate and toss a Grenade into the Lobby. Thankfully, as the Marines are wearing Exo-Armor, they only suffer a Duck Back. Exo-Armor can stop all but the most fatal of hits that the Rebel small arms could deliver. 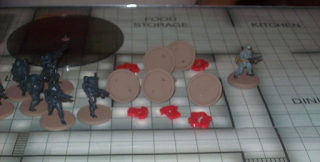 Taking a cue  from the Rebels, the 1st Squad Leader tosses a Grenade into the midst of the Rebels. Soft Body Armor is not as good as Exo, as two Rebels are killed and three go Out of the Fight. The last Rebel ducks out the door and disappears from the fight.