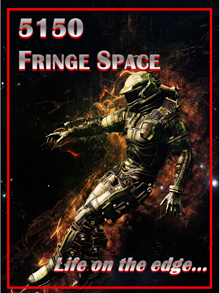 5150 Fringe Space is about living life on the edge. Sometimes that means salvaging space wrecks, hunting space pirates, or hauling cargo and passengers from one world to the next. But it also means carousing in a city, rescuing crewmembers from Alien abductors, and fistfights in a low end bar. 5150 Fringe Space is a RPG Lite game that can also be played as a man to man or ship to ship combat game. Inside you’ll find:

•A variety of Classes, Attributes, Professions, and Alien Races to make your characters unique.
•Man to man combat rules for when you’re on a planet.
•Ship to ship combat rules for when you’re out in Space.
•Rules for character improvement that rewards you when you succeed and brings you down when you don’t.
•Light bookkeeping Campaign and Economic systems that enhance the game instead of bogging it down.
•Color paper character and space ship counters.
•And much more…
5150 Fringe Space is designed to be played solo or same side against the game mechanics, but also works just as well when played head to head against your friends.
Playable with any figures you may already have or just with the color paper counters we’ve included. Play it any way you want, just play it!

Welcome to life on the edge. Welcome to…

5150 Fringe Space is a stand-alone game that is compatible with 5150 Urban Renewal.