5150 Fringe Space lets players use all the Attributes found in 5150 Urban Renewal and Fighter Command. Billy has Stone Cold for a +1d6 while the Hishen are Rep 3 with Slow to React -1d6.
All count as Military so the auto success each receives will cancel each other out. 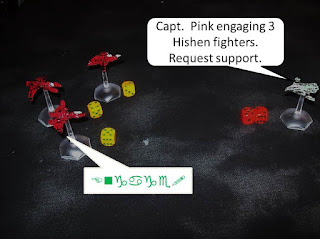 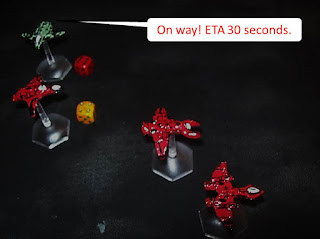 Billy wins on the Dogfight Table and has the Advantage as they go to the taking Control Table. Billy wins there and can fire. Scratch one Fighter. 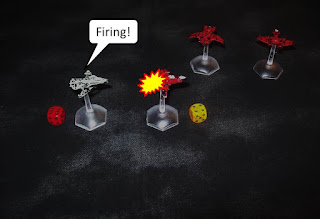 Both Hishen Fighters pass the Continue On Test for seeing their friend get destroyed. Back to the Maneuver Table where all roll looking for successes. One  Hishen Fighter wins while the other ties. Winner advances to the Dogfight Table with a +1d6 Advantage. The other Hishen returns to the Maneuver Table. If it had won, it would have moved to the Dogfight Table as well. 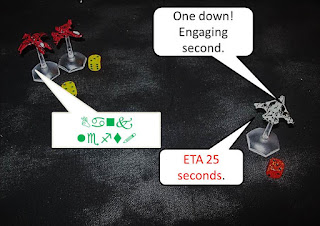 The Hishen wins on the Dogfight and counts the Advantage on the Taking Control Table. If it wins there it will be able to fire scoring at least 1 hit - enough to destroy the Navy Fighter! 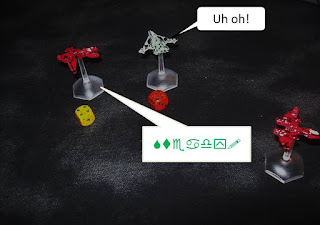 Billy can't take any chances and burns 5 Bonus Dice, enough to tie and force the fight back to the Dogfight Table. 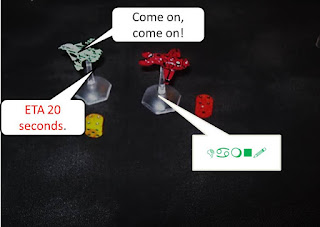 While the other Hishen Fighter is still on the Maneuver Table - essentially out of the Dogfight at this moment - the Hishen burns the last of its Bonus Dice and wins on the Dogfight Table again! 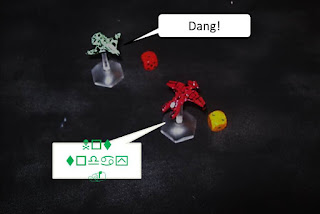 Billy burns the last of his Bonus Dice and they return to the Dogfight Table for a 3rd time! Note that the player (Billy) has to declare how many Bonus Dice he will use before rolling for the NPC. 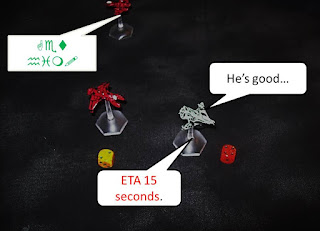 Billy narrowly wins and we go to the Taking Control Table where he wins there too! Fire! The 2nd Hishen Fighter is destroyed. 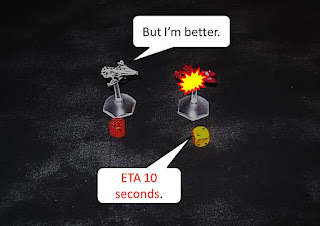 Billy returns to the Maneuver Table and regains some Bonus Dice. But the remaining Fighter must take a Continue On Test for seeing another Fighter get destroyed. 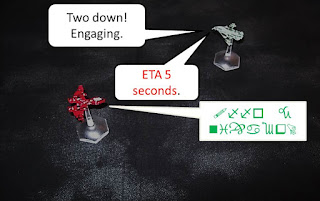 Failing the test, the Hishen Fighter Breaks Off, ending the fight. 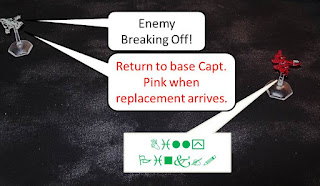 Holy crap! I thought the 3:1 odds would make it balanced, but I didn't realize that the Rep 3 would force Billy to burn all of his Bonus Dice. If the 2nd Fighter would have won on the Maneuver Table and double teamed Bill on the Dogfight Table, things could have went differently.
Posted by Ed the THW Guy at 10:40
Email ThisBlogThis!Share to TwitterShare to FacebookShare to Pinterest
Labels: 5150 Fighter Command, 5150 Fringe Space, AARs, Hishen War, Two Hour RPGs, Two Hour Wargames