Here's the end of the set of games Mack and I played earlier this week. They were played in a two hour period, if that, and consisted of three encounters. Some comments on the rules and some story building as well. 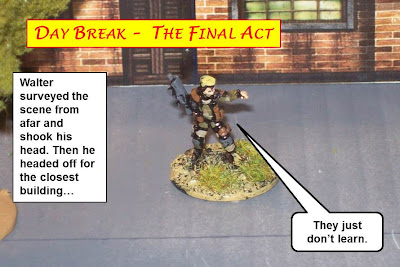 Here's where truth is stranger than fiction. Doubles were rolled for activation
and as it was equal or less than the ER of 3 it signaled a random event. 3d6 are rolled and "13". It's the cell phone again! 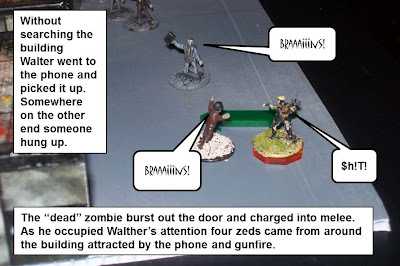 After Walther plugged the zed he went to answer the phone. Snake eyes were rolled for activation. Another random event! Talk about long odds. The random event was that the last dead zombie really wasn't dead. Instead he gets up and charges! 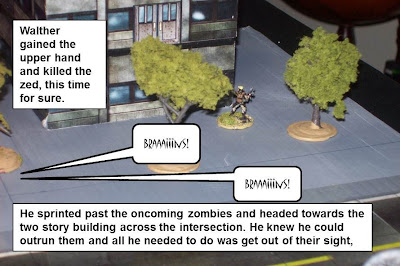 With five zombies near by Walther decided to run for it. Being a Rep 5 means he activates more often than the zeds, one benefit that Jim Bob and Tess didn't have. It wasn't long before Walther was free of the zeds and could do more exploring. 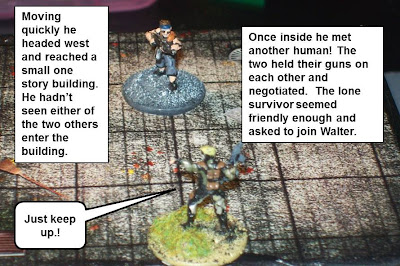 Entering a building resulted in human contact, one Rep 3 Survivor. A Meet & Greet allowed for the two to barter and saw the Survivor trying to join Walther due to his much lower Rep. Mack went for it and they took off. 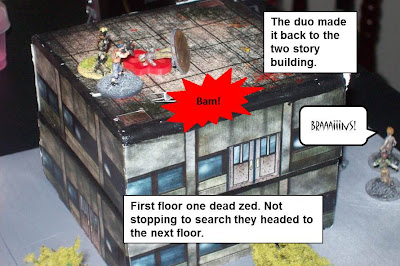 Clearing buildings with two characters is easier than going solo in that you have a second character backing you up should things go badly. 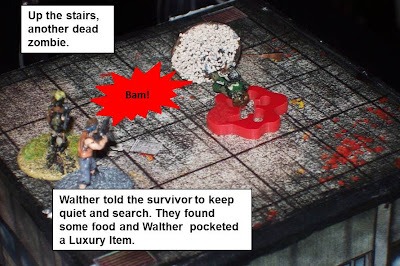 After the second floor was cleared there were loads of zeds walking around. Resting awhile resulted in the zeds losing interest and their bearings and shambling off in different directions.
All the buildings had been searched but there were still two places to gain loot...Jim Bob Joe and Tess. 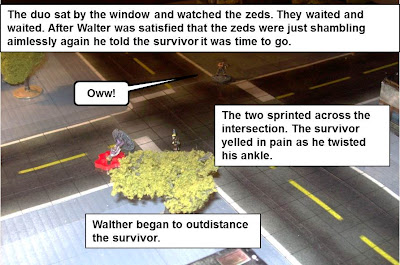 Yikes! Really? Another random event? I've played many ATZ games with little or no random events. Obviously this wasn't one of them. The Rep 3 survivor twisted an ankle, dropped his movement to 6", like  a zed. Worse than that if he failed on a Fast Move test he would trip instead and be stunned for one turn. With the hurt ankle the survivor didn't make it to the building.  Worse yet the activation dice was humans 5 and zeds 3. He couldn't activate and the zeds would. 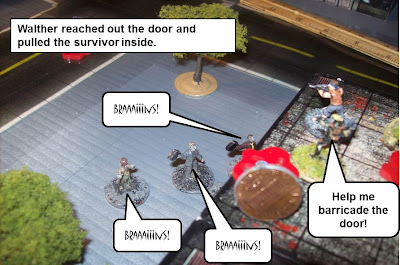 But Walther could. He could open the door and add the Rep 3 survivor to the group and pull (activate) him inside. Then they could barricade the door. That would occupy the zeds while they looted Tess and climbed out the back. 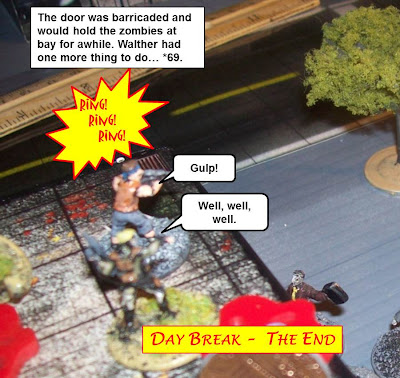 They then looted Jim Bob Joe. That left one loose end to tie up. That's when I thought to have Walther star-69 the phone, ring back to whomever had called previously. To move the campaign along I decided it would be the Rep 3 survivor. That was putting bow on the package, end of the Encounter.

Posted by Ed the THW Guy at 09:11
Email ThisBlogThis!Share to TwitterShare to FacebookShare to Pinterest
Labels: AARs, After the Horsemen, All Things Zombie - Final Fade Out, ATZ, Two Hour Wargames