After Jim Bob Joe there was Tess, the Ganger chick from Houston. She's a Rep 4 Grunt with an Assault Rifle and an attitude. 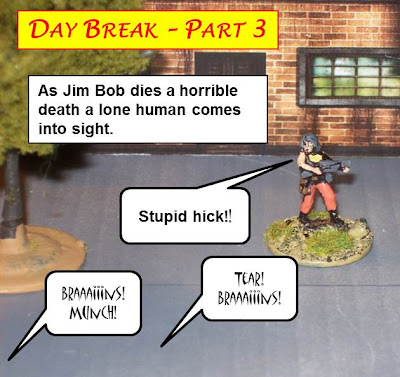 Tess decides to stay as far away from the zeds as possible. 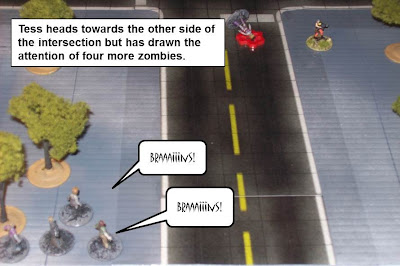 Except as a new human when she enters the table she generates 1/2d6 zombies and scores three new ones. 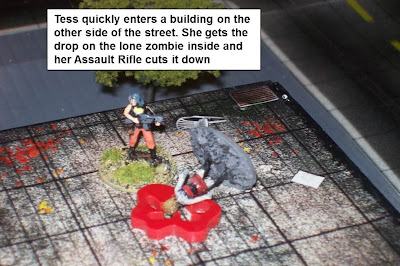 Tess activates and successfully Fast Moves across the street and enters a building. She doesn't take any chances and fires full auto, 3 shots. But she generates two more zeds. The bad news is they are generated as soon as the shots are fired. Generating zombies as soon as you shoot is different than the old rules. It takes some time to get used to.The good news is they cannot  activate on the same turn that they are generated. 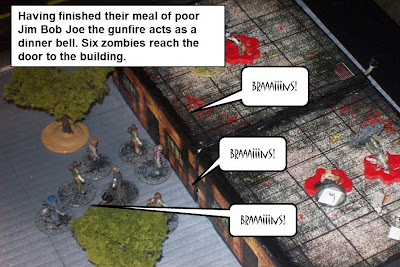 But the others can and get closer. The shots attract the zeds that have just finished off Jim Bob Joe. Tess really needs to activate first. Except she doesn't. Even worse she won't activate at all this turn. 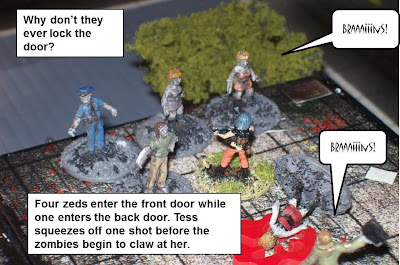 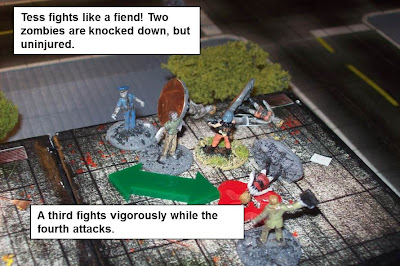 Melee takes place one at a time, no splitting d6 anymore. And melee is one round and not continuous so if you tie with an opponent it allows for attempting to break off the melee. But tying gives other opponents the +1d6 evenly matched bonus. 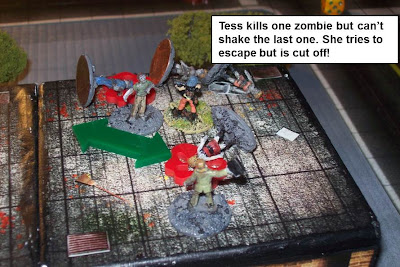 It's easy to knock down the zombies, not so easy to to kill them anymore. They take melee damage normally with the difference in successes being the Impact. So beat a zed by 1 you better roll a 1. Otherwise it just gets knocked down and can regain its feet and continue the melee. 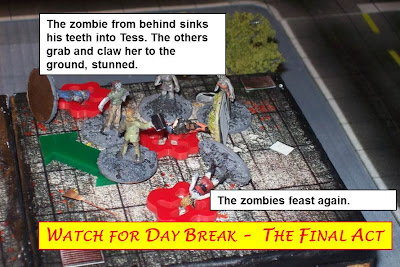 Melee isn't recommended unless you have a real melee weapon. A one hand ranged weapon makes you count unarmed (-1d6)  in melee while a two handed ranged weapon counts as an improvised melee weapon (0d6). Want to arm yourself with a one hand melee weapon and big ass pistol? Sure can, but one of them will count as being used with your primary hand while the other takes a -1 to Rep for being the secondary hand. But don't fear, maybe you'll get lucky and be ambidextrous.

As we still had more time Mack rolled up another Grunt. This time a  Rep 5 Ganger with an Assault Rifle.

Posted by Ed the THW Guy at 11:37
Email ThisBlogThis!Share to TwitterShare to FacebookShare to Pinterest
Labels: AARs, After the Horsemen, All Things Zombie - Final Fade Out, ATZ, Two Hour Wargames