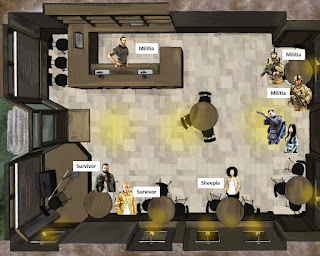 Spence and Bee successfully interacted with another Survivor and told them about a club off of Academy near the old Starbucks and Whole Foods. The old Sushi place. Anyway, there would be only 3 PEFs to be resolved. I decided I'd use the Night Club Battle Board. It's not included in The Big I, but is one of the Boards that can be purchased. What's nice about them is they can also be used with 5150: No Limits, our Sci Fi rules, as well.

In ATZ - Evolution you roll to see what you have met. I decided that I would place the Characters in the club based on the numbers that could be generated by the scenario. This gave me three Militia, two Survivors and a Sheeple. I placed them in a logical way - bartender and other Characters about the club.

As Spence and Bee could only resolve 3 PEFs I would have to pick and choose who to deal with. First I went with the bartender.

Another thing you can do with Character generation with ATZ - Evo. Instead of using the quicker way of generating Characters, going down the List from top to bottom, you can roll for them using the same List. I did  and scored a "5".  The bartender was Rep 4 People 3 Savvy 2. Here was a good opportunity to interact!

Well, being consistent, bad luck Spence passed 1d6 and the bartender passed 2d6. Interacting with Militia and passing less d6 means the bartender wants Spence and Bee to turn over their weapons. In this situation, I figured that was club policy and they would get their weapons back when they left. Taking it a step farther, I decided all NPCs in the club would be unarmed as well. 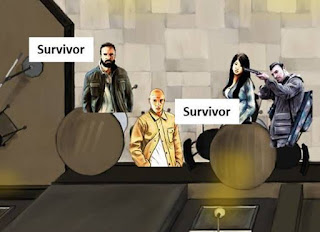 Well that left the Militia in the corner, a Sheeple and two Survivors. I decided to resolve the Survivors, but Bee would do the talking. The two took their drinks and sat at the table next to them.
One was a Rep 4 People 4 Savvy 3 and the other Rep 3 People 2 and Savvy 3. The Rep 4, as it has the higher Rep, is the Leader. Bee passed 1d6 and so did the Survivor so he pretty much ignored Bee. Two PEFs down and one to go.

This is where I decided to use the rules as they were intended to be used, and my guess, often not used. Spence would do some gambling while Bee would interact with the Sheeple. There were 5 potential NPCs to gamble with so I rolled to see how many would gamble and scored a 4. Including Spence there'd be five gamblers. My plan for Bee went south, what's new, as the Sheeple wanted to play. As gambling is done versus Savvy, this could be fun for Spence as he has a Savvy of 5. 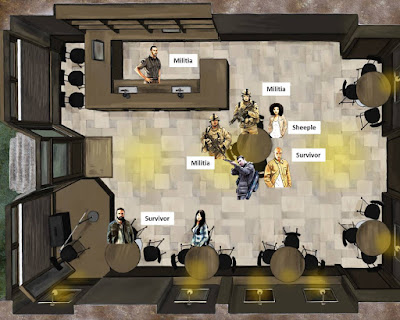 Rolling for the players I generated. 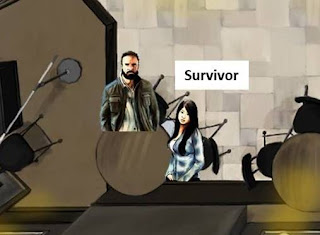 But before I play the game, something fell into my lap. The other Survivor Rep 3 People 2 was now alone across from Bee. 3rd PEF and time to interact!
1st round - Bee passes 1d6, the Survivor 0d6. Bee gains 1 Increasing Rep d6. This also let's Bee attempt to Further Interaction.
Bee passes 2d6, Survivor 1d6 - Success. Bee gains a 2nd Increasing Rep d6. Now how successful was Bee? I roll 1d6 and score a 5. The NPC Survivor agrees to be recruited!

************
I figure I'll stop here as this post has been pretty long. So far no one's been punched or shot, but it's been a great game as it is developing the Story. I couldn't have foreseen this at all and I'm liking it. Part  Two coming up in the next day or two.