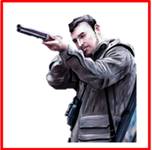 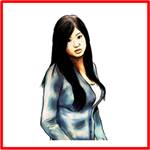 Spence and Bee are two of the new counters in the Big I along with SWAT, Military, EMTs and Civilians.

#1 Find
You come down the Sandias and hit the outskirts of town. These Northeast houses were high end back in the day. Many are empty now. You need to find someone, a human, you can interact with that can get you hooked up with supplies and maybe a recruit or two.
************
To advance to the next Encounter, you must first successfully Interact (All Things Zombie – Evolution page 16) with a human NPC, then successfully Further Interact with that NPC.

I roll 2d6, of different colors, to see what the 1st PEF will be. Why two different colors? Because if they double up, I have met Sheeple (ordinary people). I score double twos. Al right, Sheeple!

Rolling for how many, I score a total of 3. Here they are.


Spence and the Sheeple Leader Interact. Sheeple that interact with non-Sheeple have a -1d6 penalty.  That means the Leader will roll 1d6 versus its People Skill of 4 while Spence rolls 2d6 versus his People Skill of  4. I feel pretty good about my chances, especially after the Leader rolls a 6! Hahahaha! I roll, for Spence and score - BOXCARS! Are you kidding me?! The Sheeple are not impressed, ignore Spence and leave.

Only one PEF left to resolve and here it goes. Roll the 2d6 to see what we've run into and it's one Rep 4 Militia man. More importantly his People Skill is 4, and he'll be using 2d6, unlike the Sheeple.
Spence and the Militiaman Interact, Spence throwing in a little Sweet Talk  (gaining 1 Decreasing Rep d6), but this is important. Spence passes 3d6, the Militia man passes one. Now I can Further Interact with the NPC. Again Spence Sweet Talks (that's 2 Decreasing Rep d6). Both Characters pass 2d6 even though Spence rolled 3!

That ends the Encounter. But when playing the Big I, the Encounters combine, representing less than a month. So instead of limiting the players to two Encounters per month like normal. you can play all of the Encounters, more than once if directed to, and count it as one month. This also means you only cash in the Increasing and Decreasing Rep d6 once, at the end of the month - after all Encounters are done.

So night falls and Bee and Spence find a place to crash. Tomorrow, they'll go at it again.
The whole adventure only took about 10 minutes and some dice rolls.
************

That was an eye opener and good example of why I  love the THW gaming system. You never know what's going to happen and where your Story will go.

Posted by Ed the THW Guy at 12:48
Email ThisBlogThis!Share to TwitterShare to FacebookShare to Pinterest
Labels: All Things Zombie, ATZ - Evolution