“Run that by me again Sarge,” Randall asked.
“Captain says we’re looking for a secret laboratory that may be housing a German scientist creating zombies.” Sarge replied “Zombies…undead creatures.”
“Right… Maybe some vampires and werewolves too?” Randall said with a smile.
Sarge scowled and said “Be serious. Although there have been reports of werewolves; vampires? Really; vampires? Now grab Wilks and let’s go”.
Randall shook his head. “What have I signed up for?”
**********************************
Here's a look at some of the cards included in the game. You can use minis if you want. 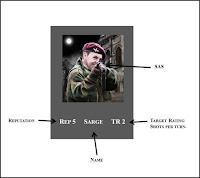 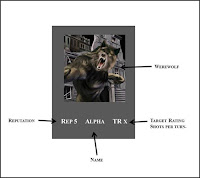 I have 21 days to complete the Campaign – find Herr Doktor and destroy his laboratory. Here’s a quick AAR of my first Mission of WWZ. It’s a Raid and will burn up one day of time.

Each Mission you can resolve up to 3 Contacts – a chance to run into someone or something. I roll 2d6 versus the Contact number of 5 – the Campaign starts out with a high chance of Contact – and score a 1 and 1. As each d6 is equal or lower than the Contact number, I pass 2d6. Looking on the Contact Table I see there’s been contact. Something new on the table – I add the scores of the passed d6 (2) and it tells me how many I have run into – two more than my group (3) so five characters. One less table to roll on!


Missions are either in the City or in the Lab. I roll 1d6 and add the result (6) to the Contact number to see what I have run into. Uh, oh – 5 German soldiers. As there’s only 5 German soldier cards no need to randomly draw for them. I set up the fight on a 12" x 12" table space. 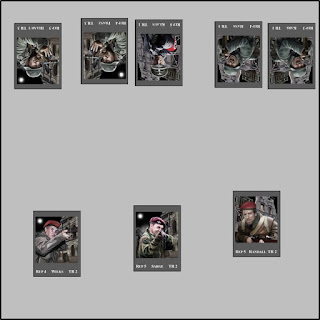 I now roll 2d6 versus Sarge’s Rep of 5 and pass 2d6. Klaus, the German Leader rolls 2d6 and also passes 2d6. Looking on the Action Table the side with the Advantage acts first – I open fire. Each of my soldiers have a TR of 2 so can fire two shots. I split them up as shown and roll 2d6 versus Rep. 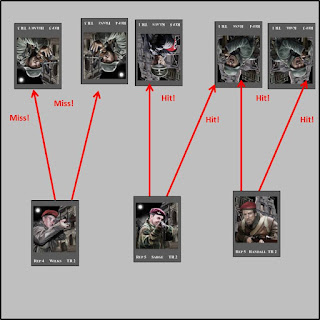 As no terrain is needed the placement of the cards tells the story.

·        If you’re ready to fight, place the card with its head towards the enemy so the player can read its info.
·        Placing the card with the bottom facing the enemy means it’s in Duck Back – can’t see or be seen.
·        Lay the card sideways and it’s Out of the Fight.
·        Place it face down and its Obviously Dead.
Here's what happens after the first round of SAS fire. Note that the two Germans that were missed can immediately return fire on the soldier that shot at them. They do. 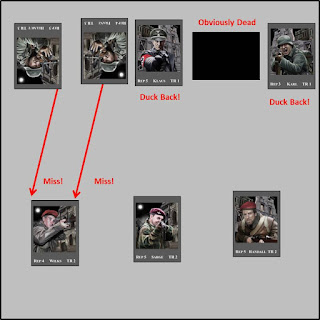 And miss. The soldier fired on can now return fire and scores 2 hits. 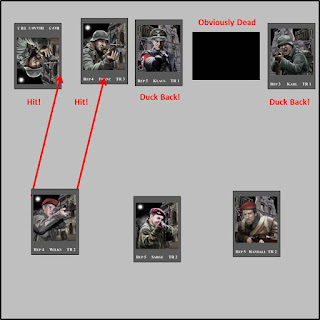 Damage is taken, one Out of the Fight and one Duck Back. As all firing is done, both active and return fire, both sides take the Will to Fight Test. Both sides pass. 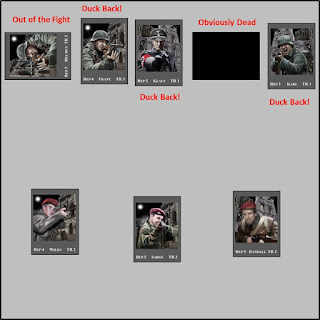 The Germans are now active and spend their turn recovering from Duck Back. They are now in sight and can see and be seen. However, recovering takes up their whole turn. It's now the SAS turn and they fire. 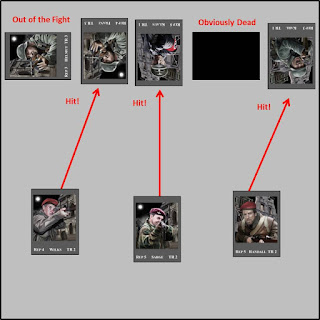 Here are the results. Note the placement of the cards. Again, no need for terrain. 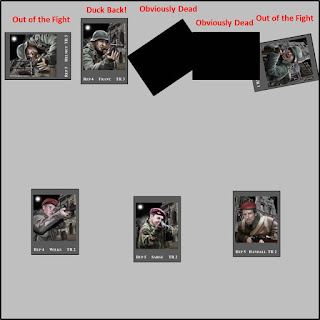 As the Germans cannot fire it ends the turn and time for the Will to Fight Test. The Brits pass and the last German leaves the table. Fight over, but... 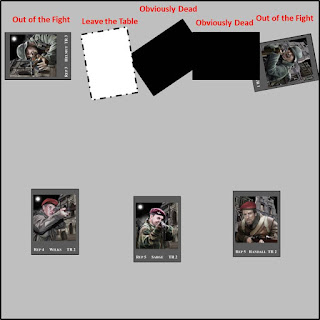 The fight is over and there are two German soldiers left Out of the Fight. These are captured and interrogated on the spot. Neither soldier provides any info. Now what to do with them? We'll quit the Mission, take them back to HQ and reap the benefits.

Each captured German soldier returned drops the Contact number by 1 so it's now 3, the lowest it can be. The Mission wasn't a success as I didn't resolve all 3 Contact, but reducing the Contact number to 3 was worth it.
Posted by Ed the THW Guy at 15:07
Email ThisBlogThis!Share to TwitterShare to FacebookShare to Pinterest
Labels: AARs, THW Game Design, Two Hour RPGs, Two Hour Wargames, Weird War Zed, Zombies