Here's a sample of the counters and how they have all applicable stats.  I will be using a platoon of 3 Thunder 1B light tanks on a Patrol Mission. It is the first of the 10 Missions Hammer & Anvil; a Campaign versus the Hishen. 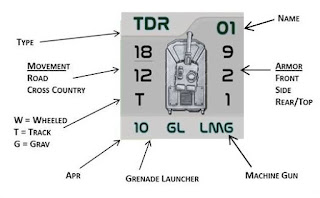 Before the activation dice are rolled for the first turn I enter the table. It's been divided into 9 equal sections. I choose to enter through section 8 and move full speed into section 5. I then roll to deploy the three Possible Enemy Forces (PEFs) and score a 3, 4 and 6.

The white  PEF, the closest, one is in Line of Sight (LOS), and must be resolved...  "Something's out there". I remove it and resolve future PEFs with 3d6 instead of 2d6

The next closest PEF is in section 4 and behind a hill. Out of LOS means it isn't resolved yet. 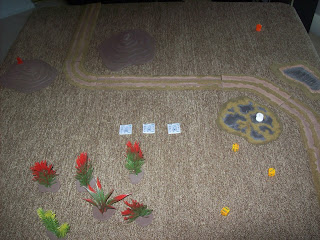 The third PEF, the orange one in section 3, is within LOS so is resolved. I pass 2d6 and there's contact. 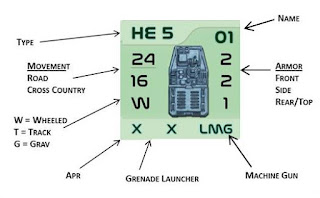 It is revealed as 1 HE 5 Hishen Armor Personnel Carrier (APC). 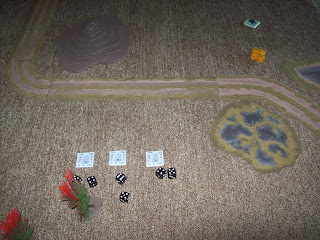 In Sight is taken and I win. We open fire on the under gunned and under armored APC.  With my APR of 10 and their frontal armor of 2, any hit will be rolled on the Penetration Table at a Target Number of 8. I score two hits and roll 2d6 for each hit versus the Target Number of 8, looking to score a result equal or less than 8. The only hope the APC has is that I score 5, 5 or 6, 6 meaning that the lasers would cut straight through the APC and only kill a crew member while the vehicle would still be able to function. Otherwise... 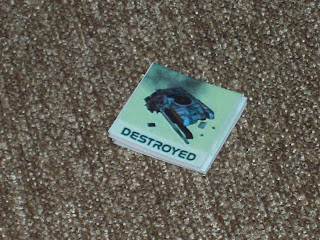 The APC is destroyed, I mark it with a counter, and that ends the Deployment Phase. I roll activation and win (the Blue d6 is higher). On a Patrol my objective is to spend one turn within 6" of the table edge in sections 1, 2 and 3.  Activating first, my platoon moves into section 2. 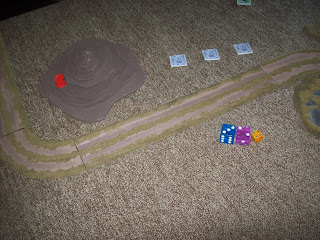 The enemy PEF rolls for movement and moves towards my flank. I'm not too worried as one major difference in Hammer & Anvil to Hell Hath No Fury, our WW2 vehicles rules set, is the In Sight Test. In HHNF the In Sight is only taken if you can see the target to your front 180 degrees. Due to then higher tech of the sci-fi rules, radar and similar allows for a 360 degree In Sight. So even if the PEF comes over the hill onto my flank, I will still get an In Sight.

Except there's another problem I wasn't aware of...