I decide to make my gang only 3 members big, less people to split the loot with. I rolled for their Rep and they were both Rep 4. Gunmen gave them the Marksman Attribute. Unfortunately rolling for one Attribute each gave one Coward and the other Slow. 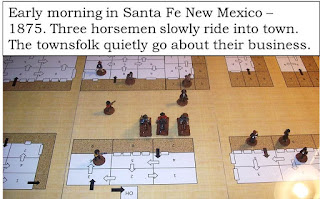 There's over 20 areas on the Campaign Map that you can adventure through. I chose Santa Fe which has an average Settlement Level. This meant not a lot of people in the towns while still possible to get a decent amount of loot. We rode into town and I placed the horses in front of the Bank.

Next I placed the Citizens on the table. The number of Citizens is Settlement Level (3) times the number of Outlaws (3). So I rolled 9d6 and the result determined the section of the table they would start on. 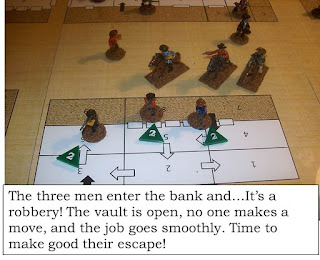 After the Outlaws enter the Bank there's two things to find out. The 1st thing to find out is unforeseen circumstances. This can be anything from a crazy Bank Employee to problem with where the horses can be hitched. There's only a 33% chance of something going wrong. I rolled 1d6 and something did; 2 Rangers recognized us as we went into the bank!

The 2nd thing is the Vault situation. I lucked out and rolled well. The Vault was open and there was 6d6 Increasing Rep d6 in loot for the taking. Each figure took 2d6 worth. 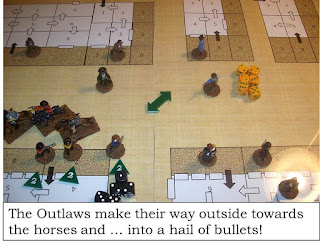 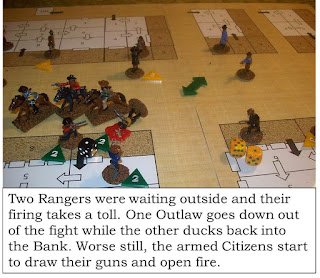 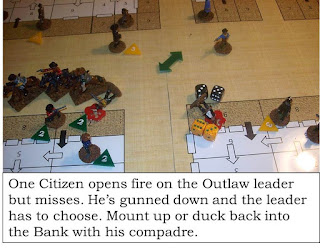 Once we went outside I rolled for the Rangers. Holy crap! One was a Rep 6 the other a Rep 4 and both were Gunmen - so they had Marksman as an Attribute. They could fire one shot and roll twice, counting the best result. Or they could fire twice with their pistols.
They opened fire and one of my Outlaws was hit and went Out of the Fight.

The shooting alerted the Citizens. A couple had weapons and also opened fire, the rest ran into buildings to get guns! I fired back and took out a Citizen, but as my other Outlaw had failed his Reaction and Ducked Back into the building I followed him inside. 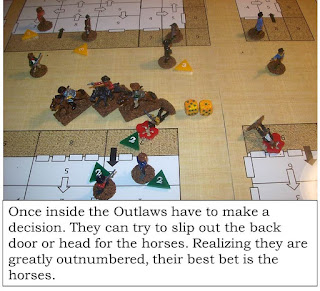 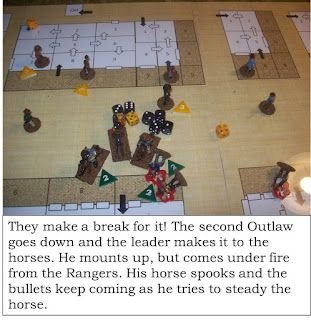 Once inside I decided we'd make a run for it. Lucky for us the Citizens failed to activate but the Ranger did. He waited as we had to come out eventually or be surrounded. Being outnumbered 5 to 1 didn't look so good so we  ran for the horses. The Rangers cut down the last gang member, but I made it to the horses.

Mounting up is simple. Roll 2d6 versus Rep. Pass 2d6 and you mount up and can move off the table when next active. Pass 0d6 and you can't get on the horse but can try again when next active. I passed 1d6. I mounted up but had to spend the next turn of Activation in place trying to control the horse!

I got hit twice including an Obviously Dead but Star Powered my way through it. 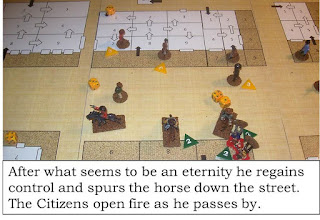 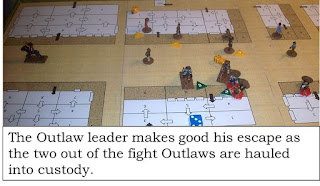 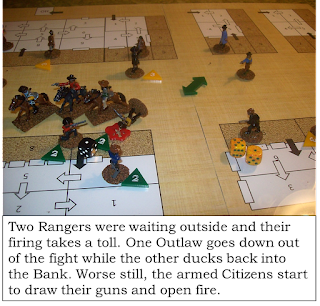 Finally I exited the table being shot at all the way out. The good news is I passed 2d6 on the Posse Table so made good my escape.

Well that was fun (!?). Worked well mechanically and was interesting in that, as usual,  I didn't know exactly what was coming. I can see if I played it again it would play differently as there was only a 6% chance of running into the two Rangers and a Rep 6 one at that.
Posted by Ed the THW Guy at 11:36
Email ThisBlogThis!Share to TwitterShare to FacebookShare to Pinterest
Labels: AARs, Six Gun Sound, Two Hour RPGs, Two Hour Wargames