"I thought New Market was a small town," Arthur said as the trio made their way through the street. "Seems pretty crowded."

"It is," replied Dion." Except for one week out of the year when the New Market Round is held. It's this week."

"Shouldn't we deliver the message as we were told?", Carl asked.

"We will," replied Arthur. "Three days on a horse builds an appetite..."

"You mean a thirst," Dion said. "Follow me, I know just the place."

Yes, I know, I probably should have went directly to the house where the message is to be delivered... but what the heck, it's off to the Bawdy House to see how it works. Here's a map of where it's located and how we got there. 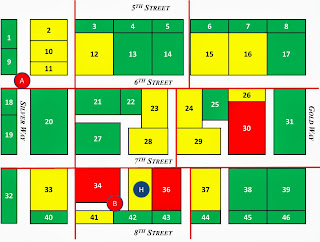 (Defining Moment was Barkeep and Opposed Challenge result "Swept off its feet!" Barkeep is a friend and gives Favor (free drinks). So figure might as well go for another Challenge. Ask if he knows anything about the person they must contact with the message.)

"I've not seen myself but I've heard stories,"  the barkeep replies. "She has ties with influential people."

From the upcoming free New Market Round scenario for BS&S.

We Suggest...
The actual race is run on the Saturday but the festivities begin on the Monday before. We suggest that players decide which day they wish to arrive and start having Encounters.  During this week players can choose to have a Voluntary Encounter every day. Involuntary Encounters can also happen every day so you will have an eventful time.
The Area Activity Level starts at 2 on Monday and increases one point per day until maxing out at 5 on Thursday. The following Monday it reverts back to 2.

I had decided that the boys had arrived on Thursday. This meant four possible Involuntary Encounters if they stood for the race. And I wanted to stay ...
Posted by Ed the THW Guy at 19:32
Email ThisBlogThis!Share to TwitterShare to FacebookShare to Pinterest
Labels: By Savvy and Steel, New Market Round, The Message, Two Hour RPGs, Two Hour Wargames