Fire! Dueling with PISTOLS for By Savvy and Steel! AAR - Conclusion 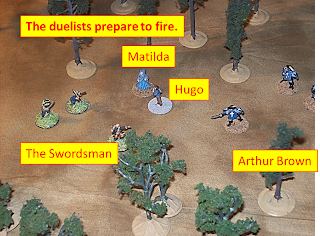 ***************************************************************
All those involved arrived at the appointed place, a clearing in the woods, at the appointed time. As Carl and Hugo loaded the pistols Matilda glared at Arthur. He realized that no apology, even if it was coming, and it wasn't, would be enough to satisfy her. Besides, the Rogue had shot first.
“Remember what I told you,” Dion said. “Arm straight, take a deep breath and …”
“Suck in my belly. “ Arthur replied with a smile. “Yes, yes, I remember it all. Thank you my friend.”
“Thank me with a drink after this, “Dion said, slapping Arthur on the shoulder.
“I hope so,” Arthur thought to himself. He wondered what would happen if he lost. Dion and Carl had also testified in court. No, he shook his head, it ends here; it ends now.”
“Ready, Mr. Brown?” the swordsman asked.
Arthur nodded and the two paced off the distance. Hugo would signal the first shot. As the two stared at each other, at the ready, Hugo held the handkerchief up high. After a slight hesitation he let the handkerchief fall from his hands. Two shots rang out.
**************************************************************
I’ll go into how the duel works, step by step. Note that you do not have to use minis in a pistol duel, but is visually cooler. After the duelists have paced off the distance both take the Composure Test. As the Swordsman is a professional he has Nerves of Steel and rolls 3d6 versus Rep. He passes, as expected, while Arthur rolls 2d6 and passes, but just barely.  Both men are unshaken (shaky counts as a penalty on the First Shot Test.
Both men now take the First Shot Test. Who will get off the first shot? Dice are rolled and Arthur fires first!
Arthur rolls on the Fire Table and scores a hit. Hit location and damage is rolled. The Swordsman coat puffs as the ball grazes his back. The Swordsman takes the Continue On test and passes. The Swordsman smiles and Arthur realizes he hasn't yet shot.
The swordsman returns fire and rolls on the Fire Table. Arthur sees the puff of smoke and feels a sting of pain as the ball grazes his thigh. Arthur rolls on the Continue On table and they go to the next shot. 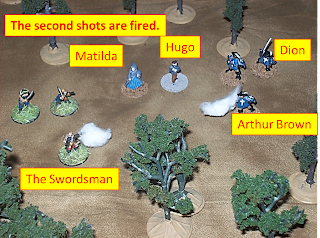 Rolling on the Fire Table the Swordsman grazes Arthur on the arm. Arthur fires; the Swordsman crumples to the ground, a serious wound to the head. The duel is over. 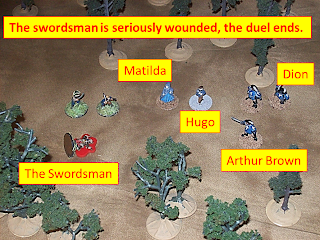 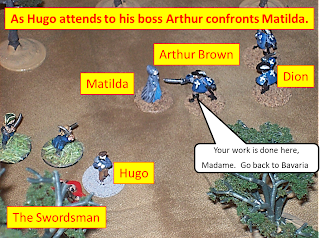 Fun little game with lots of tension as it can be over so quickly with one shot.And don't get me started on misfires. When the pistol misfires, no ball is discharged,but it still counts as a shot.
No do overs!
Posted by Ed the THW Guy at 21:56
Email ThisBlogThis!Share to TwitterShare to FacebookShare to Pinterest
Labels: AARs, By Savvy and Steel, Imagi-nation, Two Hour RPGs, Two Hour Wargames