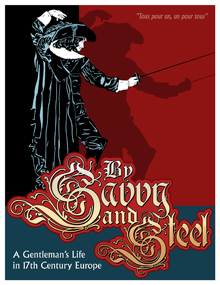 By Savvy and Steel is the swashbuckling game from Two Hour Wargames. Set in the 17th Century, in the fictional country of Edenstein (here's the campaign Map), players can adventure in the style of the Three Musketeers. We chose to set it in an ImagiNation because sometimes historical settings can constrict what the player can do. 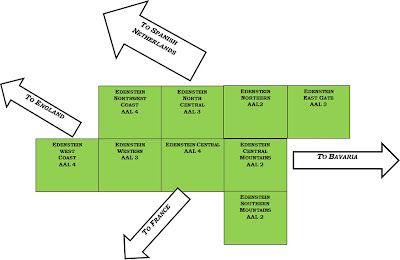 By Savvy and Steel is story driven game where the player takes on the role of a Gentleman (or lower if you want a challenge) and move about their career trying to gain Fame and Fortune.
Some of the Encounters possible are:
Carousing - Where the player can visit taverns to gamble, carouse and recruit friends or Mistresses.
Rescue - Where a character has to be rescued.
Robbery - The player can choose to play either end, as a potential victim or as a Highwayman.
Duel - Dueling for honor and Fame using a new set of dueling mechanics.
Escort - Where the player receives a summons from a high ranking Noble to escort someone, somewhere.
And many more.

Instead of tracking wealth or items we've gone to an easy to use Fame points system where your successes and failures adjust your Social Standing.

This AAR is the result of an Encounter where the hero was out carousing with his Mistress and they have run into her estranged husband  (the story line can switch gears very quickly). 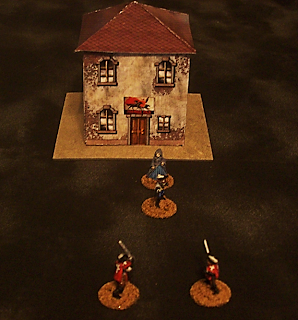 First turn the PEF is resolved and the husband has brought along help. Not exactly fair but what the heck, let's see how fighting two opponents turns out (as there ARE rules for it).

FYI - The duel mechanics supplement the melee rules that are used with larger battles. 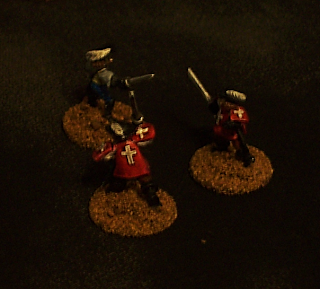 Our hero is Rep 5 while the husband is Rep 4 and his helper Rep 3. Note that each character has Rep and 5 dueling stats. A more detailed AAR will follow. Anyway, the two soldiers attack. 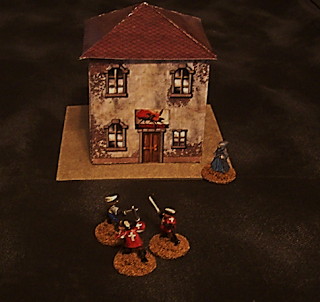 When fighting two opponents both characters roll their Dueling Dice, modified by the Dueling Table they are on. The higher scoring opponent is compared to the hero, this dictates how the fight goes. In this one the two push back our hero. 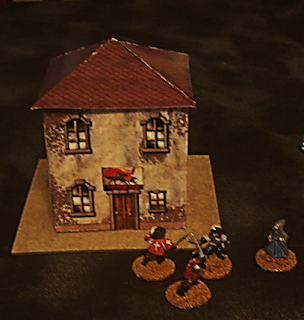 The duel continues and the hero is pushed back again. The opponents alternate scoring higher and the hero beats one but not the other. To win he has to beat both. 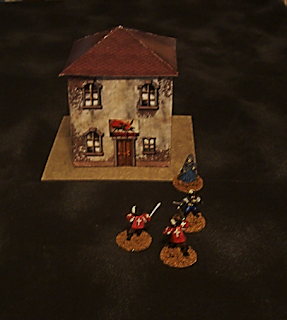 The soldiers score damage on our hero, even going to the Killing Stroke Table where physical injury can be scored. Luckily the hero avoids injury and they return to the En Garde Table, where dice are recovered...and the Watch can be summoned. Rolling to see if they show up I see that they do not but  the next time the duelists return to the En Garde Table I must check again. 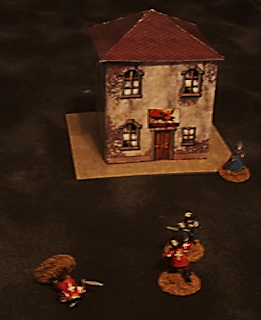 More turns of dueling results in the hero exhausting his enemies' Bonus Dice and he starts using his own. With a rush he begins to take control and applies a Killing Stroke to the Rep 3 soldier.  The soldier goes down with a wound and capitulates. The duel is now one on one. 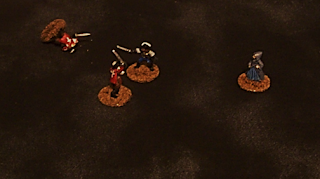 Both duelists score the same number of successes and it's back to the En Garde Table. I roll to see if the Watch has arrived and they do! 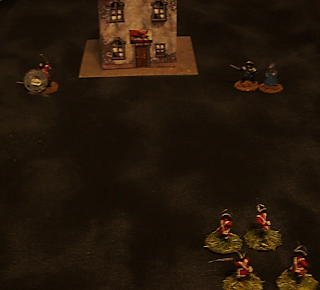 Dueling is technically against the law in Edenstein and getting arrested doesn't help anyone. Activation dice are rolled, our hero goes first, then the estranged husband and finally the Watch.
Time to leave, the hero breaks away, honor being satisfied by drawing blood. As he and his Mistress leave the husband helps his wounded comrade off the table. The Watch arrive to late to arrest anyone.

Posted by Ed the THW Guy at 12:38
Email ThisBlogThis!Share to TwitterShare to FacebookShare to Pinterest
Labels: AARs, And a Bottle of Rum, By Savvy and Steel, Two Hour RPGs, Two Hour Wargames