High Rise to Hell, the supplement for All Things Zombie contains 13 scenarios. They can be played individually but are best played in sequence. Here' an AAR of the first one called Black Hummers.

I choose to play the Crew as pre-generated  in the book. They match up to the Indiegogo figures soon to be released by Highlander Studios but could be any figures you desire. The Crew are 5 characters, one of each class, and I choose Nate, the military man as my Star Leader (Rep 5).

The rest are a Ganger, Survivor, Police Officer, and Civilian, all Rep 4 Grunts. The Encounter starts on a 3 x 3 table with an intersection down the middle. The gas station is in section 3. The Hummers enter in section 4 while Nate and the Crew enter section 9.

Two PEFs are dropped in the intersection (section 5) and are both resolved as add one to the Encounter Rating which now becomes a 5. 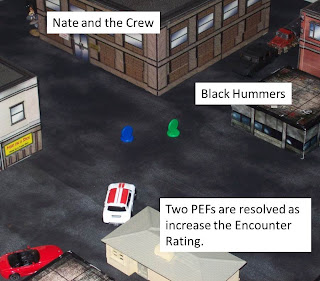 The last PEF is resolved as 10 Zeds. 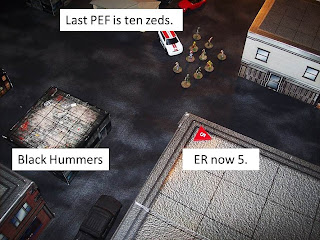 Each Hummer has twin SAWs mounted on the roof and accessed through the sunroof. They make quick work of the Zeds but attract more. 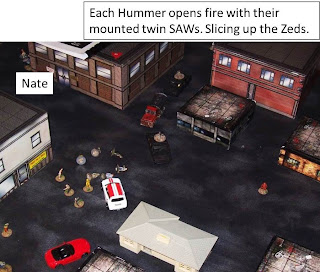 After the gas truck reaches the station the security teams exit the Hummers and start plunking Zeds with silenced weapons, limiting the number that can be generated by gunfire. 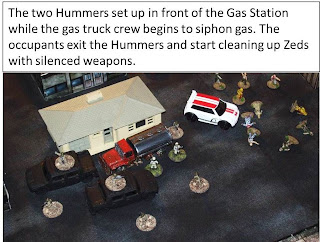 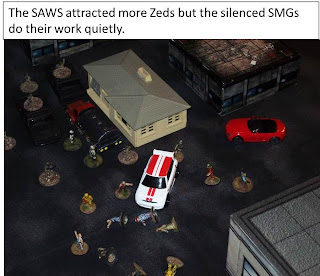 I decide not to engage the Hummers but instead play Peek a Boo. In this mechanic one character attempts to establish visual contact with the Hummers without being seen.
If successful the Crew will be able to follow the Hummers back to the high rise unseen.
If unsuccessful the security teams see the character and a firefight will start. The In Sight is used by the one character and against three security operatives picked at random. The nice thing about HRtH is that all NPCs Grunts are pre-generated for you. 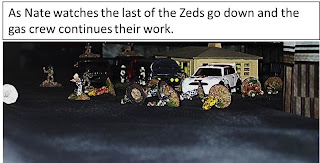 Nate wins the In Sight, contact is made, and after the gas truck loads up, Nate and the Crew can follow them back to Pro-Corp without being seen. 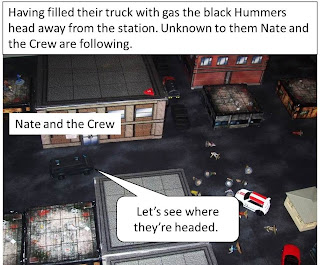 Overall a quiet game  in part to two of the PEFs being resolved as increase the ER by one point. Luckily Nate was far enough away from the security teams so when Zeds were generated they weren't close to the Crew. If the PEFs were resolved as Gangers or Survivors the resulting firefight would have generated many more Zeds than what showed up.