An Affair of Outposts; Portugal 1810

I'm working on an Encounter for an upcoming game. The working title of the game is "Baker Rifle" however the published name will likely differ.

"Baker Rifle" takes the "Long Rifle" game play and ports it to the Peninsular War. In the game player's will command a section of infantry or cavalry while having to contend with the enemy, guerrillas/bandits, deserters, provosts, and hunger. Encounters will include the usual scouting, raiding (as attacker or defender) and a few other things like foraging and outpost duty.

This is my first go at the outpost encounter. The idea is that my section has been tasked with a section of regiment's piquet duty. This game takes place at night. 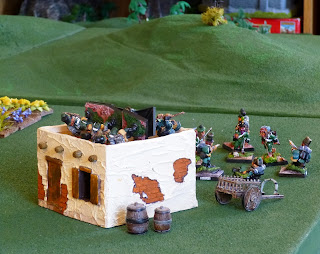 The other four men have been set out as videttes. 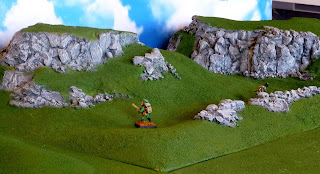 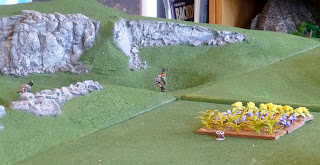 Brigadier Antoine Fortune de Brack, wrote that at night it is better to keep your videttes in hollows rather than on heights. In this way any approaching enemy will be silhouetted against the skyline as they approach.  As the dear Brigadier knew more about the subject than I could ever hope to, that is how I deployed the four men assigned that duty. While it would be hard to make a hard and fast rule for how sighting at night should be handled in a game, I decided to go with opposed challenge tests for sighting an enemy for the first time. If the figure being sighted is on higher ground than the figure trying to spot him there is a positive modifier for the spotting attempt. The  reverse also holds true so that trying to spot a figure at a lower height is more difficult.

Having deployed my forces it was time to deploy the PEF's. One Possible Enemy Force was deployed per two foot of table frontage, giving three for this game. 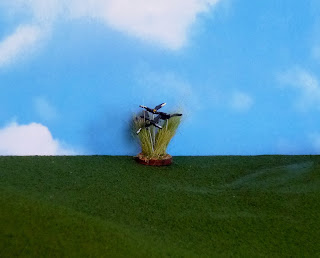 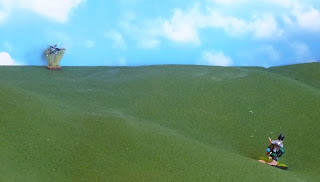 One last thing to mention is that for this game all light infantry and grenadiers were rated Rep 5, while all line infantry would be Rep 4. This allowed me to concentrate on play and not worry about what figure had what Rep.

The enemy force table was heavily weighted to light infantry and grenadiers as these would be the most likely troops to be pushed forward first when moving on the enemy.

I also rated all of the PEF's as Rep 3 to represent the difficulties of night movement and coordination.

The game started with the center PEF moving onto the hill top and into spotting range of my videttes. 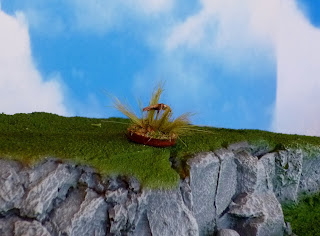 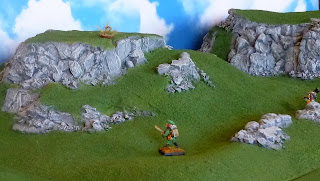 This turned out to be a party of 12 or so voltigeurs, the leader silhouetted against the skyline. One of the ever alert Rifles fired dropping his man and signalling that all was not well. 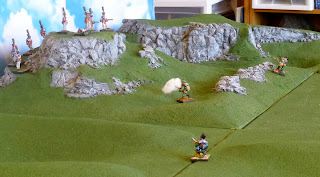 Two of the Frenchmen moved to take care of their fallen leader while another two returned fire. One musket misfired but the second severely wounded the Rifleman.

Following on from this the videttes fell back while the sergeant sent one man to wake the sleepers and set the other five out in a fan towards the front. Figured it was too soon to send word back to the grand guard without having assessed the threat. 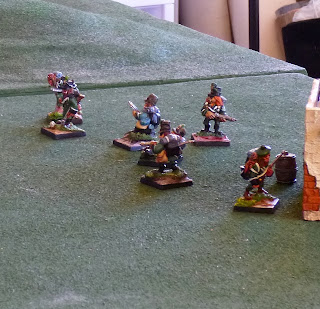 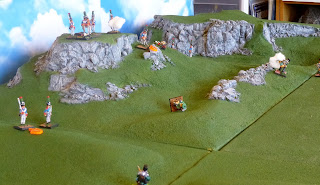 Firing continued and casualties fell here and there. The two flank PEF's remained fairly motionless for a few turns an then the left flank PEF moved forward. 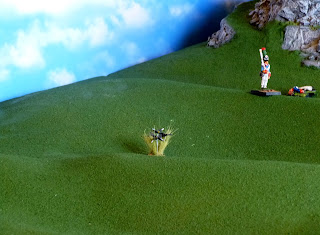 This turned out to be a party of six grenadiers. 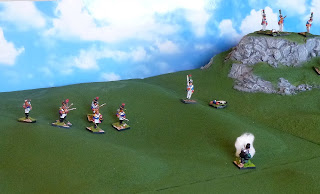 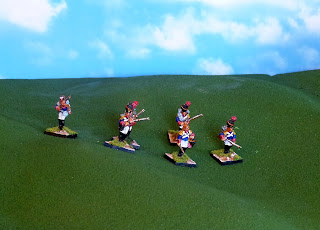 The right flank PEF also moved forward but no one was close enough to spot it. 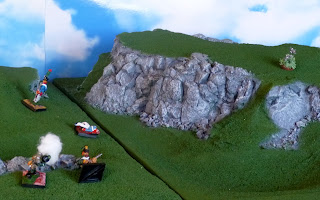 At this point a couple of random events occurred with one affecting the French and one the British. 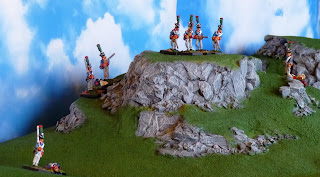 The voltigeurs inexplicably retired back behind the hill, giving my skirmishers a  much appreciated break. 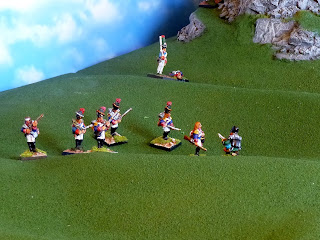 Then my left most figures, blood up apparently, single-highhandedly charged the grenadiers, only t receive rough handling from their sergeant... 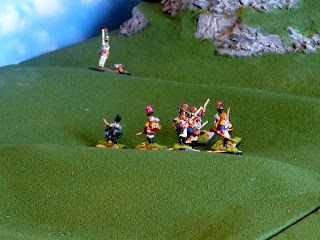 ...and an escort back to French lines.

The voltigeurs reappeared and the firefight commenced afresh. 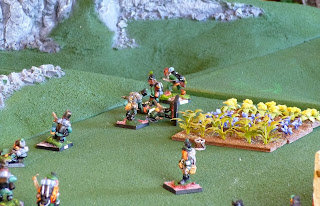 Casulties continued to mount and men were compelled to leave the firing line to prevent their capture. 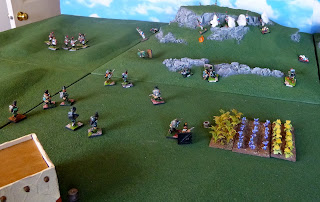 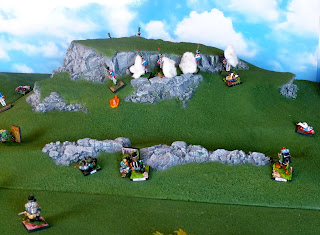 The grenadiers continued to advance and were soon firing as well. 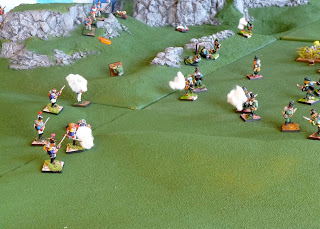 Another random event found one of my men getting lost in the darkness and wandering about quite uselessly.

Still the grenadiers were stopped in their tracks and the situation began to stabilize.

That was when the right PEF was revealed to be a party of line infantry. 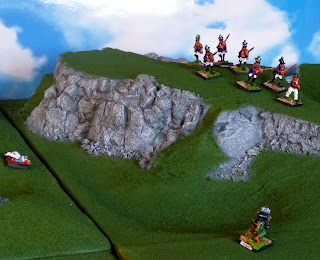 Now outnumbered two to one, I sent word back to the grand guard and made ready to withdraw. 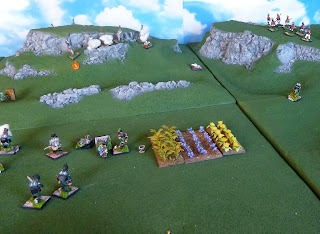 The French proved none to willing to pursue and my section faded away into the darkness.

My losses were three other ranks wounded and three missing presumed captured. The French lost a similar number killed and wounded.

It was a fun game that spurred some other ideas regarding night combats in the game. The combat rules themselves worked well although here to there is an opportunity for tightening things up a bit.