"You say you want a revolution. Well you know, we all want to change the world."

"What'cha whistling Lt?" he asked.
"It's a Beatle's song," Lt. replied as he looked at the Long Range Scanner. "We got company."

****************************************
It had been three months since the "revolution" had begun in earnest and Palos V had declared independence. This was quickly followed by two other smaller Gaea Prime colonies. As the colonies were three Rings away from the GP Home World there would be little interference. Being in Xeog and Zhuh-Zhuh controlled space, meant that the worse case scenario, would be a visit from Gaea Prime Planetary Defense Forces. But that would be a stretch as the local PDF were actively participating in the revolution. Lt. Jihnsin, formerly of the PDF and now in the Palos V Liberty Fleet, felt comfortable in the fact that the Fleet could handle anything the PDF could throw at them.

At the start it had been rough going as the GP merchants stopped coming by but once the Hishen Freedom Ships had arrived, with much needed supplies, things were beginning to look up. Lt. Jihnsin was now concerned with convoying local supply ships between the colonies.

So the sudden appearance of a Delta Squadron of a Star Navy Patrol Fleet was startling.


The Rebels increase their speed to close the gap as fast as possible. Incoming fire from the Star Navy causes some damage, one of the Rebel ships explodes.
After three turns of taking damage the Rebel destroyers get within missile range. Six missiles are launched! 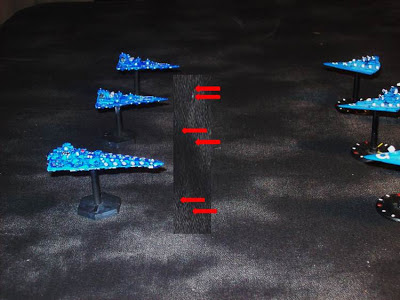 Only one hits home causing hull damage to one of the Frigates. The Light Cruiser fires it's two AA batteries, shooting down the two heading towards it. The second Frigate evades the other missiles.
The Star Navy continues to fire their guns but suffer bad marksmanship, especially the Light Cruiser. 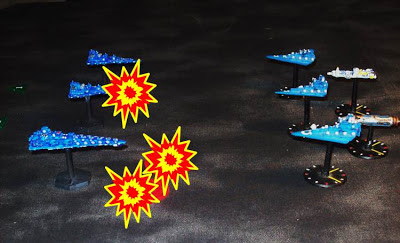 As the ships close almost to contact the Rebels veer starboard and launch another salvo of missiles. These cause more damage and even a bridge hit. But damage control kicks in and the Star Navy ships continue to fire, and begin to lock in. 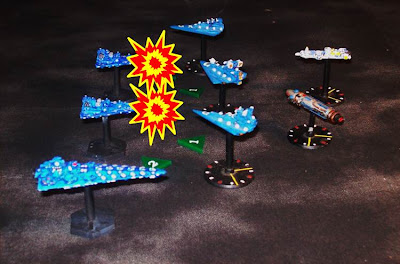 Finally the gunfire of the Light Cruiser scores a direct it and the Rebel Flagship explodes. One of the Rebel destroyers breaks off and the Merchant ships surrender. 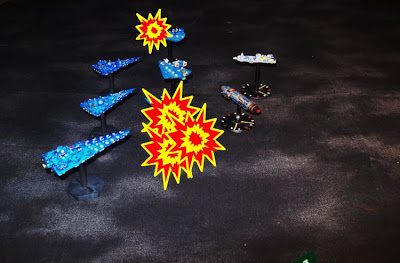 As the last Rebel destroyer warps out the Merchants prepare to be boarded.

*********************************************************
The two Star Navy Frigates took minor damage but the Light Cruiser was undamaged. Two Rebel destroyers were destroyed, including the Flagship and the two destroyers that escaped would be out for a month while repairs are done.
The two Merchant ships were captured, their crews set adrift on Life Pods set for the two smaller colonies to spread the news of the supplies that would not come.
Upon the news of Gaea Prime naval forces operating in the 4th Ring Zhuh-Zhuh and Xeog diplomats were sent to Gaea Prime to file their protests in person.
Posted by Ed the THW Guy at 21:27
Email ThisBlogThis!Share to TwitterShare to FacebookShare to Pinterest
Labels: 5150 Star Navy, AARs, Two Hour Wargames