Warrior Heroes - Legends is the fantasy immersion game from THW coming out next month. WHL is compatible with Warrior Heroes - Armies and Adventures and tied into Rally Round the King, our big battle set of rules. All three share the same setting, the world of Talomir. Characters can be easily imported between the different rules. 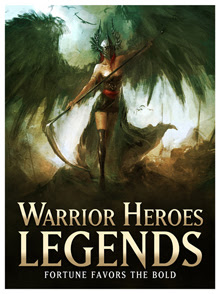 One feature of WHL is players can choose to be one of over twenty character and race types. In this step by step AAR I will start as a Feral Vampire. Here's my Feral Vampire Star and his fledgling female partner. I set up a Wandering Encounter. 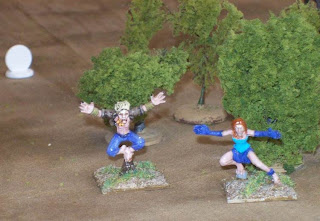 The game starts in the Mirholme province of Land's End a predominantly wooded area. The Encounter Rating of the Province is 3 and I start with 3 PEFs, Possible Enemy Force markers. 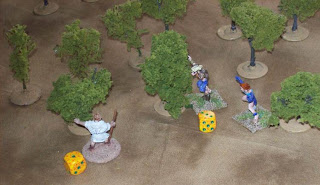 The Feral Vampires setup in ambush in a wooded area. They would wait for unsuspecting travelers and gain the advantage. They didn't have long to wait. The first PEF moved into sight and was resolved as a Mirholme Healer in search of herbs for making potions.

Both sides rolled their In Sight and the Vampires won, see the yellow d6. In WHL only the Leader of each group rolls In Sight, different than other THW games. If desired, the option is there to have individual figures roll but as melee is the primary form of attack, this works better. 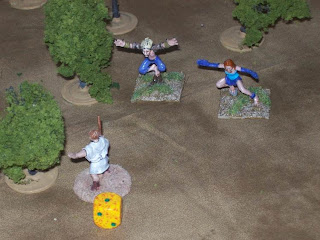 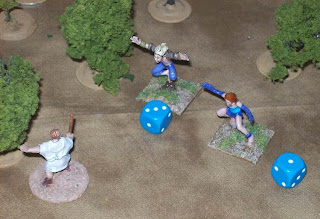 Angus, the Star, decides to let his fledgling, Eveleen go first. I do this for two reasons. In WHL you can improve your Rep if you have a successful Encounter. You have to take an active part to count a success so Eveleen can go first. The Healer is subject to Fear and should be easy prey. 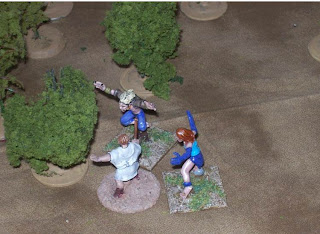 Eveleen scores four successes while the Healer scores one. This is bad news for the Healer is two ways. First he has lost the melee and is at risk. But having won by three or more successes the Feral Vampire may have poisoned the Healer. If he survives he must test to see if he has become a Feral Vampire. But Eveleen has no intent on him surviving. 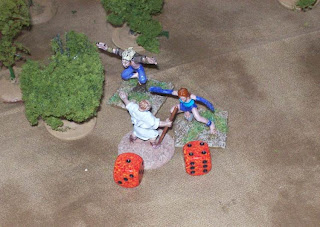 Rolling for damage (1d6 against the number of successes more scored) Eveleen scores a "6". This is a new feature with WHL. When rolling a "6" the loser retires 2", the winner follows, and another round of melee is immediately rolled with the winner getting a +1d6 bonus. This represents those heroic combats where the combatants go back and forth, like in the movie Princess Bride. 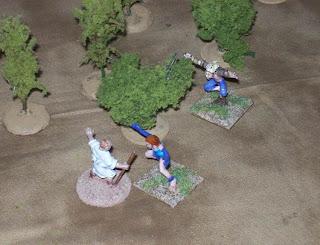 The next round of melee is fought and Eveleen wins again, this time by two successes. 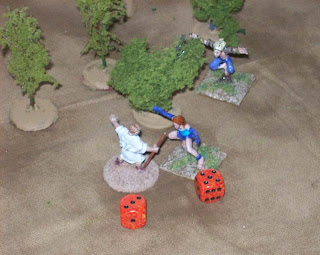 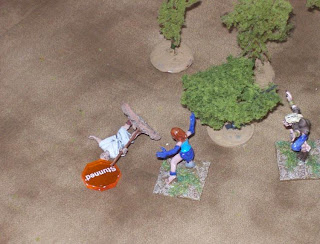 But Angus has not acted. He charged the Healer but it wasn't resolved so he is allowed to follow the retiring Healer and when he goes down Angus is on him. 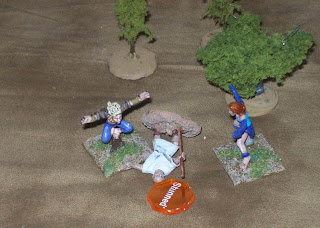 The Healer is defenseless. Angus goes in for the kill. The Vampires will eat well. 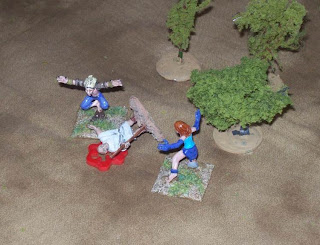 But the next PEF now activates and comes into view and must be resolved. Goblins! 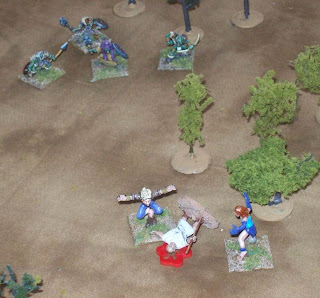