Chapters Five and Six - Death in the Valley

Three months have passed and it's been terrible so far. Only four months left in the season and Thomas can only hope that things get better. But unfazed the trio continued on. It was getting towards the end of the month and time to check the traps. The terrain was intensely wooded and great care was taken to move deliberately. On the way they ran into two parties of British Irregulars. The first inquired if the party wanted to join them but Blue Shirt politely declined. They were a bit more pressing on Thomas and Joshua but to no avail. Later they met up with another party of British Irregulars who were a bit friendlier. But that was all as they made it to the traps and recovered 8 fur bundles. Not bad for the month. This gave them a total of 12 bundles for the season.
************************************************************
Each trapper can carry up to three times their Rep in bundles. This would be a total of 36 that could be carried before they would have to stockpile them somewhere. Only three more months so that didn’t seem to be a problem.
So ended June… 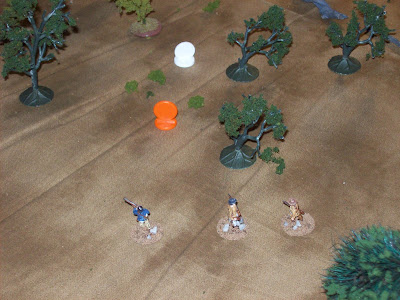 The hunters encounter two PEFs very close to each other, a potentially dangerous situation.

Rain. The middle of July and a freak downpour covered the hunter/trappers as they made their way towards their traps.
“It will get worse before it gets better, “Blue Shirt said as he looked skyward.
“Feu!”
One of the first words Thomas learned in French was the word for fire. So when he heard it he did, at the fellow who was shouting it! But he missed. The French NCO fired at Blue Shirt but struck a tree instead. Joshua fired and missed while another French soldier drew a bead on Thomas and fired….misfire! The last French soldier fired and missed as well. 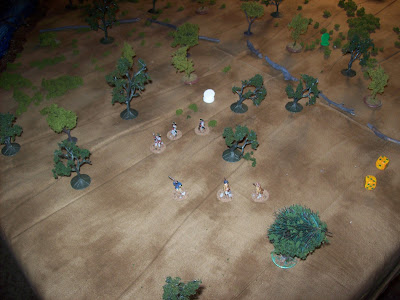 Blue Shirt raised his rifle and shot down the French NCO who tried to charge. The misfiring Frenchman didn’t have the stomach for bayonet work and stayed in place. The last Frenchman charged and stabbed Joshua in the head with a bayonet, sending him to the ground out of the fight. 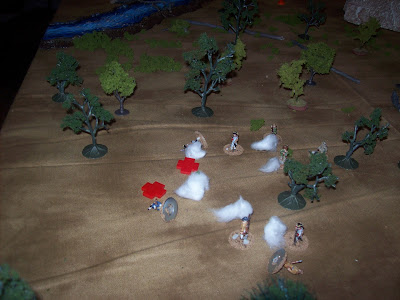 The second PEF is revealed and three French Irregulars join the fight! 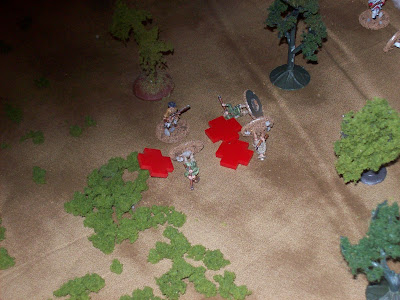 After a near run thing three dead and dying Frenchmen and a thirst for vengeance. 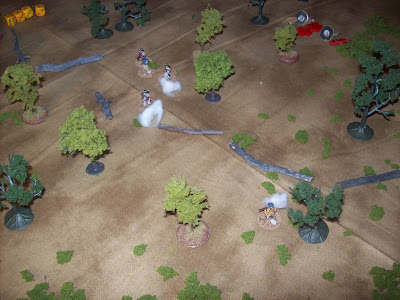 Thomas confronts the Frenchmen.
Thomas pulled his tomahawk and the French NCO charged, bayonet at the ready. Thud! Thomas buried his tomahawk in the NCO’s chest. As he fell to the ground Blue Shirt surprised the French soldier next to him and broke his neck. The third soldier fired but missed. Thomas charged forward and retrieved his tomahawk. Blue Shirt picked up a dropped musket and readied himself for the attack that never came. The French soldier turned and ran into the brush.
*********************************************************
Here's a brief recap of the events as they went to hell. The hunters activate first and move. Then the other side activated and the first PEF moved into sight and it was resolved as three French soldiers. Blue Shirt (Rep 5) ends up going last with zero successes during the In Sight.  In fact he couldn’t even act. At least he shot down the NCO when he was charged. Joshua missed his shot and was promptly bayoneted as the French were active and charged into melee.  Once the turn ended the other PEFs moved and the next one was resolved as the three Irregulars.
This triggered another In Sight between the hunters and the Irregulars and Blue Shirt went down.  That left three Irregulars and two soldiers against me. See ya! The Irregulars ended up pursuing Thomas and I realized that there was no way to escape as they activated first. That’s when it was melee time. Bottom line if Thomas didn’t have the Lucky Bastard attribute and changed the first OD to a miss he would have been dead in the first combat. The only reason he ended up winning was because of that and the Star Power benefits and it was still a very close fight.
It made sense that Thomas could go after them and rolling on the After the Battle Table left Joshua dead and Blue Shirt recovered enough to move. I switched to a Hunt Encounter and used the Tracking Table. It got me to musket range but they went first. Luckily they missed, Blue Shirt took a successful Challenge to get into melee with one of the soldiers and the NCO charged. Thomas could shoot if he was able so I decided to throw the tomahawk. Lucky hit. After that the In Sight was over and the last soldier failed his morale and ran.
This game is pretty intense at times. I counted this as a lost Encounter as for checking traps. Went back and buried Joshua. Got the fur bundles from him as well and we could still easily carry them. We had 12 and the most we can carry is 27. Only two months left in the season.  And so ended July…

Posted by Ed the THW Guy at 12:09
Email ThisBlogThis!Share to TwitterShare to FacebookShare to Pinterest