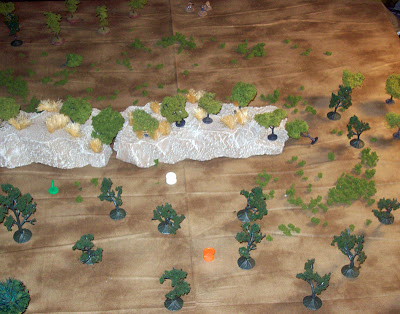 The table was mostly wooded with a long wooded hill cutting the table in half. All the PEFs were placed behind the hill in three different sections. 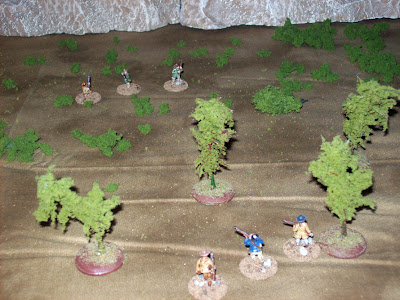 The Frenchmen sprint across the clearing hoping to reach the woods before being seen. 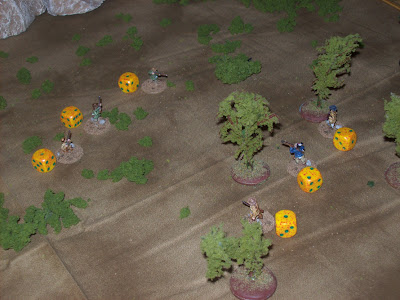 Too late! The hunters reach the edge of the woods and all sides take In Sights. A d6 is placed next to each figure than can act during the In Sight. Blue Shirt, Thomas, and one of the Frenchmen will go first.
The three hunters made their way to the edge of the woods and saw the three Frenchmen as they were still in the clearing. One of the Frenchmen dove for the ground as soon as he saw them. One fired at Blue Shirt and missed. Blue Shirt shot him in the chest. Thomas beat the last Frenchman to the shot and fired, hitting him in the chest as well. Joshua fired at the prone Frenchman and missed. But it was enough as the Frenchman didn’t have the stomach to continue the fight and ran back towards the hill.
"Look!" Blue Shirt said, pointing towards the hill that the Frenchman was running for. "I see three more French." 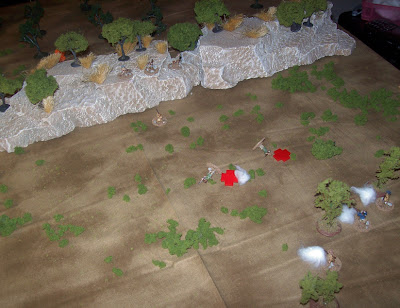 The 2nd PEF is resolved, more French!
"And there," Thomas pointed."To the right of them, there go three Indians." As the hunters watched one Frenchman went over to the Indians. They could see him pointing in their direction. 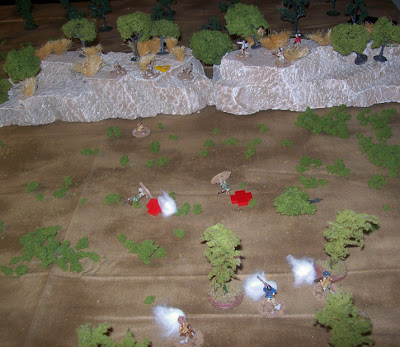 "Let's go," Blue Shirt said matter of factually.
"We could take them," Joshua said as Blue Shirt and Thomas turned to leave.
"No money in that," Thomas replied. "You want to fight? Go join the army."
************************************************************
After the quick exchange of gunfire the second PEF moved over the hill and into sight. This triggered it being resolved. It came up more enemies, more Frenchmen. Almost on cue the final PEF moved and came over the hill. Neutrals, Indians this time. Because the French were close and in sight they had to resolve the interaction with the Indians. Passing a Challenge Test meant that the Indians, at worse, would not get involved and at best join the French. A 2d6 roll resulted in a pass Challenge. I realized that we weren't here to fight but to trap and hunt. I decided it was time to leave. Did I choose an Investment Level that was too high or was I just unlucky? Mathematically I would say unlucky but all I knew is the one Encounter for the month was wasted.
Thomas didn’t gain any Fame Points as the Encounter was to set the traps, not fight the enemy. So ended March…
Posted by Ed the THW Guy at 09:37
Email ThisBlogThis!Share to TwitterShare to FacebookShare to Pinterest