After a successful diplomatic mission in which  you were sent to the Border Kingdoms to get cavalry to fight the Orcs, your king Einar now sends you to try to talk to the mysterious Elves from Lothgolin for an alliance treaty as they are also under the invading Orc threat .

Three of your rangers volunteer to accompany you and the king provides steeds for all (this is going to be my first Encounter on horses!) so you run for three weeks through the North border of Mirish, passing below Gorath and Bal-A-Tor and towards Lothgolin (see map of Talomir).

In the second week they have an encounter with a solitaire Orc who reluctantly agrees to barter with them but what Eilif wants is information. The Orc either doesn't know anything about the Orcs uprising or he is lying, in any case he decides to kill it just in case. After registering his belongings Eilif gets 1 Increase Rep d6.

They finally reach the borders of Lothgolin and explore the border trying to find a safe route through the woods...

This is a Wandering Encounter in which you have to resolve at least one PEF and then exit through the opposite side of the board. There are three PEFs, and being in Wilderness and in a C Area, the Enemy Rating is 5 and that means that Eilif is probably going to meet several groups! 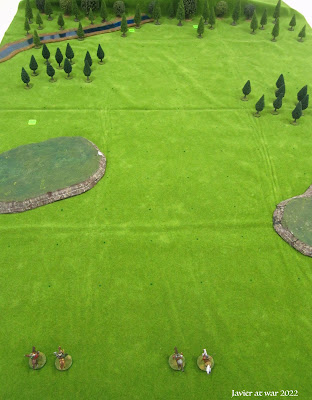 The PEF from the left doesn't move but the two at the top do and one is resolved as soon as it gets in sight. Eilif and his men hide behind a hill to avoid resolving more PEFs. 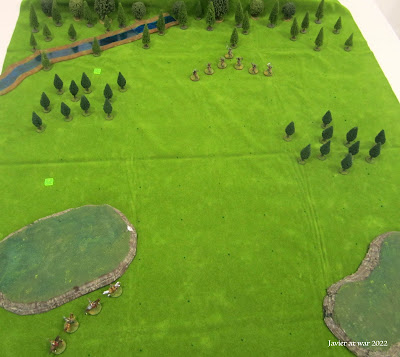 The PEF (Possible Enemy Force) is a group of seven Orc Wolf Riders! 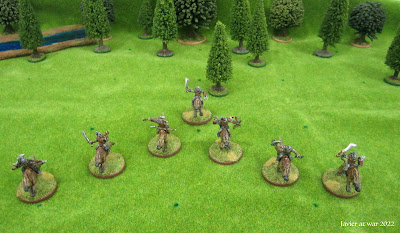 In their Activation they move as fast as they can towards the men. 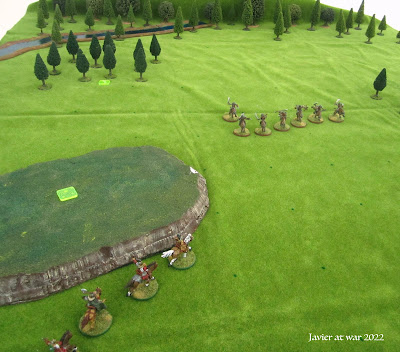 Eilif is now Rep 6 so they activate first and move out from the hill and reveal another PEF, a Troll! Then they shoot at the Orcs, killing just one.

One of the Orcs charges and leaves one Ranger Out of the Fight (OOF). Eilif hopes he's snapped his neck as they don't have time to stop and check. 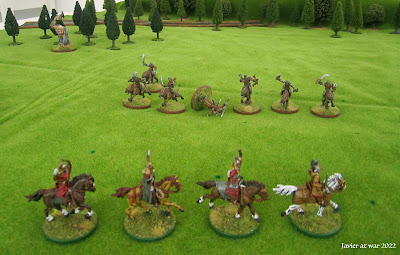 Eilif and his men try to escape bordering the wood and the last PEF is resolved, a group of eleven Goblin archers! The Troll and the Wolf Raiders pursue them, but riding horses is great to run away from the enemy. 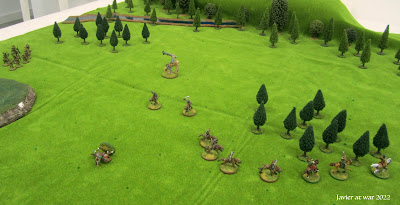 Afraid of getting surrendered Eilif and his men turn back and charge at the Wolves, killing three of them and making another one flee in terror. 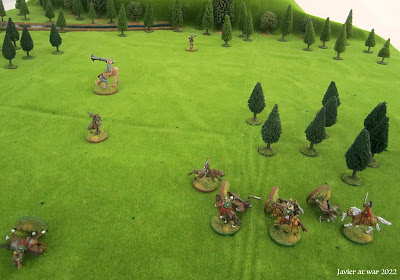 Then the last two Wolf Raiders charge at them but are defeated. The Troll and Goblins hasten behind the Rangers. 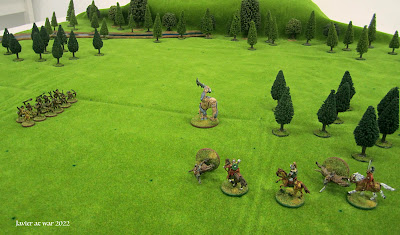 The Rangers shoot with their bows at the Troll who seek refuge in the forest, then the gallop towards Lothgolin. 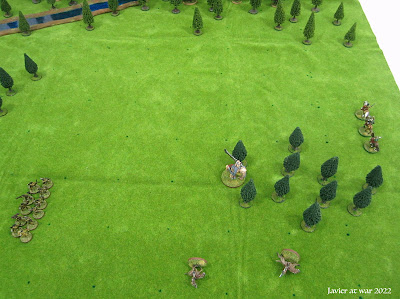 The Rangers keep galloping are close to reach the woods of the Elves. A new PEF appears and is resolved. It is a group of two Dwarves. 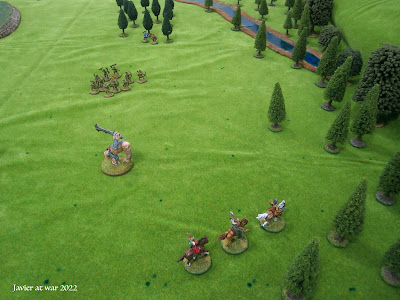 The Troll keeps running after Eilif and the Goblins shoot at the Dwarves who enraged charge and kill two of them, causing another to flee. 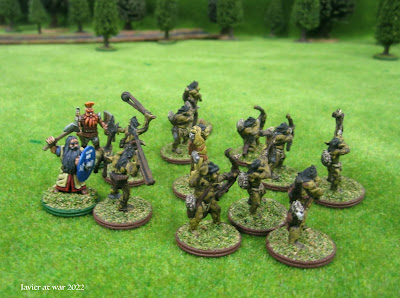 The two Dwarves charge again and kill two more Goblins. Chop, chop! The rest can take it and flee in despair! 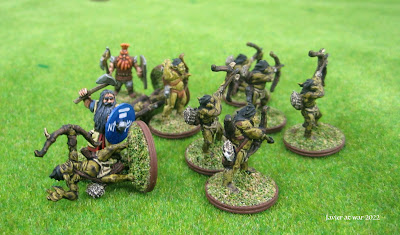 Now the Rangers activate and prepare to leave the area but they decide to shoot one last time to the stupid Troll. They miss and the Troll reacts charging at them. After so much pursuing he finally gets them! 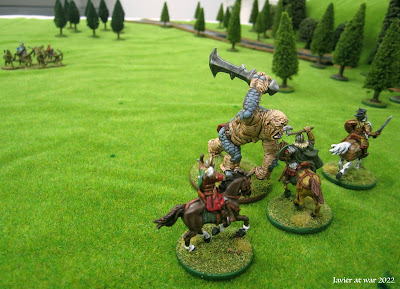 Luckily, the Troll wasn't very good and the Ranger could kill it.

Then Eilif's horse throws him to the ground with so bad luck that he snaps his neck; he is dead! He uses his Star advantage to try to survive and rolls 6d6 but only gets one success and now he is OOF. After that he uses his Extraordinary Effort and rolls one more die with success, escaping unscathed by a hair's breath in the end! 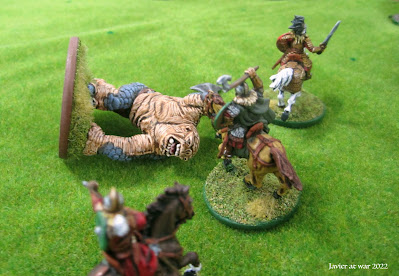 Then the Rangers dismount and together head to where the Dwarves are waiting. They are followers of the Black Moon but the men of Mirholme are Neutral, and more than them so they finally talk with them. Eilif spends 1 Increasing Rep d6 in Sweet Talk and manages to get some information from them, making the ER of the area one point lower. They also offer to barter but Eilif is not interested. 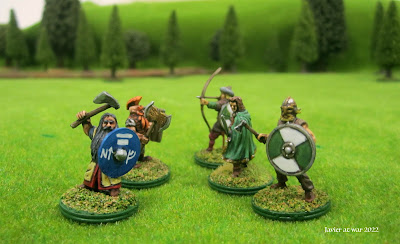 Later they check their fallen comrade but he scores two sixes in the After the Encounter Recovery Chart! He is dead and already cold and stiff.

Finally they loot all the Orcs and the Troll, the Goblins are for the Dwarves. They get a magic Armour of Protection and the Sword of Rage. They also collect 6 Increasing Rep d6 from loot plus an extra 1d6 for a successful mission, but they also lose 1d6 for Eilif using his Star Advantages, 1 for loosing one men and 3d6 in his men wages.
Posted by blacksmith at 03:30
Email ThisBlogThis!Share to TwitterShare to FacebookShare to Pinterest
Labels: Warrior Heroes Armies and Adventures